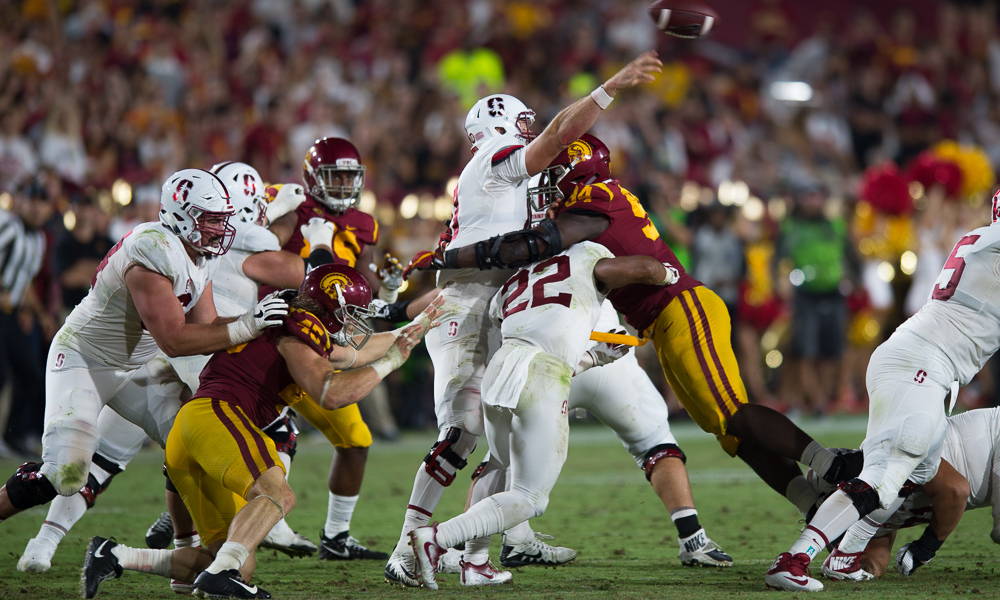 So here we go with early season Pac-12 opener Stanford test. For this season, it’s a lot different than last year. I’m going to focus on defense in a little bit. However, the change of personnel is dramatic when compared to the first 2017 Stanford game. Just a few names to think about;

This is not meant to be a collectively exhaustive list but just a reminder of how different certain personnel packages are now. Stanford’s biggest change is the loss of Harrison Philipps (NT) who I thought should have been the Pac-12 defensive player of the year in 2017.

Here’s what I think Stanford is going to see this Saturday from Coach Clancy Pendergast. This is a bit detailed but trust me, I’m not giving away the secret sauce. Stanford coaching staff is one of the best around and they can watch film and compare comprehensive notes a lot better than I can. My advantage is I know CP’s philosophy and have been examining his approach for three years now. Here’s some bullet points to consider;

• On 1st down and certain 2nd downs CP will walk Mike & Will backers into the A-gaps. This is a press defense on the LOS (line of scrimmage). This will cause the O-line to make a call about pulling O-linemen or likely checking down to a more vanilla blocking scheme. We usually use this on 3rd downs against balanced RPO offenses. Please note, we saw none of this against UNLV. This may be the same approach we saw last season when Western Michigan ran successfully against our vanilla defense. I expect to see to see the same upgrade in performance this game against Stanford as we saw last year after WMU then Stanford at the Coliseum.

• We know that 1st down efficiency is critical for both teams. We have to lock down 1st down running plays. Costello will read the ILBs in a walk-up A-gap look and may want to audible to a fade or quick slant. If we sense or saw that a few times, Smith and/or Houston will back off into the throwing lane.

• Stanford will use delays, motion and isolation formations to create mis-matches. Good, they are a sophisticated power run first team with a much better QB than last year. Let’s see if we can force them into a spread look. That’s not their bread-n-butter. Our secondary is much better too than last season and matches up well against the big WRs and TEs. We’ll be better prepared so let’s see what happens.

• This is an identity game. Good again. Establish our 2018 identity against a quality opponent on their field. Bring it on!

• CP will use 2, 3,4 and the occasional 5th DL (goal line) as he did in both games last season. And this year we can use more stout and quick DL options than before. One variant that I think we will see is 1st down package of 4 DLs, and 6 LBs/Safeties with one Safety playing centerfield. Won’t see this one a lot as it’s a gamble but it definitely says “you ain’t running” and force an adjustment or even a called timeout by ‘Furd.

• What about Love? Like his 75 yard TD last season first game? Yup, I know. That play was classic Stanford with pulling guards, block down TE screening the inside pursuit, Cam Smith getting held and a 4.3 speed awesome running back with a lane that was 5+ yards wide. Take it away and don’t do that again. Simple – yes; easy – no.

• Put Porter Gustin on the weakside away from the TE. Turn him loose same as Uchenna Nwoso last season. Use Jordan Iosefa on the strongside against TE or even the motion H-back that Stanford uses.

• Our tackling was suspect last week. How about pads for Wednesday’s practice with the proper drills?

• Our kick return, punt return units are light years ahead of last season. Perfect timing for that improvement. Kick off touchbacks are now a strength. Ok, so we need to punt the ball. My guess is that is getting the proper attention it deserves.

Well Trojan WeAreSC.com family, there it is. But also note I didn’t mention too much about secondary coverages and that is a secret better left for this Saturday.