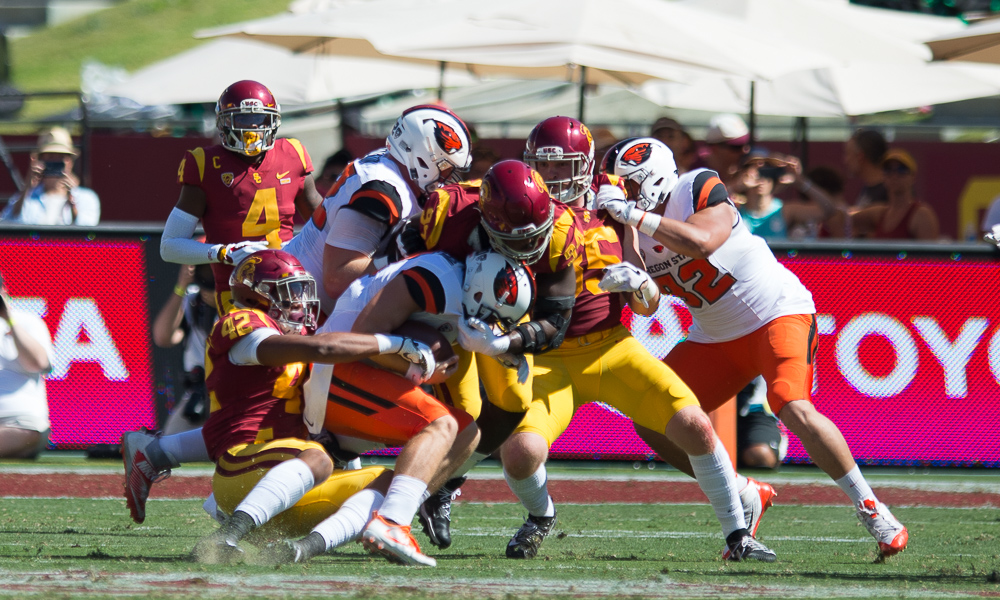 Against Cal it was “winning ugly”, against Washington State it was “losing ugly” but yesterday against Oregon State it was just ugly. There isn’t much question in my mind that any of our remaining opponents could have beaten us like a tom-tom drum yesterday and in some cases would have run up the score. Don’t let the stats, the positive tones from coaching staff interviews or general sunshine pumping deceive. This team is currently struggling mightily and must improve in six days or ugly gets worse…a lot worse. I must tell you the truth and be straightforward, so that’s what follows next. It may not be comprehensive but it is a descriptive of yesterday’s effort and results.

But let me take a moment for the highlight of the game. Jake Olsen’s performance on and off the field again and that’s more than just a “feel good” though it is that. It was necessary as the starting snapper got hurt so this was very real too. Jake is a fine young man from a fine family (hats off to his parents, Brian & Cindy, who are likewise just wonderful people). And thanks to Oregon State for their sportsmanship too. Nicely done.

What we saw on defense was this; the good players, even those that are dinged up, played pretty well – Nwosu (co-MVP), Green, Fatu, Smith, Tell (co-MVP), Rector, Dorton and Jones (majority of the time). While the others were a mixed bag ranging from out of shape but game DT (Pili) to spotty production (Biggie) to poor effort from too many others. When I see certain players trailing a play and just jogging with no apparent sense of urgency my blood boils (e. g. Houston, Betiku and Murphy). What is going on here?
As a reminder, it’s a privilege to wear the Cardinal & Gold and play this game…a privilege which can be revoked at any time by injury or replacement. My Dad (former Huskie and 49er) taught me to never have any regrets regarding my preparation or effort, and I don’t. Of course Coach Goux reinforced that point as only he could. Heck, the University named the dang practice field after him because he knew that we would win or lose games depending on our preparation Sunday thru Friday. For the record, our secondary coverage yesterday was a confused mess at times. Oregon State did a nice job throwing multiple formations and motion to confuse and slow down assignment recognition.

Oh, did I mention that to the extent there are any team bright spots, it was the above-mentioned defense and to a lesser extent our placekicking?! I doubt anybody could have missed but that offense on the field is well and truly a mess right now but that’s a different discussion.

Much has been made about our ineffective 3rd down and medium-to-long defense. A review of the data actually tells an interesting story specifically to this dynamic. No argument that we’re letting people gain too much yardage in certain critical situations. But let me show you our 3rd down effectiveness yesterday as follows by OSU series:

So, the upshot of the 3rd down defense was effective stopping conversions (3rd downs only) 7 out of 13 attempts; conversely State was effective converting (including by penalty) 6 of 13 or 46% but no 3rd down conversions in the first half. The target to accomplish really effective 3rd down control is 33% or less, so we were deficient in this category and against a weak opponent against an offense starting a former walk-on 3rd string QB but without their best running back available.

So, what does this all mean anyway? Right now, the defense is playing better than the other units but still far from what would be needed for championship form. Utah, while losing to Stanford, is a very tough opponent with a very physical running game with a RPO style QB. Time to get to work this week in practice as it doesn’t get any easier followed by a trip to South Bend in two weeks and the Domers will be coming off a bye.

Btw, some of Sam’s struggles are upfront with the line, some with connecting with receivers and some is just in his head. Defenses are taking away our run game by design and then max pressure and pack short to intermediate passing lanes with coverage. The running game needs to be fixed ASAP. You fix a powerful run game then Sam is just fine. But how to fix this run game that looked so good against Stanford and choppy to unimpressive both before and after? Add power blocking schemes, focus on a gap and attack with point of attack blocking. Gasp, even consider a fullback lead blocking. These additions make the O-line more comfortable, pounds the defense so as to slow them down (much like body shots in boxing). Last night I saw Colorado use the I-formation with a fullback and QB under center…and there it was, 23-blast…results – two touchdowns from the 1 and then 2 yard lines. Yup, old school which is now new school still works.

PS: Shout out to Matt Fink for a great run and a much needed energy booster. I wish they had let him air the ball out too.