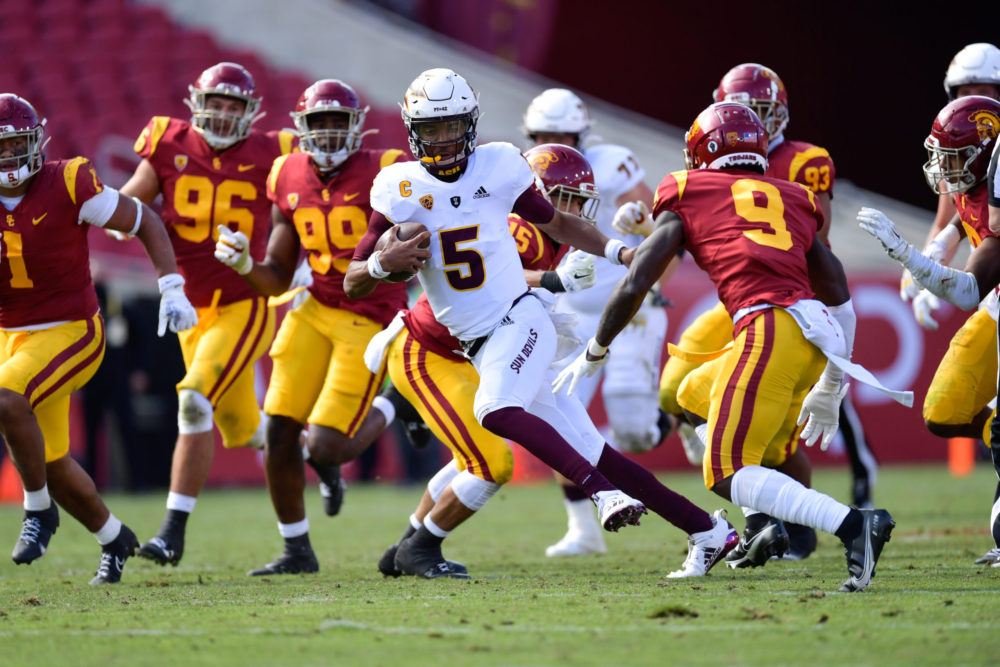 So here we go…again. We just stole a victory from ASU with less than a minute left in the game in a very improbable way. This was a game to take the under and the points, if you’re a betting sort.

Last year it was Christian Rector with a great career-defining play by tipping a pass then intercepting it late in the fourth quarter to turn away a determined ASU team we couldn’t stop with our regular defense. Saturday was even more improbable with a volley-balled tipped pass for a touchdown with less than two minutes to go, recovering a gorgeous onside kick that ended up in our hands, which surprised everyone including Chase Williams and the Pac-12 referees. The fourth-down touchdown to Drake London was picture-perfect, which was required as the coverage was good. The whole game reminded me of a Sam Darnold-type game, complete with poor ball security, spotty defense and a memorable comeback. ASU has got to feel totally snake-bitten. Oh well, better you than me!

Today’s report will include both defense and a little bit of offense thrown in as well.

The defense played with an improved sense of urgency and aggressiveness. This was easily the best improvement factor compared to last season. With aggressiveness and conditioning, the defense can accelerate their needed improvement. And they need to improve.

The secondary had good moments in man coverage combined with a focused push by the defensive line. Remember that the defensive line is not just three down linemen but always included a fourth run or pass rusher. Defensive coordinator Todd Orlando believes in a pressure look and it was generally successful.

Corner back and nickel play was net successful, but a good throwing quaterback and wide receivers that can catch will cause us some serious issues without adjustments. More about adjustments later…

Fumbles caused and recovered were three for three, which really kept the Trojans in the game.

We never did respond to the 31 with an adjustment. So there was always a mismatch unless Orlando brought up a safety or nickel back and put pressures into the backfield.

The long runs were all off the edge or inside zone play that broke to the outside where we didn’t have the numbers. Orlando has to have more going on than add pressure to the backfield as a run/pass quarterback will eat us up alive.

The absolute worst aspect of our defense was inside linebacker play. Palaie Gaoteote spent most of the day out of position at the snap and played standing straight up, making himself vulnerable by exposing his legs to the blockers. Ralen Goforth played better, but is clearly learning his position and was vulnerable to options and cutbacks. I am most disappointed with the inside linebacker play than anything else about the defense.

Defensive line play was A for effort and C+ in performance. The C+ is for getting turned at the point of attack on third downs routinely. This is technique and fixable.

Drake Jackson is not an outside linebacker and needs to put his hand in the ground and play a 5-technique defensive end role. It is his natural position so use him to disrupt the offensive line blocking schemes.

Arizona State threw a simple but effective Cover 2 (two safeties high) with five to six defenders playing a zone combination for short to medium yardage throws. We made no adjustments to this common defense. This is the “BYU” defense that smothered us last season. Until we adjust, we will see this over and over again. An example is move to a Wildcat on third downs and force an adjustment on defense by playing a tough stout run package. If the defense adjusts, bring Slovis back in as quarterback from wide receiver position. Do this a few times, combine with motion and we will really help ourselves and not allow defenses to sit back in Cover 2 and dare us to run the ball effectively.