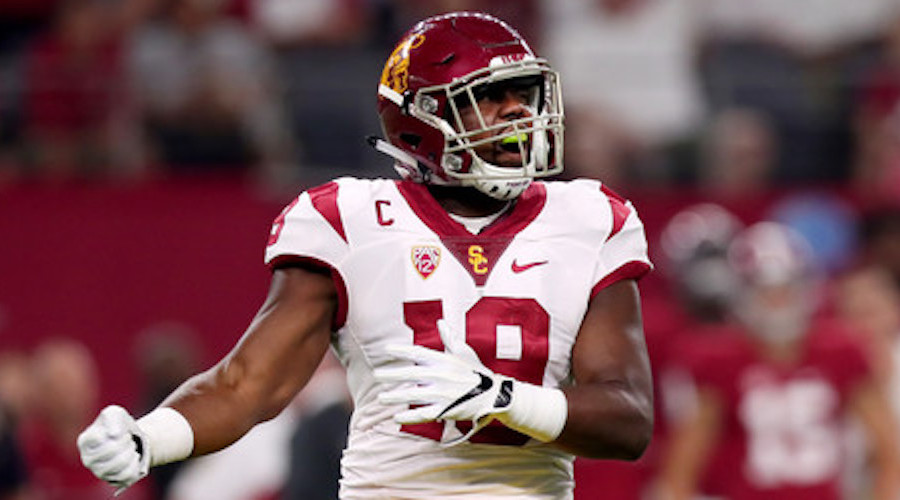 That was an epic beat-down last night in Arlington, Texas. The stink from that game will be around for a long time to come. Just as the 1966 Notre Dame 51-0 beat-down in the Coliseum stuck in Coach McKay’s craw for a very long time so will this one stick in a lot of USC fan’s nightmares. I do wonder what the outcome will be; for Coach it was to recruit better, bigger, stronger and faster players so we would never be manhandled again. That brought us the ‘70’s and three Natties and really a fourth if truth be told. As for Coach Helton time will tell but I wouldn’t take a leisurely pace to get things right. Alabama showed where the bar is set for a championship team and we are nowhere even close to that level right now be it coaches, players, play-calling or defensive schemes.

I guess an epic rant should be inserted here but what’s the point of that? Like you I’m pretty sure I’ve been through all the necessary grief phases…you know shock, anger, denial, and acceptance. And now I’ll write a cathartic analytical article about a defense that got pole-axed by an Alabama team.  With Lane Kiffin [insert preferred descriptor here] smiling like the Cheshire cat after calling for a pass play with four minutes to go and scoring a TD over our entire secondary. Oh and the postgame lovefest he got from the USC players and coaches was quite touching too.

And I really prefer to talk about what worked, what didn’t and why. So let me give it a try.

The defense held up pretty well for most of the first half as both teams were trading 3-n-outs. We used Pendergast’s famous 5-2 which has basically the same look as a 3-4 under (NT/DT offset to the strong shade of the offensive center) except with only two DLs. We used two and occasionally three DLs and a rush end/OLB. Our pass coverage was generally man with both up or back alignment situationally off the WR by the cornerbacks. As for the safeties and nickel back they used mostly zone/zone read with a Cover One and also Cover Two. The defense brought some exotic pressures from generally the edges and outside tackle gaps (5 gap). Here we used a LB, extra safety in the nickel package and corner blitz. Alabama had some trouble with these packages Early-on until freshman Hurts showed up, got over his nerves and then showed he is a more mobile QB who can run and throw. One corner blitz worked well on a 3rd down (1st half) and the other was a total game changing disaster (2nd half first series).

Generally speaking when you force five punts, hold the #1 in the country to 6 of 15 third down conversions and plus one turnover (gross 2.0) we should have a better outcome.

This section can be pretty lengthy given that the defense gave up 45 offensive points in what turned out to be a dismal record setting performance. As a team we gave up 52 total points with 35 in the second half starting off with the corner and safety blitz from Hell. What were they thinking to allow the most dangerous WR that Alabama has to be picked up by linebacker…really?? No way; that was not the call. It was either a called safety blitz or a corner read blitz but not both. Somebody had a brain cramp and that assignment blow really stuck a dagger into the heart of the defense. The air went out of the balloon right then as ‘Bama goes up 24-3 and it was just too easy. Yes I know the offense was a full four quarter embarrassment but the D’s job is to keep it close and not give up explosive plays. Tough assignment on a good day but we had no room for this kind of foul up. After this score and another 3-n-out by our O we started to lose gap control, edge containment and discipline. Frankly we got worn down, smacked hard and pushed around. The results were obvious to anybody watching the game and the explosive plays just started to pile up. Kiffin knew what to do then as the guys were sagging. We got hammered yet Time of Possession (TOP) was only 30:43 vs USC 29:17 which is not overwhelming. No it was the accumulation of physical run blocking, ten 3-n-outs by our offense, a pick six and explosive plays that crushed this defense yesterday.

So let me tell you that I’ve always been a bit skeptical of Pendergast’s defensive approach because while it is a one-gap defense that is by nature aggressive (that’s good) it is not physical with usually only two true DLs. Therefore our LBs and safeties will always be in the run stopping business which means unless it’s a blitz or a pass play the OL is into our second level automatically. That’s a lot of traffic and clutter to navigate to make the play. Against physical teams I believe we put ourselves into a tougher situation unless we win the TOP battle and the turnover battle decisively. I actually think the inside guys played well enough for two quarters plus a bit but it’s all about four quarters and 60 minutes and the ball.

The defense that Alabama played is what we should aspire to. Forget the scheme for a moment and focus on the philosophy of speed, big bodies and disciplined physical tackling. I couldn’t help but notice when Alabama tackled our guys they went backwards when we tackle it looks like we blanket the ball carrier not punish. This is a generalization of course but you get my point. I want USC to play Alabama defense because that is what decades of USC defense has looked like and played like. MacKay played it, JR I & II played it and Pete played it. Ok, so it’s Pendergast’s party and he’s the coach. I can hear the comments, “he was the DC when we lead the Pac-12 in defense”. Yeah and he was DC that brought us Arizona State and 652 yards of total offense (most ever in the history of USC football maybe a one-off) didn’t play Oregon which drove up the performance stats and now Alabama 52-6 another record setter (that’s two dubious records). I want to be a true believer but you got to show me the scheme can wear down the other guy and win football games and keep the score close routinely otherwise it seems gimmicky to me.

And here is a closer quote I just read, “…or as one Oklahoma fan said while he commiserated with a UCLA fan on an airport shuttle in Houston on Sunday morning, “It could be worse, we could be USC.” Ouch! But WeAreSC and I wouldn’t trade that for anything but we need a little help here. I saw Swannie and Sam at the game…neither has any eligibility left so we better get it done with the guys we have right now.