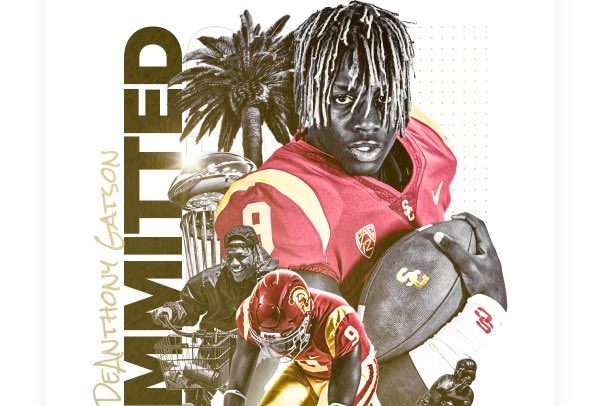 USC stayed hot on the recruiting trail on Tuesday, picking up a commitment from three-star running back De’Anthony Gatson (Newton, Tex./Newton).

The 5-foot-10, 200-pound Gatson picked up an offer from USC this past spring and became a top target for the Trojans coaches, who go into Texas yet again for a prep prospect. He’s been one of the most productive running back in the country the last two seasons, rushing for more than 1,850 yards and 29 touchdowns in each of his sophomore and junior seasons. He averaged 12.3 yards per carry. Playing in a run-heavy offense, Gatson has a great feel for the position and ability to cut and make people miss at the line of scrimmage and into the second level.

He is commitment No. 9 for USC in the 2022 class and puts the Trojans back into the top 10 of the class recruiting rankings. He’s a three-star back, but was getting heavy consideration from Colorado and Texas as well as USC. He visited all three schools in June, but felt USC offered the best opportunity at the next level, in terms of on the field and off.

USC’s running back position has gone through some transition over the past several months. Gone are Markese Stepp and Stephen Carr, who made moves to Nebraska and Indiana. In are Keaontay Ingram and Darwin Barlow, who came from Texas and TCU. Gatson and Barlow both attended Newton High School and played on the same 2019 team, with Barlow as a senior and Gatson a freshman. Gatson rushed 19 times for 234 yards and three touchdowns that season. Barlow recorded just a tiny bit more, finishing with 2,366 rushing yards and 42 touchdowns

Picking up at least one and probably two high school running backs in this 2022 class will be important and Gatson gives the Trojans a good start there. Vavae Malepeai is heading into his final year at USC and the expectation at all positions now is that the depth chart from one year probably won’t look identical to the next year given the ease with which players can transfer now.

USC has a couple of other priority running back targets still on the board, in five-star Oklahoma commit Raleek Brown (Santa Ana, Calif./Mater Dei) and four-star target Jovantae Barnes (Las Vegas/Desert Pines). Brown is scheduled to take an official visit to USC mid-week and the Trojans might be closing the gap on Oklahoma there. The Sooners just received a commitment from the nation’s No. 2 running back, Gavin Sawchuk (Littleton, Colo./Valor Christian) on Tuesday.