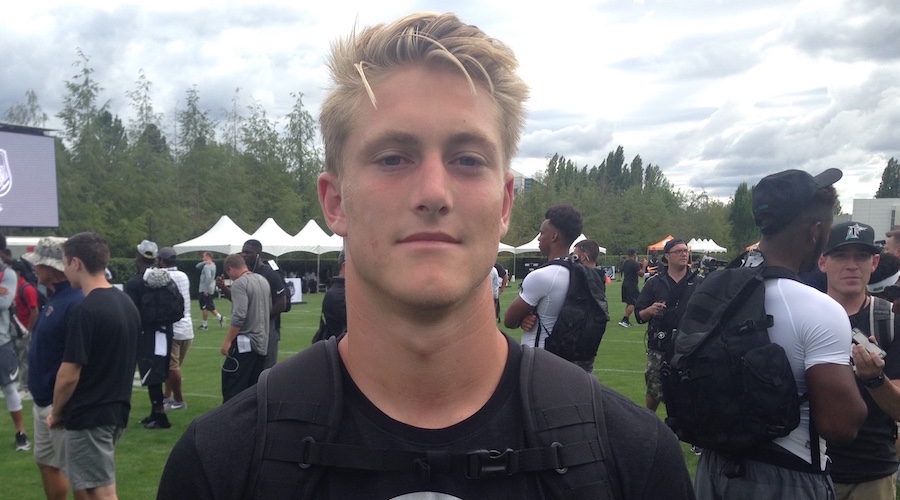 Some quick notes from the final day at The Opening Finals before I head out today:

* USC safety commit Bubba Bolden had a standout day for Fly Rush. I’ve seen him on a number of occasions this offseason, and this was easily his best outing. Showing off his range and instincts, he pulled down two interceptions. One came off a throw by his teammate at Las Vegas (Nev.) Bishop Gorman, Tate Martell, and the other was in the end zone off Tua Tagovailoa (Honolulu, Hawaii/St. Louis). As I wrote in my notes yesterday, Bolden said that the USC coaches have increased their contact with him as of late.

* USC tailback commit Stephen Carr (Fontana, Calif./Summit) had another solid showing for Fly Rush as well, hauling in a number of passes. He looked particularly sharp in the early game that I watched against Alpha Pro, making three catches on the first drive of the contest – including a touchdown grab in the flat.

* But Carr wasn’t able to keep up that level of success throughout that entire game. That’s because when he was lined up in the slot, which was fairly often, Elijah Molden (West Linn, Ore./West Linn) was on him, and the USC cornerback target did a nice job of covering him. That head-to-head battle was one of the highlights of the day. Molden also had a diving pass break-up in the later stages of the contest that caught everyone’s attention, and I was extremely impressed with how he played throughout the entire event. He has USC in his top 4 along with Oregon, Stanford and Washington.

* Staying at the cornerback position, Salvon Ahmed (Kirkland, Wash./Juanita), Thomas Graham Jr. (Rancho Cucamonga, Calif./Rancho Cucamonga), Darnay Holmes (Calabasas, Calif./Calabasas) and Marco Wilson (Plantation, Fla./American Heritage) all continued to perform at a high level as well. Possessing a long build, Wilson was really physical at the line in the contest that I watched.

* At quarterback, both Jack Sears (San Clemente, Calif./San Clemente) and Alabama commit Tua Tagovailoa (Honolulu, Hawaii/St. Louis) were back in action. Of the two, Tagovailoa appeared to have the better day, leading Vaporspeed down the field on a fairly consistent basis. Sears had his moments as well, completing one beautiful bomb downfield at one point, as well as a touchdown pass, but the Lunarbeast offense stalled on the other three or four drives that I saw.

* Jaylon Johnson, Joseph Lewis and Jay Tufele did not participate in the event today.