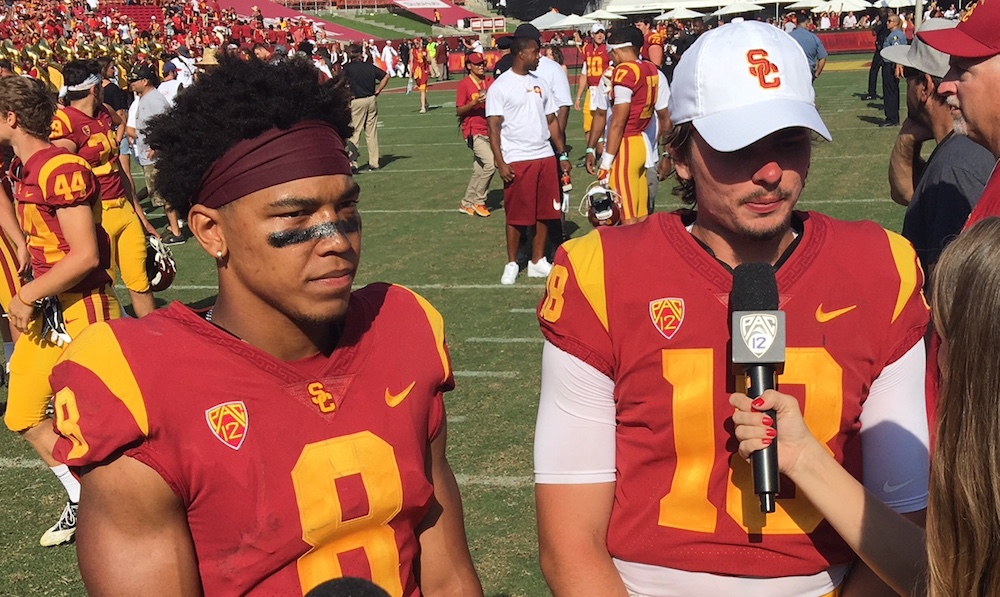 The excitement was in the air on Saturday at the Coliseum not only for the opening game of the USC season but for the promise of what was to come with the potential of true freshman quarterback JT Daniels.

Daniels was certainly the main topic of pre-game conversation for Trojan fans and after a quick turnover was forced by the USC defense to start the game there was an opportunity for him to capitalize on the energy with good field position. Unfortunately it was a 3-and-out and a USC field goal. The crowd was ready to celebrate whenever JT dropped back to throw but it was a slow start as the normally reliable veteran receivers dropped some balls that they usually catch.

Finally, with the ball backed up at the USC 20 late in the first quarter JT looked to a familiar face in Amon-Ra St. Brown with three straight completions to give the fans a taste of what was to come. There was also a 20-yard completion to Trevon Sidney but by the time halftime rolled around it was St. Brown with 6 catches for 55 yards, while the rest of the Trojans combined for 4 catches for 42 yards.

“I was proud of the way the quarterback played today for giving our receivers the opportunity to make plays,” USC coach Clay Helton said. “Those guys will tell you they expect to make all of them and we can do a better bringing the ball down.”

The game stayed close into the third quarter in large part due to a couple big plays from UNLV (a reverse and a fake punt) but at the start of the fourth quarter it was the moment that the Coliseum crowd had been waiting for as JT lofted a 43-yard pass to a wide open St. Brown for the first of what will likely be many scoring connections between those two. The crowd erupted as the Trojans opened the lead to 26-14. Later, an apparent Daniels fumble was reversed and JT took advantage by hitting Sidney on a deep pass and Aca’Cedric Ware scored a rushing touchdown. By the time Chase McGrath hit his school-record tying 5th field goal to make it 36-14, Daniels was done for the day.

His numbers were solid (22-35 for 282 yards and one touchdown) but they obviously could have been better without the dropped balls. Helton was quick to point out the clean element of play with no interceptions, no turnovers and few penalties, along with the fact that the offense still generated some good numbers in a comfortable win.

“Anytime you get so many new players you’re trying to develop a chemistry,” Helton said. “You hope it will come quicker but eventually things start breaking open and you look up and you’ve put up over 500 yards of total offense and 43 points.”

There is no player that Daniels had better chemistry with than St. Brown, who ended the day with 7 catches for 98 yards and a score. There were also 200 yards of rushing put up by the running back trio of Aca’Cedric Ware, Stephen Carr and Vavae Malepeai, and a solid job by the offensive line in only giving up two sacks.

It was clear when the team was leaving the field at the end of the game and heading up the Coliseum tunnel that Daniels had captured the USC fans as he was given the rock star chorus of cheers following his first win.

“It’s hard to put into words my first time in the Coliseum, it’s goosebumps, it was really magical,” Daniels said. “Being with my teammates, getting that first win, I thought it was a good controlled game and coach Tee kept finding me completions that allowed me to get more comfortable.”

It stands to reason that things might not be so comfortable the next two weeks on the road against Stanford and Texas but those tests will come in due time. For now, the Trojans are 1-0 in the JT Daniels era and he showed enough in his debut to keep optimism high for USC fans.