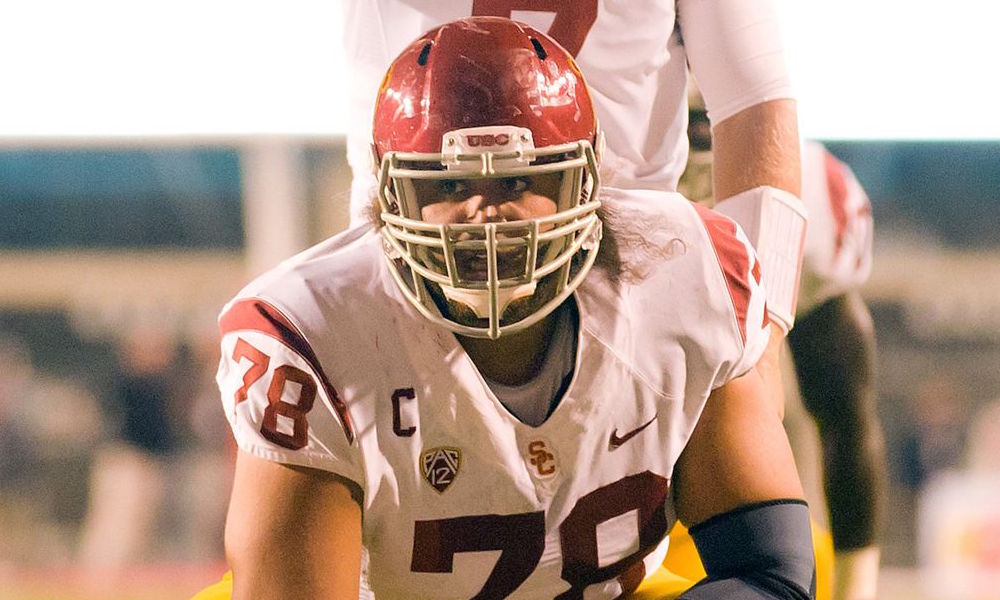 WeAreSC caught up with Khaled Holmes to get his thoughts on the ND game, the offensive line and his new business venture Talegate

1. You were in attendance last week at Notre Dame and saw the struggles of the USC o-line/run game. You’ve also talked about wanting to simplify things with the play calling. What are some of the specific things you would look to do on Saturday to help get things turned around? Play calls, personnel roles increased, etc.

Unfortunately, I was in attendance last week. It was certainly not the trip I had hoped it might be! My main recurring thought this season has been, how can we help Darnold play like the QB we saw last season? It never helps getting behind early in games, and we have made a habit of that. That leads to trying to force things, and trying to make up a multi-score deficit with one play. In terms of simplifying the pass game, we should try to really establish more of rhythm for Sam. 3 step drops, timing routes and “easy” completions can all help accomplish this.

More importantly, I would love to see an early game focus on trying to establish the run game. For instance, we started the game with a 3-and-out on defense – it would have been great to see a couple runs to start our first drive, for a number of reasons. Having young players on the offensive line, it is imperative to do everything you can to build their confidence. In my opinion, run blocking allows for that, especially in a hostile environment. In the run game, regardless of crowd noise and and the opponent, you have an opportunity to impose your will on the man across from you. Pass protection, simply by its nature, is more passive – and is certainly more difficult in an away setting.

Offensive line is a unique position group in sports, in that it requires five different people to act as one. If four of them succeed at this, and one fails, the whole group fails. What makes this even trickier, are injuries and inexperience (individually and collectively). As an offensive lineman, you must know that EVERYONE gets beat sometimes. It’s about the mental fortitude and ability to recover from bad plays that really separates guys. I struggled with that early in my career, so I know how difficult that truly is. Regardless of being beat in some 1 on 1 situations, I have liked the effort I have seen up front. At the end of the day, effort is the most important thing for the big guys – it can mask a lot of technical issues.

2. You experienced 2012 as a captain on that team. Many USC fans are viewing this ASU game as a key factor is whether the team rebounds or faces a November swoon. From a leadership perspective, what are some keys that you would look for as the team prepares for, and goes against the Sun Devils?

The best thing for the team to focus on is the fact that the Pac-12 Championship is still in reach! For how we have played up to this point, that is extremely uplifting. Even more important, however, is to not put too much pressure on each individual week coming up. It is positive to have more of a sense of urgency, but that can easily become a sense of emergency and panic. As a player, just keep training, practicing and studying like you know how, and as a coach do not try and reinvent the wheel.

3. You’re involved with the Talegate app, which has several former Trojan players active on the new site. Tell us about your plans and what you have in store for the future?

We just launched Talegate! It is a new social media platform for people who are passionate about college football! This includes fans, alumni, die-hards, high-school/youth athletes and, of course, former college football players! Myself and Keith Rivers are directly involved with the company at an executive level, but we have a bunch of former Trojans who are active on the app all the time. Guys like Matt Barkley, Dion Bailey, Antwuan Woods, Tony Burnett, Robert Woods and a lot more former USC guys.

Talegate is unique in that it is a mobile destination for the hyper focused community of USC football fans. We’re bringing fans closer than ever to players. Through exclusive content, dialogue and allowing former players to share true commentary on the game in a safe place. Everyone on Talegate can post images, text, video and GIFs and ask questions to fellow Trojan fans and players.

A great way to get involved on Talegate is to join us for Thursday Thoughts! Every Thursday we have fans and players ask and answer any and all questions pertaining to college football. It has driven pretty fun engagement so far, check it out today!

4. How can fans interact with you during the game on Saturday?

Every Saturday, hop on Talegate and join us for live game threads, hosted by different players all the time. As Trojans, we are all watching the game, so follow along on and ask questions about particular plays or anything that is related to the game! Us former players will definitely be adding our two cents!