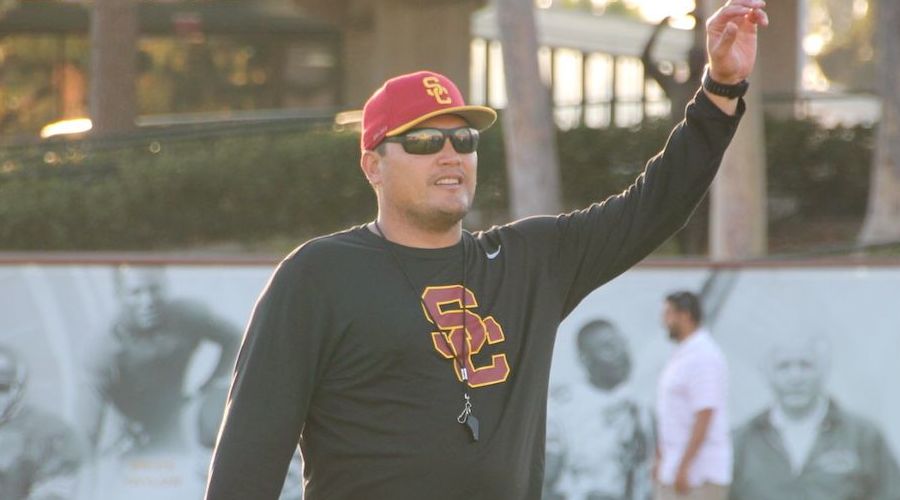 It’s been a flurry of activity surrounding USC football off-the-field in recent days with coaching changes and lawsuits dominating the news.

Newly promoted Trojans coach Clay Helton wasted little time after the end of the regular-season in making a round of coaching changes as he announced he would not be retaining Justin Wilcox (defensive coordinator), Chris Wilson (defensive line), Keith Hayward (defensive backs) or Bob Connelly (offensive line). The four coaches were dismissed immediately and will not coach the team in the Holiday Bowl against Wisconsin. Among the staffers who will fill in for the dismissed coaches in the bowl game are former USC players Kenechi Udeze (has been working on strength and conditioning staff, will work with DL) and Lenny Vandermade (had been an offensive assistant before working with tight ends after Steve Sarkisian departure).

It wasn’t a huge surprise to see Wilcox go as he had come under intense scrutiny, the only minor surprise was that it happened so quickly. One defensive coach who was retained is Peter Sirmon, who coaches linebackers and headed up the USC recruiting efforts over the last two seasons. On the offensive side of the ball, there was some improvement shown this year by the Trojans offensive line but apparently not enough to keep Connelly on board. And while it was pretty much expected to see Tee Martin (wide receivers) and Marques Tuiasosopo (quarterbacks) remain on the staff, it was a mild surprise to see Johnny Nansen stay as running backs coach, which indicates that Helton likes what he sees from the backs.

The big keys now for the staff will be to see how Helton fills things out. He has already said he will not call offensive plays next season, so his choice of offensive coordinator is critical. It stands to reason that Martin and Tuiasosopo will both get a look, and there are bound to be other candidates from outside the program. The defensive coordinator spot is huge as well, with many USC fans clamoring for well-known USC names such as Ed Oregon and Clancy Pendergast. Outside of the coordinators, how he fills the two line spots will be as important as any moves Helton makes. And will he hire a full-time special teams coach? Lots of answers to come in the next few weeks.

After recently completing treatment for alcohol-related issues, Sarkisian also wasted little time in creating a stir when he filed a lawsuit against USC on Monday claiming he was wrongfully terminated from his contract. Sarkisian is seeking at least $12.6 million in damages, and his attorney said that amount could end up closer to $30 million.

Sarkisian claims that USC “kicked him to the curb” when he sought treatment for his alcohol-related disability. The lawsuit paints a picture of a “highly successful” USC coach who had worked the entire time at USC with this disability, and when he finally came to grips with the fact that he needed help, he was treated with threats by USC athletic director Pat Haden and unexpectedly fired while he was on a plane to a treatment center.

The suit is, of course, Sarkisian’s version of the story, framed in a legal manner to help get the best possible financial result. And while you can question some of the decisions made by Haden in his handling of the situation after the Salute to Troy incident, it’s hard to read the suit without coming away feeling like Sarkisian is doing a good job of playing the victim. Don’t get me wrong, there is legitimate concern for his welfare as a person and any battles he was/is fighting. The USC message boards that were very harsh on Sarkisian in his final weeks as coach were flooded with well wishes and support as soon as he entered treatment in October. With his actions yesterday, however, those feeling of good-will dramatically changed and the support disappeared.

We certainly don’t know where this suit will go yet, although USC did issue a statement saying much of what was stated in the suit is patently false, and that the school will defend the claims vigorously. Stay tuned.

McNair case against NCAA gets another boost

A California appeals court ruled on an appeal by the NCAA to have former USC running back coach Todd McNair’s lawsuit against the NCAA thrown out. While the court did throw out some elements of his suit, it preserved McNair’s defamation claim, which means the case can proceed to trial, and said he “demonstrated a probability of prevailing at trial”.

The three-judge panel said that the NCAA Committee of Infractions report in the Reggie Bush case was “worded in disregard of the truth to enable the (NCAA committee) to arrive at a predetermined conclusion that USC employee McNair was aware of the NCAA violations”.

This version of the facts is, of course, what many USC fans have long believed to be the case.

The court noted that the NCAA needed to somehow tie-in a USC employee to knowledge of Bush’s alleged dealings with a would-be sports marketer in order to charge that the school was aware of illegal benefits. Two of the primary points raised by the court were that the NCAA never allowed McNair to counter specific claims which were outside of the record, and that they also allowed members outside the committee to influence their deliberations, which is against NCAA procedure. The court also said McNair had presented admissible evidence that, if accepted, could have indicated he did not know about the violations.

It remains to be seen where the case will end up as the NCAA still has other appeals options to consider, but the chances of McNair achieving some sort of monetary recourse from the NCAA are still very much in play.