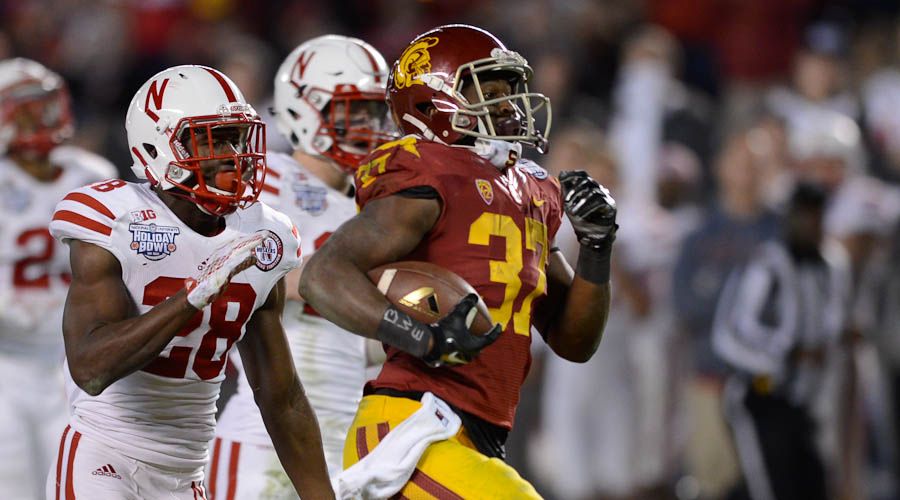 With the news that Buck Allen has declared for the NFL draft, the Trojans have lost the most productive running back the program has seen in the last decade.

“This was a tough decision for me,” Allen said in a statement released by the university. “I went home to Florida and talked it over with my family. I am proud to have been the first one in my family to have gone to college, and I’ve been blessed to say I played football in college. Now I’m ready to take it to the next level. Every kid dreams of this moment.”

Allen came to USC from Florida, the product of a state champion Tallahassee Lincoln team that also sent defensive backs T.J. Bryant and Jawanza Starling to USC around the same time. There were some academic issues that delayed his arrival, which meant a redshirt year on the service team while adjusting to college life far from home.

There wasn’t much action in his redshirt freshman year, six carries for 32 yards, and not a lot of anticipation for what would be expected for him in the 2013 season with a backfield that included Silas Redd and Tre Madden.

During the 2013 spring ball sessions, however, there was a change that began to show with Allen’s running style. He was becoming more assertive, a hard running slasher with the ability to break a big run with his surprising speed and some very good hands as a receiver. He was still buried on the depth chart as the regular season rolled around – there were also a pair of true freshmen in the tailback rotation in Justin Davis and Ty Isaac – but Allen wasted no time in making his presence known when he got some late action in the opener against Hawaii by running over a defender near the goal line.

The Trojans struggled early in the season, with Allen only getting 10 carries over the next four games, and Lane Kiffin was removed as head coach and replaced by Ed Orgeron. One of the first things Orgeron did was bring Marcus Allen in to speak to the team and during the course of that speech, the 1981 Heisman winner asked the crowd of players, “where is Buck Allen?”. The shy sophomore was taken aback by the fact that someone like Marcus Allen knew his name, but then it was taken a step further when Marcus said “keep doing what you’re doing. You’re opportunity is going to come.”

There was also a newfound faith in Allen from Orgeron and running backs coach Tommie Robinson, who had watched his work on the practice field, and Allen finally got his chance to shine against Oregon State in week seven with 16 carries for 133 yards and three touchdowns. There were three more 100-yard games before the season was over, and by the time new coach Steve Sarkisian arrived he found Allen firmly established as one of the bright stars of the team heading toward the 2014 season.

The off-season also showed a new leadership role for Allen, who was more vocal and who bulked up in preparation for a lead back role. Allen knew that Sarkisian had traditionally relied on a lead back during his coaching career and those backs had usually put up big numbers.

When the season rolled around Allen picked right up where he had left off the year before by putting up 100-yard totals in eight of the first nine games of the year. He ended the year with 1,489 rushing yards with 11 touchdowns and caught 41 balls for 458 yards. His stretch of six straight 100-yard rushing games was the first time that feat had been accomplished at USC since Marcus Allen had 11 straight in 1981, and he put up 100-yards or more in 13 of the last 19 USC games. Buck was named first team All-Pac 12 at running back after leading the conference in all-purpose yardage with 149.8 yards per game (he was the only player in the nation with 13 games of 100-yards or more from scrimmage).

“Buck is a true Trojan and we wish him well,” Sarkisian said. “He is not only a good football player, but a fine young man. We are grateful for what he did at USC. We asked a lot of Buck this year and he came through with an All-Pac-12 season. We know he can do more of the same in the NFL.”

There is little doubt that if Buck had decided to return for his senior year that he would have been set up for a potential 2,000 yard rushing season and every national award imaginable, but there is also no doubt that this move makes sense for Buck. His abilities as a running back with versatile skills are well known to the NFL scouts and there isn’t likely to be much change in that area if he had come back for another year. He should be a solid pick, maybe not a first or second rounder, but he will have a home in the league next year, and he is also close enough to his degree that he should be able to finish that up in a quick amount of time. Let his career serve as a good example of someone who came to school, got through the tough early struggles, worked hard and was eventually rewarded on and off the field.

“This has been a long journey,” Allen said. “There are so many I want to thank, starting with God, who made this all possible.  I want to thank President Nikias for the opportunity I had at this great university and all of those who impacted my life at USC, including all our fans.  I want to thank Pat Haden and J.K. McKay for accepting me and always being there for me.  I want to thank Coach O for trusting in me when he took over last year and Coach Tommie Robinson for putting his job on the line last year by giving me the chance to play.  And now Coach Sark and his staff for molding me as a man and as a complete person on and off the field.  I had a great year with Coach Sark and his staff.  I also appreciate all the help I got from our equipment and training staffs, who met all my needs.  And especially everyone in our Academic Services department, who did such a great job supporting me and making my experience at USC better every day.  Fight On!”