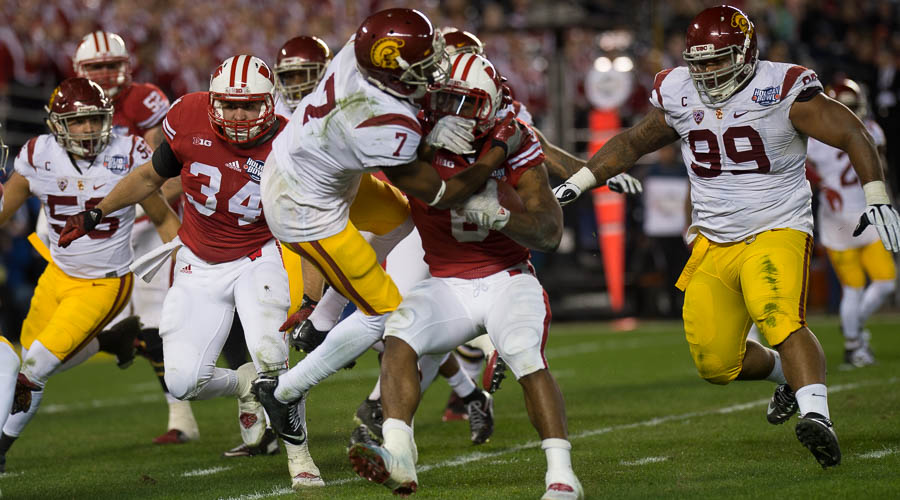 Spring ball is annually a time for many players to step up and show the coaches that they are ready for bigger roles. There are obviously more than 7 players who will be worthy of mention but here are my top 7 candidates for breakout players of Spring Ball 2016.

It will be a high-profile position battle between Max and Sam Darnold but, with all due respect to Sam, I think this is going to be a case where Browne reminds everybody why he was a former #1-ranked QB at the high school level. Max has done everything the program could have asked as he waited his turn for three years, never complained about his situation and steadily did the work necessary to prepare for when his shot eventually came, which is now. It reminds me a lot of when Mark Sanchez had to wait three years, and he came out firing when it was finally his turn. I expect a similar performance from Max this spring.

It was a blow for the Trojans last year when the top two projected tight ends on the depth chart (Dixon and Cope-Fitzpatrick) became unavailable, and we ended up having to rely on two players (McNamara and Petite) who were new to the program when fall camp began. All things considered they got decent production but I expect the role of the tight end to really increase this year as the pair has more experience, particularly with Petite and his ability as a pass catching weapon. Tyler should really have an opportunity to bulk up in his first off-season in a college weight program and that will be a huge benefit to his game as well.

Brown started to get a lot of playing time in the rotation at both guard spots last year and he’s progressed to the point where he can be a dependable option as needed. I don’t know that he’s going to push either Damien Mama or Viane Talamaivao out of a starting role but with a new position coach comes the opportunity for a clean slate and it wouldn’t surprise me at all if Brown comes out of spring as a third potential starter at guard.

The Trojans will need multiple players to step up along the interior of the defensive line and nobody looked more ready in bowl practices than Green. It’s somewhat remarkable that he was able to contribute as much as he did last year considering he was coming off a knee injury suffered late in his senior year, and that means he should be even more healthy and ready to go in spring drills. The guess here is that he will be in one of the defensive end spots, similar to the one Leonard Williams played under Pendergast in 2013 when he had 13.5 tackles for loss and 6 sacks.

It’s easy to imagine Gustin having a similar type of impact in the Pendergast defense that we saw from Morgan Breslin and J.R. Tavai. Porter had a solid freshman season but I think most Trojan fans think the best is yet to come, and we could start to see that this spring. There will be competition at the spot but Gustin brings the kind of physical skills and aggressive style of play that could stand out, plus he also has a good relationship with new position coach Kenechi Udeze.

There are two reasons why Langley makes this list. The first is that he’s going to get an extended look in spring with Adoree’ Jackson taking part in track & field. Iman Marshall returns as one corner starter but Langley and Jonathan Lockett should get a ton of work as well. The second reason is that Langley is one of the players who should benefit the most with the strength and conditioning program. He’s a pretty slight guy who probably should have redshirted last year to add bulk but we should start to see that increased size now to go along with the experience he gained by playing.

Tell (photo above) was on his way to a terrific freshman season before injuries slowed him a bit. He’s healthy now and there is a buzz about his ability to become the next big-time safety for the Trojans. He’ll get a long look with Chris Hawkins sitting out spring due to injury, with John Plattenburg, Leon McQuay and Ykili Ross also in that mix.