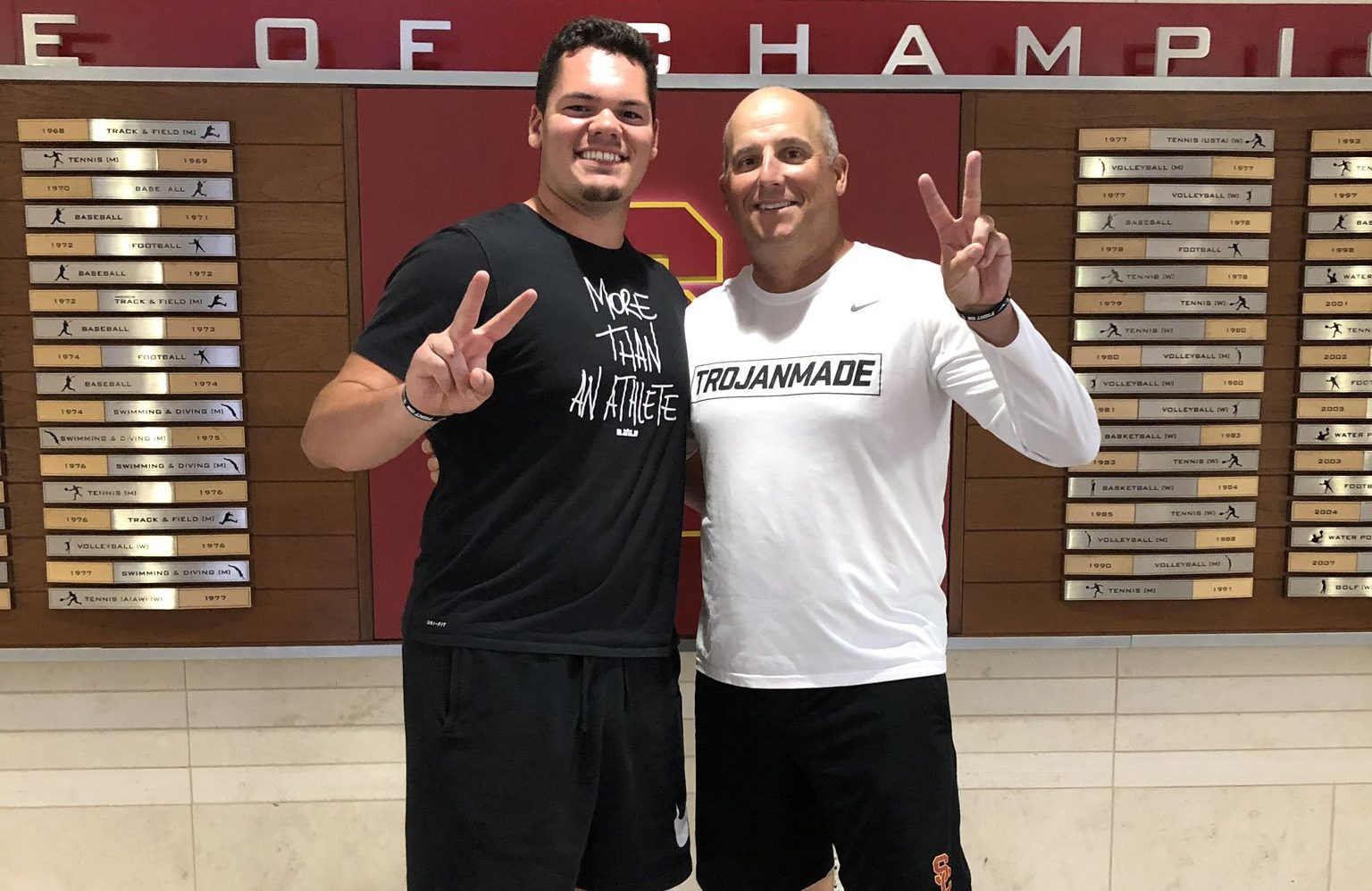 While USC’s poor final ranking with its 2020 recruiting class is going to be mentioned over and over when juxtaposing it with the success the Trojans are having on the trail in the 2021 class, Clay Helton and Tim Drevno did load up on offensive linemen in last year’s class. Six offensive big men will make their way into the USC program this fall, and Drevno is looking forward working with all of them.

“I’m really excited about all six of them,” Drevno said. “They all have height. They all can play guard or tackle and they’re all versatile. When you’re throwing the ball, you want guys to have arm length so they can get separation off the defender. Sometimes with short-arm guys, you have a tougher time with wider rushers because he can get his hands on you before you get your hands on him.”

One of USC’s two four-star recruits came in the form of offensive lineman Jonah Monheim. The 6-foot-5, 290-pound Monheim seems to have all the tools necessary to potentially play early in his career.

“He’s really athletic,” Drevno said of Monheim. “He could probably play all five positions. I’m excited about him. He’s really smart and has tremendous recall. That really stands out. He remembers what you taught him the day before. You want smart offensive lineman, where the screen doesn’t go fuzzy.”

Courtland Ford was one of two linemen USC signed from the state of Texas, and the 6-foot-5, 305-pound Ford is a former LSU commitment.

“Every time I reach out to him he’s always working out,” Drevno said. “He’s a big body with a good lower body.”

The second Texas offensive lineman signed by USC was Casey Collier, a 6-foot-7, 290-pound tackle. Collier’s older sister, Charli Collier, plays basketball at Texas, where she was a First-Team All-Big 12 Conference selection this past spring.

“He’s a long-limbed, 6-foot-7 kid,” Drevno said. “He’s also always working out and he’s good with football awareness. His sister plays basketball at Texas and you can see that lineage of athleticism, the mindset, the competitiveness, the drive. You can totally see that with him.”

The Trojans went into Washington to grab a commitment from 6-foot-5, 285-pound Caadyn Stephen (feature photo).

“He was in Alaska for the first two years of his high school,” Drevno said. “He’s an athletic kid. He’s really raw but the ceiling is very high for him. He’s just at the start of football. He can really bend and has good feet. I’m excited about developing the heck out of that kid.”

Arizona’s Andrew Milek committed to USC in June, following a camp with the Trojan coaches.

“He’s a talented guy and a smart kid,” Drevno said of the 6-foot-5, 290-pound Milek. “He’s very conscientious, from nutrition to workouts to asking football questions. That’s really going to help him with his game.”

And finally, Andres Dewerk is a 6-foot-7, 290-pound lineman from Northern California.

USC shouldn’t have a great need for any true freshman to grab a starting spot this season. Whenever the Trojans are able to get back onto the field, it’s likely they’ll utilize a starting offensive line that features Alijah Vera-Tucker at left tackle, Justin Dedich at left guard, Brett Neilon at center, and then a combination of Liam Jimmons, Andrew Vorhees, Jalen McKenzie and Jason Rodriguez on the right side. With guys such as Frank Martin, Liam Douglass and Geno Quinones, the two-deep is full at this point.

But these freshmen likely won’t be satisfied staying as the third option across the board and there is enough talent here for at least one or two to start pushing up the depth chart.

Because of the versatility they all bring, and the fact that Drevno wasn’t able to take steps forward in terms of getting a better idea of what a post-spring depth chart looks like and which returning players were settling into which positions, there are still some challenges in terms of deciding where these newcomers will initially line up when they can finally take the field.

“I’ll have to sit down and think through it,” Drevno said. “I want to give them the best opportunity. They’re going to get a lot of reps, so we’ll evaluate and see if any of them are ready to play as true freshmen.”

After signing just four total offensive linemen in the 2018 and 2019 classes, this group will likely represent a bulk of the offensive line depth chart in the coming years. So while they may not be in line to make an immediate impact this fall, how they develop this season could play a huge role in the success of this offense and the program for several years down the road.