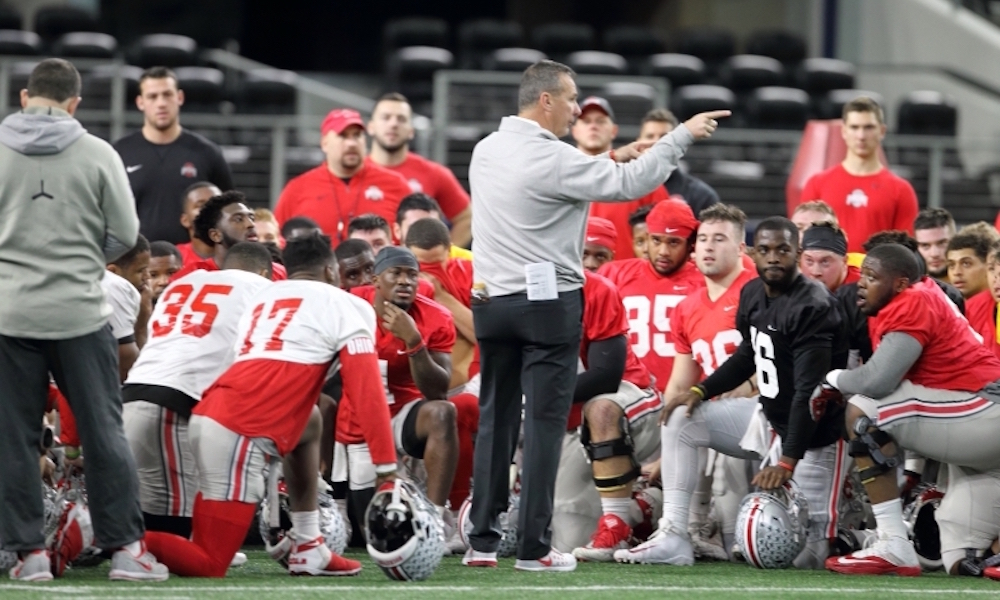 Breaking Down the Ohio State Buckeyes

Champions of the Big Ten (36th time). The Buckeyes are the only team in the nation to rank in the top 10 for total offense and total defense. They have won 11 games or more in six straight seasons.

The Buckeyes are the only offense in the nation to rush and pass for over 3,000 yards this season. They rank #6 in total offense at 523.6 yards per game, and are #5 in scoring at 42.5 points per game. They also rank #5 in the nation on 3rd down conversions with a 48% success rate.

“JT is very patient. He knows exactly what he’s doing. He’s one of the best I’ve seen” – Chris Hawkins

Averaging 250 rush yards per game and 5.9 yards per carry. J.K. Dobbins freshman record 1,364 rushing yards, averaging 7.5 yards per carry. Only 4th OSU freshman to go over 1,000, the third was last year with Mike Weber (hurt hamstring at start of year and missed four games, couldn’t regain his starting job once Dobbins got in there). Dobbins ran for 174 yards in Big Ten title game to become first ever freshman game MVP. Team ran for 238 vs Wisconsin #1 rush defense and 335 vs Michigan State #3 rush defense. Weber had 608 yards on 96 rushes (6.3 per) and 10 touchdowns.

“J.K. Dobbins is the key to their offense right now. Their offensive line works so well together. They’re going to come out and jump out and run the ball against us. And our most important thing is to stop the run.” – Cameron Smith

Very good and six-deep group, tall receivers, fast receivers. Good for big chunks of yardage, and that could be key to the game, because USC will want to do the same thing. Terry McLaurin and Parris Campbell are captains. McLaurin has 8 catches of 20 yards or more this year, K.J. Hill had six (Hill leads team with 55 catches).

“Every single guy they put in there is either fast or tall, and there’s only one tall one. So they’re very fast, just the fastest group of receivers that I’ve seen in my career.” – Hawkins

3 All-Big-Ten first teamers. Experienced (145 starts between them). Billy Price is the Rimington Award winner at center and unanimous All-American, has started a school record 54 straight games. Four of the five starters have been together the last two years as a unit, 26 straight games.

“It’s easy to be mesmerized by their talent at quarterback, their running backs are stellar, great vertical wide receivers, but the key to the whole offense is the experienced and talented offensive line. We haven’t seen these kind of blocking schemes from a line that is this experienced and plays with a nasty streak.” – Kevin Bruce

The Buckeyes rank in the top 10 in both total defense (292 yards per game) and rush defense (108 yards per game), and have not allowed a team to rush for 100 yards in 6 of their last 8 games (Ronald Jones rushed for over 100 yards in each of the last 5 games). They are also ranked #6 in the nation in tackles for loss.

This is the unit that stands out on their defense for their depth (up to 10 guys in rotation), experience (120 career starts among them) and talent (multiple all-Big-Ten performers). The top stat guy is All-American Nick Bosa with 7 sacks and 14.5 tackles for loss but Tyquan Lewis and Hubbard are other big-time guys. They do a good job of setting the edge well and forcing the action inside between the tackles.

Solid if not spectacular group. Jerome Baker leads the team in tackles while Worley is a team captain who has seen time at all three backer spots this year. If there is an area of the defense to attack this could be it with intermediate throws and passes out of backfield, play action, and the tight end. Baker Mayfield had a lot of success in this area.

CB Denzel Ward is a first-year starter who was named a Consensus All-American. Safety Damon Webb is a two-year starter who leads the team with four picks, while Jordan Fuller is an Academic All-American. They like to play their outside corners in man on the opposing receivers so it will be interesting to see how the talented USC receivers handle that in terms of getting separation off the line.

Urban Meyer is a veteran championship coach (3 national titles, 176-31 overall record in 16 years) and he has a veteran staff with him.

“You hear the term big man on big man a lot but I also look at big coaches and big schemes. They’ve got Greg Schiano coaching defense, a very successful head coach in college at Rutgers, coached in the NFL as a head coach and probably should be the head coach at Tennessee right now, and then Kevin Wilson on the offensive side who has been a head coach in college as well. Urban gets really good coaches in there and he has the confidence to let them coach, and you can tell they are coached well. They communicate well, they are rarely out of position and it translates into the success that they’ve had.” – John Mazur