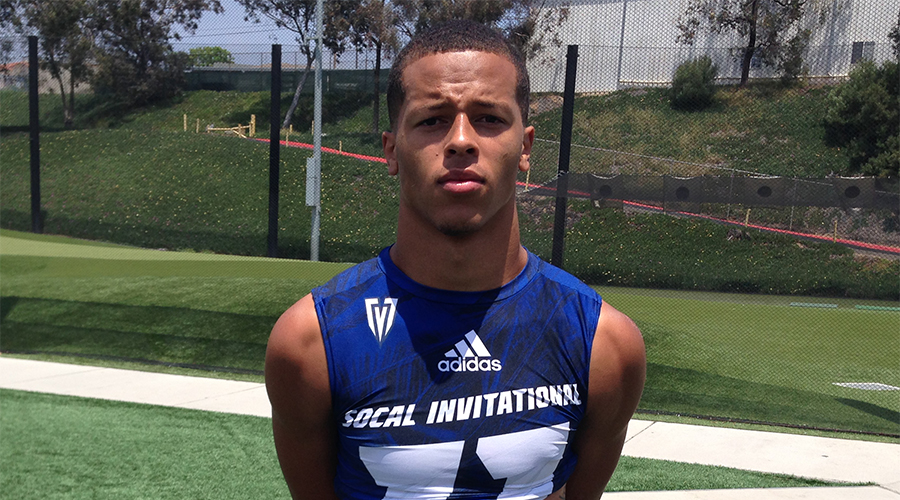 A frequent visitor to the Los Angeles area this offseason, Class of 2017 safety prospect and USC commit Bubba Bolden was back in town this past Saturday to participate in the Adidas SoCal Invitational 7-on-7 tournament in Redondo Beach.

Part of a team that was stacked with wall-to-wall talent from a number of Las Vegas high schools, the Bishop Gorman star made a huge impact with his play in the secondary as well as at wide receiver.

But it wasn’t just Bolden’s performance on the field that had everyone in attendance talking, but also word of a change in the strength of his commitment that had leaked out in recent days.

Having verballed to the Trojans this past December, Bolden – who took in no less than four spring practice sessions at USC this spring – seemed to be as solid a pledge as there could be at one time. On Saturday, however, he confirmed that while he still considers himself a Trojans commit, it’s definitely on the softer side these days.

“I don’t know really how to describe it,” Bolden said. “I’m committed to SC, and it’s always been a dream school for me, but I’m still open to other schools. I’m still going to take my official visits and see how things go.”

The reason for Bolden’s wavering stems, in short, from a general lack of communication between himself and USC – particularly assistant Ronnie Bradford, who was hired on as the Trojans’ defensive backs coach this past January.

“He actually sent me a message two days ago,” Bolden said. “That was the first time that I heard from him since the spring game (April 16).”

While he hasn’t been in frequent contact with Bradford, Bolden did note that he has formed a solid relationship with USC head coach Clay Helton and linebackers coach Johnny Nansen – the two Trojans coaches that he’s heard from most often throughout the process. On top of that, USC quarterback coach Tyson Helton and defensive coordinator Clancy Pendergast have been on campus at Bishop Gorman this spring, with Pendergast stopping by just last Thursday – assuring Bolden afterwards that he is still a part of their future plans.

Still, Bolden makes no secret of the fact that in order for him to be completely comfortable with a school, he needs to have an extremely strong relationship with his future position coach – which at USC is Bradford.

“It’s really important,” Bolden said. “You know, I need to have that close, tight relationship with the DB coach, just to know how he feels about me, and how I’m going to feel about him. It’s a big thing.”

With Bolden having planned to take all five of his official visits since the beginning of his recruitment, with the softening of his pledge, he has started to zero in on a few of the other potential contenders for his signature in recent weeks.

“I’m checking out Colorado soon…UCLA and ASU,” Bolden said. “Those are the main three right now. I think I’m also going to make my way down to Tennessee to check them out.”

But while the door has been opened up a bit for some other programs to step in, Bolden maintains that USC – the program that he grew up rooting for – still has a very good chance of keeping him in the fold.