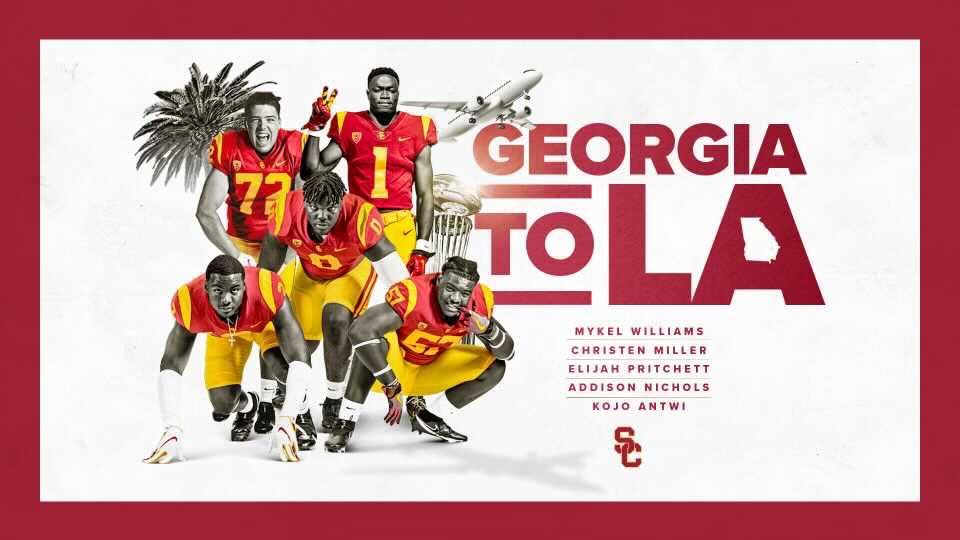 USC will host its final official visit weekend of the June recruiting period over the next few days, with eight prospects scheduled to attend.

The weekend got off to an early start, with four-star wide receiver Isaiah Sategna (Fayetteville, Ark./Fayetteville) landing in Los Angeles on Thursday.

Happy birthday coach! Glad I got to spend some of it with you @USCCoachHelton pic.twitter.com/N0uSSRIouN

The 5-foot-11, 170-pound receiver is a track standout as well and brings some true speed and athleticism to the football field. His father is an assistant track coach at Arkansas and his mother was an Olympic sprinter. Sategna made a commitment to Texas A&M back in March and then officially visited the Aggies in early June, but he announced his decommitment two weeks later and is now looking hard at other programs. There’s a growing feeling that Oregon could be tough to beat, given its success in both football and track, but USC can make a solid claim there as well.

Joining him in a Thursday arrival was defensive end/outside linebacker D.J. Wesolak (Boonville, Mo./Boonville). The 6-foot-4, 240-pound prospect is the nation’s No. 178 overall recruit and has formed a very solid relationship with USC defensive line coach Vic So’oto and quality control analyst C.J. Ah You. He’s set on leaving home for college, but it’ll be up to the USC coaches to convince him to head west across the country instead of east. Clemson is seen as the frontrunner at this point and that’s a tough recruiting battle to win for an edge defender right now.

Georgia will again be well-represented on the USC campus this weekend. The Trojans have already made a splash in the state by landing a commitment from five-star defensive end Mykel Williams (Columbus, Ga./Hardaway) and doing well with four-star defensive lineman Christen Miller (Ellenwood, Ga./Cedar Grove) and four-star offensive tackle Elijah Pritchett (Columbus, Ga./Carver). This weekend, USC will host four-star wide receiver Kojo Antwi (Suwanee, Ga./Lambert) and four-star offensive lineman Addison Nichols (Norcross, Ga./Greater Atlanta Christian). Antwi is the nation’s No. 115 overall prospect, while Nichols checks in at No. 103 and the No. 3 interior lineman.

Antwi is down to Georgia, Ohio State, Texas A&M and USC, and is looking at a commitment date of July 5. The 6-foot-1, 185-pound receiver has the ability to compete right away at the next level and is a guy USC has targeted for quite a while in this class. The same goes for Nichols on the offensive line, who has been a priority target for USC. He is capping a very busy month of June. This will be his final official visit of the month after already seeing Florida, Georgia, Ohio State and Tennessee.

USC’s other four visitors this weekend are closer to home.

Running back Raleek Brown (Santa Ana, Calif./Mater Dei) is still committed to Oklahoma, but USC is putting a push together and there could be some momentum for the Trojans here. The five-star back has already visited the USC campus unofficially and is scheduled to be back for an official this weekend. Oklahoma recently grabbed a commitment from fellow five-star running back Gavin Sawchuk (Littleton, Colo./Valor Christian), which would give the Sooners a phenomenal 1-2 punch at the position in this class. USC’s running back position has gone through some recent changes, with incoming transfers Keaontay Ingram and Darwin Barlow and a commitment from 2022 three-star prospect De’Anthony Gatson (Newton, Tex./Newton). But Brown is a must-get offensive weapon who can work well in any offense, but especially one that can get him in space and let him work in the running or passing game.

The Trojans will host their top safety target in the 2022 class, in four-star Zion Branch (Las Vegas/Bishop Gorman). The 6-foot-2, 190-pound standout is the nation’s No. 49 overall prospect and No. 4 safety, and this is an extremely important visit for the Trojans. It looked like USC was in the driver’s seat in this recruitment for a long time, but Branch visited Ohio State in early June and the Buckeyes seemed to grab a ton of momentum. He was at Oklahoma this past weekend, so now the Trojans will have an opportunity to make an impression. He’s also set fall official visits to Alabama and Clemson.

USC hasn’t hosted a ton of offensive linemen on official visits during June, and it’s clear the ones visiting campus are some of the top targets there. One guy who fits that description is four-star guard Dave Iuli (Puyallup, Wash./Puyallup). The 6-foot-5, 315-pound guard is the nation’s No. 194 overall prospect and a major target for a number of Pac-12 and national programs, including Cal, Oklahoma, Oregon, Oregon State and Washington. He’s visited Cal, Oregon and Oregon State this month and now will trip to USC. The Trojans need to sign a handful of talented offensive linemen in this class and Washington is home to several major targets, in Iuli as well as five-star tackle Josh Conerly Jr. (Seattle/Rainier Beach) and recent offer Mark Nabou (Seattle/O’Dea).

And the Trojans this weekend will welcome home four-star tight end Keyan Burnett (Anaheim, Calif./Servite), who committed to USC back in March but took an official visit out to Arizona with teammate and Wildcat commit Noah Fifita earlier this month. Burnett is a major weapon at the tight end position and capable as a receiver and a blocker. He’s also teammates with major USC target, wide receiver Tetairoa McMillan, who was also on that Arizona visit and took an official to Oregon this past weekend. McMillan, a four-star prospect and the nation’s No. 67 overall recruit, is expected to make a summer decision and took an unofficial visit to USC earlier this month.