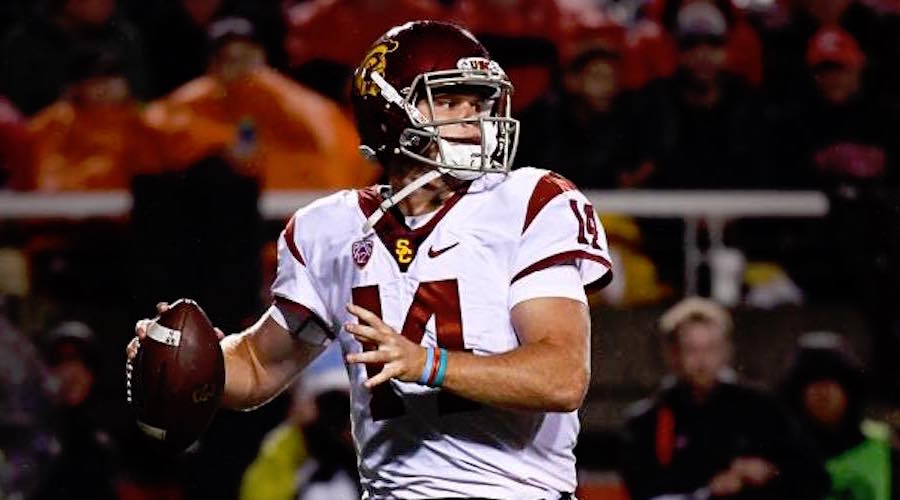 When spring camp at USC opens up on Tuesday, there are a whole host of storylines that are sure to be at the forefront of everyone’s thoughts. Who will emerge at both of the offensive tackle spots? What wide receivers will step in to take the place of JuJu Smith-Schuster and Darreus Rogers? Does Jack Jones have what it takes to fill the shoes of Adoree’ Jackson at cornerback?

Sure to draw the most focus of all, however, and by a long shot, is a single player – redshirt-sophomore quarterback Sam Darnold.

Following a lights-out 2016 campaign that was capped off by a phenomenal outing in the Rose Bowl in which he threw for 453 yards and five touchdowns, leading USC to a 52-49 victory over Penn State, he is the Trojans’ secret weapon no longer.

For evidence, look no further than at the way that he’s shot up Bovada’s Heisman Trophy line in recent months. Starting out as the No. 4 choice at 9-1 to open the year, he’s now the 3-1 favorite to win the prestigious award – ahead of other big time stars like Lamar Jackson, the 2016 winner, as well as Alabama’s Bo Scarbrough.

Even more striking, however, is the amount of buzz that he’s creating in NFL circles these days, despite the fact that he isn’t even draft eligible until 2018.

At the recent NFL combine, in fact, NFL Network analyst Daniel Jeremiah announced it loud and clear via his Twitter account – NFL teams can’t wait to get a crack at landing Darnold.

The exact Tweet in reference read, ‘Text from NFL exec—biggest talk at Combine, and it’s not close – USC QB is rare. (It’s tough to ignore him when you’re studying other guys).’

Of course, you can’t blame them. As noted by Jeremiah, Darnold, who last season completed 67 percent of his passes for 3,086 yards and 31 touchdowns with nine interceptions, is a uniquely special talent.

At 6-foot-4 and 225 pounds, Darnold has the idea physical build to go along with a rocket for an arm, a quick release, outstanding pocket presence and excellent mobility. He is quite simply the total package at the position.

Still, praise at this level hasn’t been heaped upon a Trojans quarterback since the days of Matt Leinart, Mark Sanchez and Matt Barkley. Is Darnold up for the challenge of meeting those expectations?

Additionally, is he prepared to take on the leadership role in the locker room that comes with being the undeniable face of the program, not to mention the increased media attention that comes with it. If you’ll remember over the latter stages of Leinart’s career at USC, for example, he was elevated to near-rock star status in that regard. Is Darnold up for that?

The simple answer: yes, there is reason to believe that he’s more than up for all of it.

After all, more than his physical attributes, what has really captivated everyone who has ever seen him in action, even back to his high school days at San Clemente, is his cool and calm demeanor, both on the field and off. Nothing seems to phase him, no matter the situation. That’s something that he continually showed throughout last season, never more so than in the Rose Bowl when he completed 10-of-10 passes in the fourth quarter, when it must have seemed like all of the pressure in the world was placed on his shoulders.

And the scary thing is – at least for USC’s future opponents – the possibility exists that Darnold is still only going to get better. Top-notch quarterbacks don’t typically peak out with just 10 college starts under their belt. Throw in the outstanding work ethic that he possesses, on top of the fact that he continually showed improvement throughout last season, and it seems likely that we haven’t seen the best of Darnold just yet.

And with spring practice just one day away now, it won’t be long before everyone starts to find out for sure.