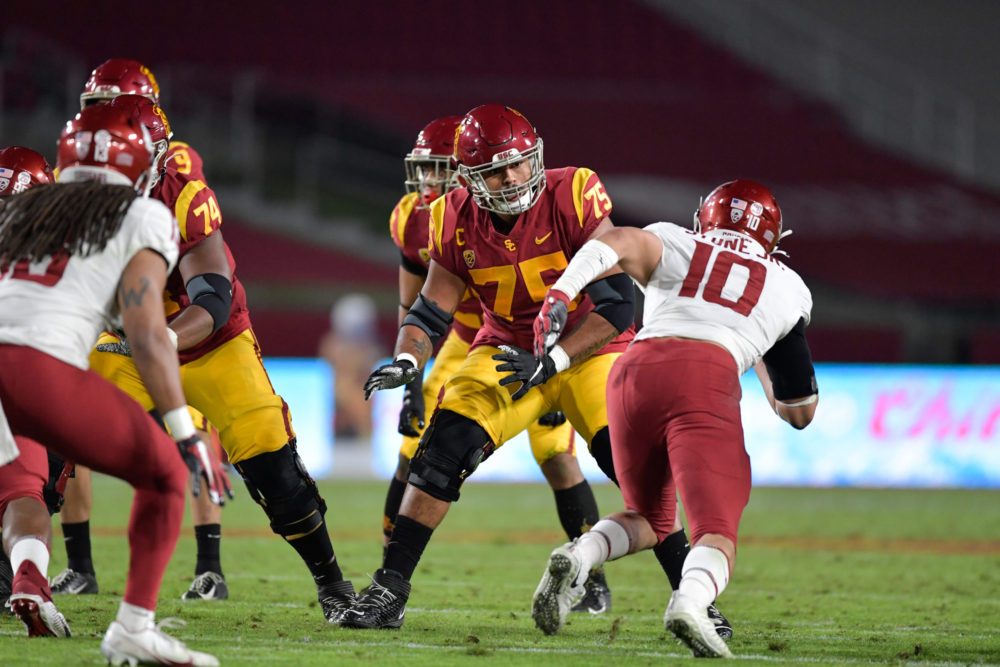 The first of USC’s early departures announced his intentions on Monday, as offensive tackle Alijah Vera-Tucker will forgo his remaining eligibility at USC and made himself eligible for the 2021 NFL Draft.

Vera-Tucker initially opted out of the 2020 college football season when it appeared the Pac-12 would postpone until January. When the conference eventually put together the fall season, Vera-Tucker’s return to the team was massive, as he filled a huge hole at left tackle and was the team’s best offensive lineman over the six-game season.

Vera-Tucker is a potential first-round draft choice in this coming draft, as the 6-foot-4, 315-pound lineman finished the 2019 season as one of college football’s best offensive guards, and has now shown that he has some positional versatility as a tackle as well. He was selected as a First-Team All-Pac-12 performer this season and was one of the conference’s highest-graded offensive linemen.

Just as it did when he initially opted out of the 2020 season, his departure again leads a gaping hole at left tackle, where the Trojans will need to find an answer for the 2021 season. True freshman Casey Collier was listed behind Vera-Tucker on the depth chart, but it will be interesting to see if fellow true freshmen Courtland Ford and Jonah Monheim, or now-veteran Jason Rodriguez, get opportunities at that spot.

Vera-Tucker is the first of several Trojans with decisions to make regarding early entry into the 2021 draft. Wide receiver Amon-Ra St. Brown, safety Talanoa Hufanga and defensive tackle Marlon Tuipulotu are a few of the players with multiple years of eligibility remaining who will have decisions to make. All seniors have the ability to return to USC next season as well, though players such as wide receiver Tyler Vaughns and running backs Stephen Carr and Vavae Malepeai could elect not to return and make themselves available for the draft.