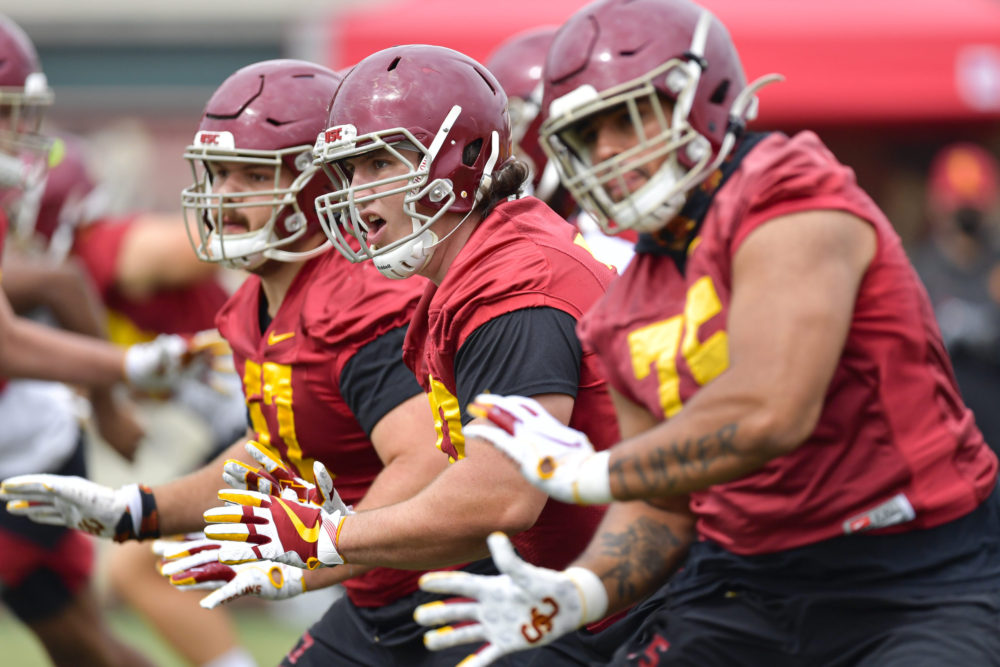 It was a fairly significant blow to USC, which was among Nichols’ final five (North Carolina was not) and was pursuing the four-star prospect heavily. Nichols, the nation’s No. 103 overall prospect and No. 3 interior offensive lineman, took an official visit to USC in late-June and was one of several Georgia prospect USC is chasing. Nichols showed early interest in USC and the Trojans returned that interest, making Nichols one of several Peach State prospects high on the board for USC.

It’s another disappointing chapter when it comes to offensive line recruiting for USC, but it’s not the end of the story for the Trojans in this class. Reaching across the country for a national prospect who has plenty of options closer to home isn’t an easy thing, but the Trojans proved they could do it in grabbing a commitment from five-star defensive end Mykel Williams (Columbus, Ga./Hardaway). USC will keeps its offensive line attention out there as well, with four-star tackle Elijah Pritchett (Columbus, Ga./Carver) still serving as a major Trojan target.

USC does hold a commitment from one offensive linemen in 2022, three-star tackle Keith Olson (Napavine, Wash./Napavine)

It’s an interesting situation for USC, which is one of just two programs to send offensive linemen to the NFL as first-round picks in each of the past two drafts. That success should speak volumes to recruits, but the lack of dominant play as a group combined with the fact that elite offensive linemen simply aren’t an abundant commodity in California or the West region is making grabbing national prospects at the position difficult.

Still, the Trojans are in the mix for some elite prospects, including five-star tackle Josh Conerly Jr. (Seattle/Rainier Beach) and five-star guard Devon Campbell (Arlington, Tex./Bowie). Locally, four-star lineman Earnest Greene (Bellflower, Calif./St. John Bosco) ranks pretty close to a must-get recruit, but Ohio State, Oklahoma and Texas are out-of-state programs that have made strong impressions. Greene appears to be the lone California offensive line prospect being seriously chased by the Trojans are this point.

Campbell and Pritchett took June official visits to USC, while Conerly was on campus as an unofficial visitor. USC also hosted four-star lineman Neto Umeozulu (Allen, Tex./Allen), the nation’s No. 158 prospect, in June. Targets like that, who show significant interest in USC, rise higher on the list of priorities with every target who commits elsewhere (though the Trojans can and will likely still chase prospects committed other places). The Trojans also hosted four-star guard Dave Iuli (Puyallup, Wash./Puyallup) on an official visit in June, though Oregon looks like it could be a major factor in his recruitment. USC extended an offer to three-star lineman Mark Nabou (Seattle/O’Dea) in June, as a prospect who could play on either side of the line.

Three-star guard George Maile (South Jordan, Utah/Bingham) looked like a good bet to wind up in this USC class early on, but he made a commitment to Baylor following a June official visit. The Trojans held an early commitment from three-star center Dylan Lopez (Bradenton, Fla./IMG) but the sides split and now Lopez is committed to Oregon State. Three-star guard Parker Brailsford (Scottsdale, Ariz./Saguaro) and Vega Ioane (Graham, Wash./Graham-Kapowsin) held early offers from USC in this class but are now both committed to Washington. The Trojans also extended an early offer to three-star tackle Kenji Swanson (Chatsworth, Calif./Sierra Canyon), who made a recent commitment to Stanford. Teammate Michael Wooten, who was not offered by USC, is committed to Oregon. USC also saw three-star tackle target Austin Kawecki (Frisco, Tex./Lebanon Trail) commit to Oklahoma State.

With very little spring film on many West region offensive linemen in the 2022 class, it will be interesting to see how the position develops over the next few months and especially after three or four games this fall. It wouldn’t be surprising to see a few new targets jump up on recruiting boards across the country, including USC’s. There also isn’t any denying that USC’s performance up front this fall could have a major impact on recruits and their interest in the Trojans. New position coach Clay McGuire will have an opportunity show what kind of impact he can have on the USC offensive line and the Trojans offense. With recruiting in a dead period during spring ball, he also should have an opportunity to host recruits on visits during fall camp and the season.

USC has signed nine offensive linemen in the 2020 and 2021 classes, but just one of those was rated as a four-star prospect and none were ranked among the top 350 prospects in his recruiting class.