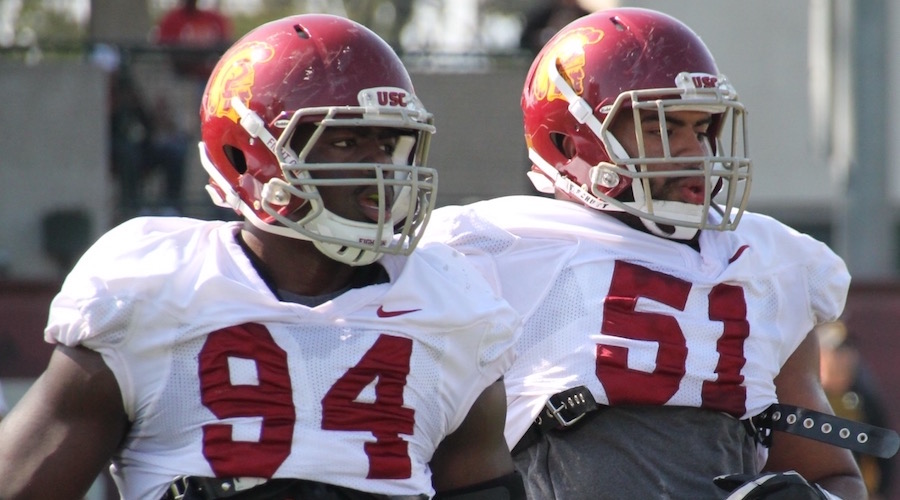 In this edition of the mailbag we discuss the defense against various Pac-12 offenses, NFL draft perception of the Trojans, the buzz over new arrivals at Long Beach Poly and more:

Do we goto a heavier front vs stanford or we do we stick with the 3 linemen and/or nickle combination? Would love to see the reverse-jumbo aka go heavy on the Stanford line with athletic twitchy DLs we just procured.

I love the direction of our interior DL bulk, which should in turn be able to match up well against the power run teams. When you looked out there in spring and saw guys like Rasheem Green, Marlon Tuipulotu and Josh Fatu, along with the thoughts of fall arrivals such as Jay Tufele, it’s going to give Clancy Pendergast and Kenechi Udeze a lot of options.

Any rumors of a grad transfer & how do the scholies number add up. Possible player leaving or ineligible give us room?

This staff has shown they know how to take advantage of grad transfers (Stevie T and Taylor McNamara in recent years) but I think some of the bigger transfer names for this year such as Scott Pagano are already spoken for. I think OL, specifically tackle, is one spot that would get a look if the right player is available. Right now there is room with 83 rides projected in the fall (that number includes Jalen McKenzie) and there is a longshot of Dillon Faamatau, although he is likely a mid-year enrollee.

As we get closer and closer to the start of the season, surely someone must know something regarding EJ Price. Are there any new developments?

Helton was asked about Price after one of the last spring practices and he had no update.

Our 2014 and 2015 recruiting classes saw A LOT of players get plugged in immediately because of our lack of bodies and talent. This 2017 class (on paper) appears to be one of the best in recent years, but now we have more talent and bodies. How many from this class can we (or you) envision playing quality game reps next season and making an impact for us?

The most likely would be Stephen Carr, Joseph Lewis, Marlon Tuipulotu, Jay Tufele, Levi Jones and one of the two safeties.

Imho, one of the biggest challenges USC has is being able to defense the fast spread offensives one week and the physical run heavy, play action, pro pass offensives the next. How do you see us overcoming this?

That’s one of the big reasons the Pac-12 can be so interesting and, as you say, challenging. One of the things I like about the way Helton recruits is that he understands those needs, he will bring in some linebackers who lean toward bulk, and others who lean toward speed. Ideally you like to have both but you need to be prepared to face the run game against Stanford so you better not forget about the thumpers. That thinking applies across the board, such as big corners and slot corners. Plus I think Clancy fits well in the conference with the ability to defend the different styles.

The NFL draft and eventually the success of our players seems to reflect what sort of recruit that player may have been. I’ve heard several board members reflect upon the last few drafts as our recruits were over rated. I tend to think that our recruits have been undeveloped with the successive changes in coaching. So my question which is more telling, an underdeveloped highly recruited player, or a player who comes in solid but not as highly recruited and is coached to a higher level?

The rep in recent years from the NFL end is that the SC players haven’t been developed as much. You can draw a direct line for that to the start of the Kiffin era, which also coincided with the sanctions and fewer bodies to develop, so there were multiple issues at play. It will be interesting to see how Helton and his staff do in that regard because they pride themselves on developing the players and they certainly have enough of them. This draft was a good start to have two high-profile recruits in Adoree’ and JuJu who developed well and ended up as high draft choices, including the first ever 1st round Trojan cornerback selection.

With Corral, Hall and Crosswell transferring to Long Beach Poly, how does this upcoming class (when you also throw in the likes of Camren McDonald) compare to the heralded Poly class that produced Trojans Herschel Dennis, Darnell Bing and Winston Justice?

It makes sense to compare them, and more than one longtime Poly person was doing that on Tuesday at the showcase event. When you look at those top 4 players they have similar high rankings to the Big 5 that we saw 15 years ago, at least on paper. Of course, that group proved it and won their fair share of games for multiple years, this group is just coming together now for a one-and-done shot.

Please assess the quarterback position for the future. Obviously best-case scenario is Darnold stays for two more years, not just one. I watched your video of Corral at Long Beach and he looked fantastic. Went through all his reads and delivered the ball right on the money. We know JT Daniels can really pass. In a perfect world, would you take both? If you could only have one, which one would it be? Do you think Fink and/or Sears are good enough to hold off either or both of these two? And last, are there any others on the radar who are as good as any of these four?

It’s a continuation of the incredible run SC has had at the quarterback position. In a perfect world, Corral and Daniels are the two QB’s I would take for the next two classes and I would definitely take both (I’m one who likes to take a QB in each class). Corral is reminding me more and more of Mark Sanchez, a physically strong arm and a real presence on the field. Matt can run too, a very understated element of his game. Daniels is the top guy I’ve seen in his class but it’s hard to say if anyone will move ahead of him this year, he’s certainly got plenty of weapons at his disposal at Mater Dei to put up huge numbers. JT throws a very accurate ball and his football IQ is one of his best traits.