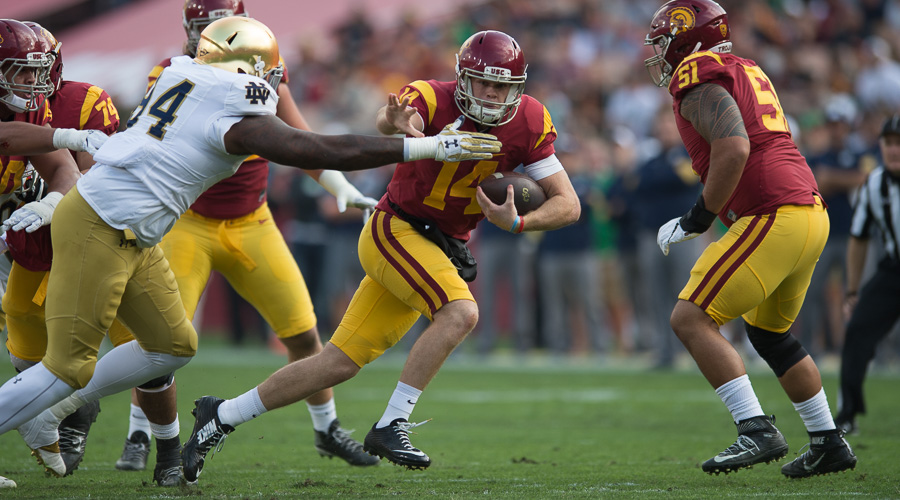 In this edition of the mailbag we talk spring ball goals, the most difficult players to replace, the additional pressure that Sam Darnold will face as Heisman candidate, and more.

Going into Spring practice, what are you most looking forward to seeing accomplished by the end of Spring?

The first question has been answered with the hire of McCullough, and you have to take notice of what he’s done at Indiana in recent years.

I would like to see a lot of progress made toward figuring out the starting five on the offensive line, and I hope to see a healthy and productive Kenny Bigelow ready to claim the nose tackle spot. Those two things would help keep us strong in the trenches as we head to fall camp.

In the article posted today about spring ball you mentioned the OL having 3 positions to fill (G, LT, RT). The biggest mystery IMHO is right tackle. Assuming EJ Price isn’t in the equation, who are the other candidates (and what do you think of their chances?).

I agree that RT is the biggest mystery, especially if Chuma Edoga is lining up at left tackle during spring with the absence of Toa Lobendahn. If that is the case (and that’s what we’re hearing will happen) then the field is pretty wide open at right tackle from candidates that could include Clayton Johnston, Roy Hemsley or Chris Brown. Nathan Smith would have been solidly in that mix if not for his knee injury during bowl practices. As you mentioned, the EJ Price factor is the real wild card, and it will be as long as he is enrolled in school, as he is right now for the spring semester.

We know Matt Fink won’t be starting this year but in terms of his progression from last year, what sort of things did he need to work on that you will be looking for signs of improvement on now that he has spent a full year in the program?

The biggest thing for Matt in his development is going to be his passing accuracy. He’s such a good athlete and I actually thought he had a solid redshirt year but his throwing game needs to be more consistent.

What would it take for a meet and greet type of event with you and a couple others to discuss Trojan football, the incoming class, and other associated topics somewhere to the north? Many interested Trojans could much more easily make a Trojan gathering in the Ventura or Thousand Oaks area.

Would be happy to do it. We’ve taken part in the SFV/Ventura County Trojan Club media event each August in Tarzana to kickoff the season but not as far north as Ventura.

What do you think would be the hardest to replace? The OL, Adoree, Juju, or Stevie T on the DL.

I will put Adoree’ first and Stevie T second. Adoree’ just impacted a game in so many ways, and with such good results, that it’s going to be very tough to replace everything he did. After all, this was the first USC corner to be named a Thorpe Award winner while also setting the school career kickoff mark, and with some dazzling offensive plays sprinkled in as well. With Stevie T, his abilities to control the middle of the line will be hard to duplicate but I’m hopeful with guys like Bigelow and Josh Fatu.

Of the returning players, who do you think has something to prove as we head into Spring practice? I’m thinking one would be Tyler Petite, who struggled with dropped balls last year and seemed to lose ground to Daniel I. in terms of playing time and reception opportunities.

I would say not only did Tyler lose ground to Daniel, I think he lost it. In my mind Daniel is the clear starter heading into spring and I think Tyler is going to face some competition from Cary Angeline to hold on to the #2 spot. Petite has legitimate skills but, as you referenced, the drops were there and that’s a problem when pass catching is supposed to be a strength of your game. Others I would add with something to prove include Chris Brown, John Houston, Isaiah Langley and Ykili Ross. Not sure how much Steven Mitchell will be available in spring but he’s another one you could add to the list.

– Chris Brown moves to tackle? 50% (it would not surprise me at all to see him at LG, or at RT, on the first day of spring)
– Toa plays guard? 30% (I still think he ends up as one of the tackles but we may not know until fall camp)
– Cook starts at one safety spot? 10% (A couple pretty experienced starters in Hawkins and Tell, but I’m looking for Cook to make a real impact)
– Angeline (who I think is a STUD) starts at TE by the end of the year? 10% (I like his game a lot but I’m not ready to project him starting ahead of Daniel Imatorbhebhe this year)
– Houston becomes a starter alongside Smith by mid-year? 40% (I’m still putting Jordan Iosefa as the likely starter in a close competition with Houston)

With Darnold set loose to go up tempo will he get to call his own plays and will we see him call more audibles?

It wouldn’t surprise me at all to see Sam involved more with calling his own plays or freedom with audibles. It’s one of the things I’m really looking forward to seeing in spring, to see what kind of wrinkles the coaches come up with to use with Sam in his second year.

How do you think Sam will handle the added pressure of being the Heisman favorite entering next season?

I don’t see it impacting him much. Sam is very well grounded and handles the attention in stride. Marcus Allen did an interview recently and he talked about how impressed he was with how nothing seems to bother Sam and nothing is too big of a deal, and how he stays calm and doesn’t overreact or underreact. He compared him to Joe Montana in those ways.

If I remember correctly, the 2024 Summer Olympic Games will be awarded in Sept. If LA is selected, do you think it will impact the renovation plans?

Here’s an article that gives some details on how the Coliseum would be used for the Olympics. The article does say that ‘some of the costs would be included in current renovation costs but the $270 million number could go higher”. There is also an update in there about how the swim stadium would take over Dedeaux Field.

Garry, you wrote previously that all of the spring practices will be on campus, except the final spring ”game”. How does this contrast with last year’s practice schedule? Is there a reason for sticking with campus practices? Thanks.

I think they went twice in spring last year, and that included the spring game. A lot depends on the coach, Carroll used to love to get into the Coliseum any chance he could, he wanted the players to be comfortable in the environment. Others want to stick to the routine of the campus practice facility, where everything is already in place to get their work done.

There doesn’t appear to be any news on the Coliseum renovation, which, in my opinion is good news. Are you hearing anything Garry? Any chance they’ll go back to the drawing board and rethink their hideous design?

As far as we know plans are moving along this spring with approaching donors about new seat locations. I haven’t heard any talk about going back to the drawing board on the design although I continue to hear there are too many people involved and things aren’t getting done quickly (perhaps that delay is a hope to rethink the design).

I recall that during the McKay and Robinson eras troy used the “I” formation with the great runners then. The fullback helped the OL open holes for the TB. In your opinion, would it be of value for the OC to revisit some of that film to recapture the use of a fullback in HCCH’s “run first” scheme’s?

Personally I’m always in favor of using a fullback. Helton has also said in the past that he wants to have a fullback as part of the offense, but we clearly didn’t see a lot of it in the first year (I’m not going to nit-pick though as the offense obviously succeeded at a high level). I just don’t know moving forward how much of a role the fullback will have, either in the traditional sense that we saw from those McKay and Robinson teams you referenced, or even as more of a hybrid pass-catcher like we saw so much under Norm Chow.