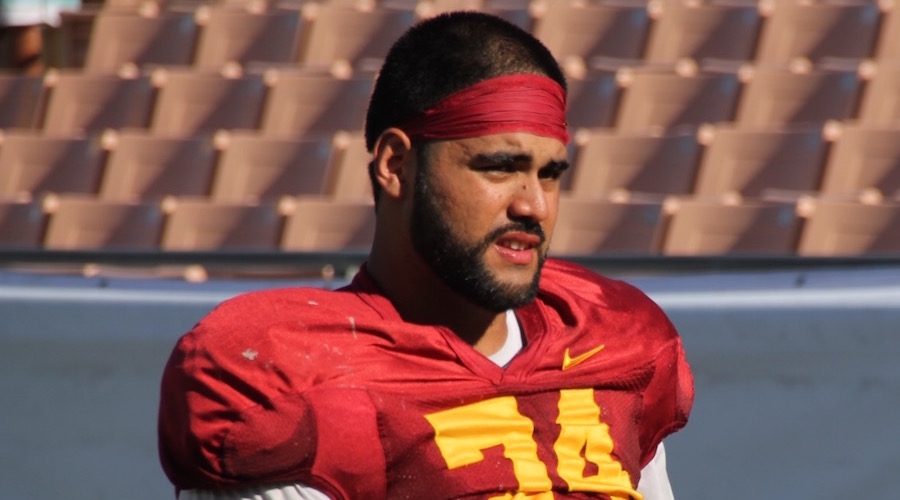 The USC Trojans have seen what can happen when depth issues hit the center position.

1n 1978, the 12-1 Trojans split a national title after the only loss of the season came when injuries forced a nose tackle named Ray Peters to flip over to center for the game against ASU, where USC promptly lost 4 fumbles and the game. Last year didn’t have a national championship hanging in the balance but the Trojans did play the conference title game with their fourth center of the year, which coincidentally turned out to be Nico Falah, who had never played the position.

Fast forward to the beginning of the 2016 season and Falah was being called on again, this time after Toa Lobendahn (who had been named the starter in fall camp) went down with a season-ending knee injury after the opening loss to Alabama. It was definitely looked at as a blow to the line to lose Lobendahn, who had long been projected as a center and was finally looking to settle into the position. On top of that, the Trojans were thought to have a veteran line that could lead the offense and now they were being forced to turn to Falah, a guy who had started at center in spring while Lobendahn was out rehabbing a previous knee injury but who had not played a ton of football in his career for the Trojans.

Falah responded by holding up the middle of the line in solid fashion and not allowing for a drop-off in production (the Trojans ran the ball for over 200 yards per game and only allowed 11 sacks) on a team that will play on January 2nd in the Rose Bowl.

“I don’t think Nico gets enough credit for what he’s done because what he did has made all the difference for us this year,” said junior right guard Viane Talamaivao. “He’s a hard worker and he stepped in at a pivotal time in our season by getting thrown into the fire and he’s done an amazing job.”

While the expectations were high for Falah to fill in for Lobendahn without skipping a beat, the situation was helped by the fact that the players on the offensive line knew each other so well. All the projected starters were multi-year starters at USC, and there was a familiarity that isn’t often found at the college level. Falah may not have been a starter earlier in his career but he was out there on the practice field with the group, putting in the work, and he felt the responsibility to come through this year when he was called upon.

“That was a big job put on my shoulders,” Falah said, “but my teammates were giving me a lot of feedback so that did a lot to boost my confidence. We’re a family on the o-line, we’re not a position group. Everybody knows each other so we can work together in any combination and feel comfortable. That’s a good thing with any unit is that we’re close with each other.”

An interesting twist to the whole dynamic is that Falah and Lobendahn are friends (and roommates, along with Talamaivao and JuJu Smith-Schuster) so Falah had to temper his concern for an injured friend with the need to focus on the task at hand, with Lobendahn being a key figure in helping Nico in the transition.

“My prayers were with Toa, that’s my best friend, and he was big in helping me out because he’s such an experienced guy,” Nico said.

Lobendahn pointed out that the two were learning the center position at the same time, and Falah was prepared for his opportunity when it came.

“My guy was always there,” Toa said. “I didn’t have to teach him much. He did a tremendous job of stepping in right away after I got hurt and kept this thing moving forward.”

Falah said the experience he gained in spring working with the first unit helped him become comfortable with being the starter and that helped him this year once he took over the job. Things didn’t go as well as hoped for the team at the start of the season but they eventually got turned around and Falah has certainly appreciated the journey.

“We started off slow at 1-3 but we picked it up and the whole team is having fun right now,” Nico said. “For me it’s been great finally getting a starting job and I’m enjoying every moment of it. Best year of my life I would say, my young 21 years.”