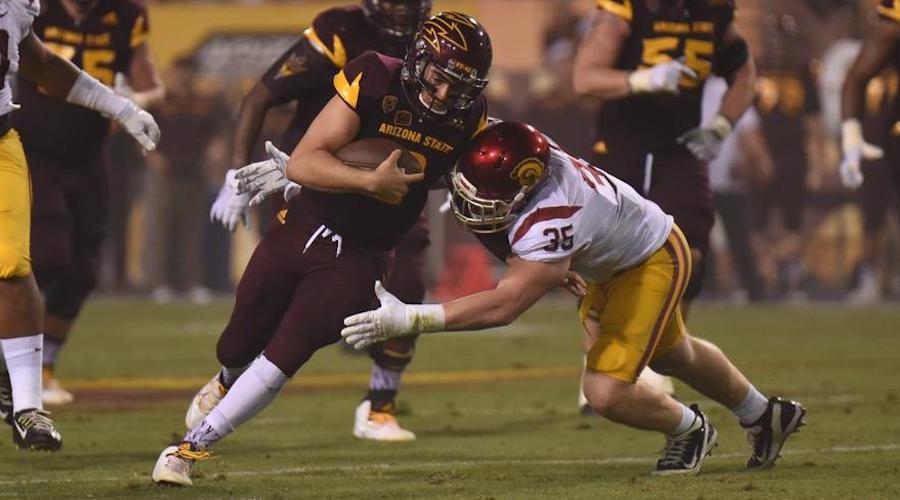 The Trojan return home to the Coliseum on Saturday with a 1-3 record and this time it won’t be Utah State waiting for them, instead it will be the 4-0 Arizona State Sun Devils, who are fresh off a 51-41 victory over Cal last week that saw them score 31 points in a dramatic fourth quarter comeback.

That’s not necessarily good news for a USC defense that is still stinging from what happened last week in Utah when the Utes mounted three long touchdown scoring drives to finish the game in a pretty dramatic victory of their own.

ASU comes in ready to run the football with a pair of pretty good tailbacks in Kalen Ballage (averaging 6.7 per rush with an FBS record-tying 8 TD’s against Texas Tech) and DeMario Richard (team leading 348 yards through four games), along with a dual-threat quarterback in Manny Wilkins who has a 4.7 yard rushing average along with four touchdowns. Wilkins is a first-year starter but he has played well enough so far to allow the Sun Devil offense to get off to such a strong start. Wilkins also has good receivers in explosive Tim White (also a good KR and PR) and freshman N’Keal Harry (a one-time USC recruit). White is the son of Timmy White and nephew of Lonnie White, both former Trojan receivers in the 80’s.

For the USC defense, their confidence took a bit of hit against Utah after being a fairly solid unit through the first three games. The Utah game was the first time in 85 games that the Trojans held a 10-point lead in the fourth quarter and ended up losing the game, and now the Sun Devils come in averaging over 48 points per game (leading the Pac-12). It will be no surprise for the Trojans if Cam Smith leads the way (he had a team-high 15 tackles last week) but one big key for USC will be the ability to put pressure on Wilkins when he drops back to pass, it’s something that just didn’t happen last week and the Utes hit some big passes at critical times.

The good news for the Trojans comes on the other side of the ball with the energy that was provided by inserting Sam Darnold into the starting line-up. Not only did Darnold spark the offense with his solid play but it was his intangibles as well. It was the way he tucked the ball and ran with purpose, the way he hit a key 3rd down pass despite a defender draped around his ankles, and the way he responded to three straight possessions that ended in fumbles by leading four straight scoring drives of his own.

What Darnold brought in the Utah game was so much of what this offense needed and, as luck would have it for the Trojans, the ASU defense is a bit vulnerable to the pass based on what we’ve seen so far. The Sun Devils are ranked 128th in the nation (last) in passing defense by giving up over 400 yards per game although that stat is certainly skewed by match-ups against pass-happy systems such as Texas Tech and Cal. Regardless, if the Trojans can continue to take another step forward with Darnold at the helm (5 different USC receivers caught passes of 15 yards or more last week) it would be a very encouraging sign for the chances of coming away with a win.

And that’s all that really matters this week is a win. As Justin Davis said during a post-game radio interview after the Utah game, “USC is not supposed to be 1-3”. He’s right, but that’s where things are right now. Clay Helton knows how that looks as he tries to show his new boss that he is the right man for the job, and the players know how that reflects on their time as USC football players. And there is only one way to start changing that, by going out and winning some football games.