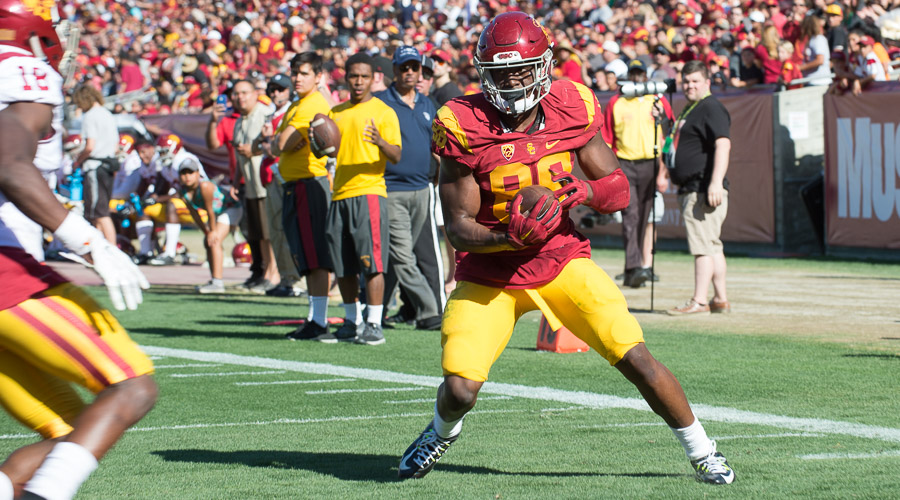 In this edition of the weekly mailbag we discuss the proposed Coliseum tower, the tight end spot, the abundance of offers with relatively few commits, and more.

Without giving away too much info to Nick Saban, do you and your staff think SC will be a run-first team or do you think our strength will be the passing game?

I do believe the run game will be the strength of the offense this year (and the best match-up against the Tide defense). Clay Helton talked in an interview this week about wanting to take advantage of the USC offensive weapons (which are plentiful) while also being able to run the ball when you need to run the ball. He then referenced the Cal, UCLA and Colorado games as examples where the Trojans ran the ball late in the game to close out victories. But the first part of the statement shows that the overall balance toward the run may not be that severe with the Trojans having so many ways to move the ball and score points.

Hello Garry! How hard are we going after Tate Martell now that he has de-committed from A&M, and is he reciprocating interest in SC?

Nothing there right now. You never know what can happen in quarterback recruiting but at the moment both Tate and USC are focused elsewhere.

Any fan group to protest the Tower?

I haven’t heard of anything but I sure would like to see the fan voice heard on this one. Hopefully there will be an opportunity after Lynn Swann is in place because I don’t see anything happening in the last month of Haden’s tenure.

Garry who are your pick’s to emerge as our number 2 and 3 go to receivers this season?

Darreus Rogers is the most obvious choice as he looked really good in spring ball. The next choice is probably Steven Mitchell, who will be the starter in the slot and will see a lot of balls come his way. But something tells me not to rule out someone like Isaac Whitney, he was making a lot of progress last fall before his injury and he could end up getting plenty of catches as well.

Will Lynn Swann as the new A.D. have any sway in decisions concerning the Coliseum remodel ( a polite way to ask if he can nix the awful tower concept and protect the fan base and alumni) ? How active do you see him in this role?

At his introduction press conference we were told that Lynn would be involved with the Coliseum project but there weren’t a lot of details provided about his role. I do hope, as mentioned earlier, that there will be a chance for Swann (or others involved) to genuinely listen to feedback about the tower because so far there hasn’t appeared to be any forums to express that opinion to the athletic department since the renovation plans were released.

What are the differences/similarities you see between the Imatorhbebe brothers in terms of skill sets?

Way more similarities than differences. Even though Daniel (photo, above) is a little taller and heavier they do have similar frames, while Josh brings more pure athleticism. Watch this video from the official USC site and you can see how much they are alike when standing side by side, their mannerisms, etc.

Is it me, or has this been a lot more offers going out than in past years (up to this point)? I like the wider net, but with so few commits (4, 2 soft)…it almost looks a little desperate?

The Trojans are basically in the middle of the pack with other top teams around the country in terms of offers out there (roughly 150 right now). Michigan (273) and Alabama (232) are schools with a lot more, Oklahoma (158), ASU (165) and Ohio State (125) have similar numbers while Washington is one school being more selective with 90.

I was very surprised that Max Browne wasn’t named the starter after the Spring Game. He looked great that day at the Coliseum & according to all reports has done a fantastic job since Cody exhausted his eligibility. Part of my thought process is that this program have suffered enough drama over the last few years, & naming a more than deserving Browne as starting QB would have helped stabilize the team this heading into the 2016 season. I know Darnold will be great one day, but Browne has earned the chance to lead this team now IMO. Thoughts Garry?

Your points are valid and a lot of Trojan fans share your view. I’m going to link to a pair of post-spring articles where this topic was discussed, the first link is to the Trojan Talk that Johnny Curren and I did prior to Helton’s decision, and the QB competition is one of the first topics discussed. The second link is to a mailbag that was done right after Clay Helton made his decision (scroll halfway down to the question posed by scdg71).

Since there has been so many posts lately re: the physicality of the team, and I’ve also read posts suggesting that our tight ends are not particularly good blockers or very physical, I’m curious to read your take on this Garry. As we all remember, we didn’t throw much to the tight ends last year either. What are your opinions about the tight ends? Thanks as always.

I think the tight end group could be the most improved unit on the team this year compared to where things were last year. At this point last year we were facing the loss of the top two TE’s on the depth chart (Dixon and Cope-Fitzpatrick), and the prospect of relying on a grad transfer (McNamara), a true freshman (Petite), a walk-on (Spears) or a converted offensive lineman who had been out of football for a year (Hobbi). Now we have a returning starter senior, a true sophomore with big-time potential, an eligible transfer who lit up the spring game, and another promising freshman set to arrive in the fall. I would call McNamara and Imatorbhebhe the best blockers of that group right now.

What’s your take on why our recruiting class seems to be low/lagging in numbers ???

I’m not as concerned as some about the current numbers because we’ve been in similar situations before at this time of the year and things usually work themselves out by the time signing day rolls around. And if there is one thing this staff proved on signing day a few months ago it’s that they have patience with the process. It would have been very easy to panic with as many as 7 open spots heading into signing day but they stuck with their plan and it worked out.

Back in the day, did the best offensive lineman come to USC because we ran the ball? I mean those guys just love to smash mouth for a good tailback. So maybe running the ball will bring in the best blockers as well as the best runners.

It was the entire package. We ran the ball with great backs, we had a tradition of doing it, and that attracted the best offensive linemen. I watched tape of the 1978 USC vs Alabama game the other day and our OL featured Anthony Munoz, Brad Budde, Pat Howell and Keith Van Horne. You don’t get much better than that, and I would love to see us get back to that standard.

Garry- When everyone reports in the fall, what’s your best guess on the 2 deep for the Defensive Line. Do you see any surprise?

I’ll say DE (Green, Rector), NT (Jefferson, Daniel/Latu), DE (Dorton, Scott). The main thing I would hope to see is Josh Fatu coming in and earning a spot in the rotation right away, and my guess is that would be at nose tackle. That could allow for Jacob Daniel to move around at either nose or defensive end with Dorton/Scott. The other thought would be Connor Murphy getting time right away, he has the physical skills to do it, we just may not need him immediately if everyone else stays healthy.

Garry, With the scarcity of true fullbacks in high school football, are there recruits out there that you feel could transition to play FB in SC’s system? If there are, what probability would you give USC to land one of them?

I can’t say that I’ve seen any on the 7-on-7 circuit this spring but that setting isn’t exactly an ideal breeding ground for future fullbacks. We may get a look at potential fullbacks, either true fullbacks or those converted from other positions, when the Rising Stars Camp takes place or it may have to wait until fall when the high school season gets underway. The coaches have made it clear they want one and they understand they may have to be creative with moving a player, like they did this spring with Reuben Peters.