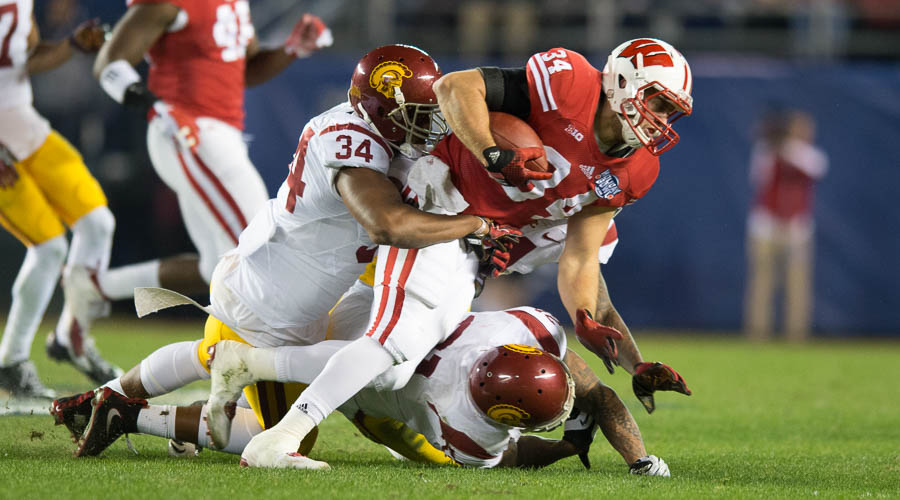 Am I in a minority being thankful that this season is finally over?? Really I am. With all the turmoil, changes, a few ups and mostly disappointments looking forward to next season is a more positive viewpoint than yet again describing a defensive performance that was inadequate to the challenge. And at the same time watching a Wisconsin defense play at the level, intensity and crispness that we only can wish for and look back and say “yeah we used to be that good and even better.” We’re all Trojans and wouldn’t trade that for anything but we need to start teaching, coaching and executing at a Trojan level and that is now to review 2015 season, recruit and Spring ball. This season is in the books…8-6 with only two quality wins, a new HC and a TBD coaching staff. If this was a sample of our future we are in for a bumpy ride for a while.

Ironically the DL clearly outplayed our OL, LB’s and secondary. We used a 3-4 with NT and 4-3 with four true DL’s. We routinely rushed five to apply more pressure with limited success gaining only one sack and five TFL’s. Secondary coverage was both man and zone though I was confused as to exactly what were the coverage responsibilities. Apparently I wasn’t alone as our LB’s and safeties were in a daze at times giving up easy underneath and short routes in crucial situations. It seemed like we struggled stopping first down effectiveness leaving Wisconsin with many manageable second and third down situations. The Badgers converted 6 of 15 3rd down situations and interestingly didn’t attempt any 4th downs but played a successful field position game. Offensively we converted 5 of 14 third down situations and 2 of 3 fourth down situations. To put matters into perspective in our last game we lost the TOP battle to Stanford badly 24:10 to 35:42 with ‘Furd banging out 64 plays but 41 points. Well if you thought that was bad last night we again lost by a larger margin the TOP battle 22:42 to 37:18. And in both games we had killer turnovers due to lousy pass protection in crunch time while forcing zero turnovers of our own. We were confused but our opponents were not. That may work early in the season against Sunbelt competition but it sure won’t win too many games against quality opponents or in the post-season.

So what happened? Well this is an interesting perspective from Chris Hawkins,”Second and 10 is a hard pull….so is [trying] new techniques this last week.” Huh? They were learning new techniques with only 8 practices and only a few of those were full speed full pads. I dunno folks but that seems untimely to teach technique unless it’s just a minor tweak though I guess if the coverages were tighter and better then all is good but we know our pass defense was anything but tight. What was obvious is the overall confusion we had picking up crossing routes, TE and the occasional wheel route. Also we continue to struggle tackling especially second level with our safeties and LB’s having a real off night. It was clear to all that the two back set and a FB POA blocking scheme, misdirection and play action caused us real headaches. None of these actions should have been a surprise as Wisconsin scouting was clear that this is what they do and it is also consistent to what Stanford (twice) and ND did to us. Frankly the only element of the defense that seemed to work at all consistently was the DL in particular the team leading tackler for the game Simmons (11), Woods (8), safeties Tell (8) and Hawkins (8). One sack by Townsend who also had our only QBH (quarterback hurry). Not very productive especially since we brought five rushers frequently. With Seymour not playing Langley was tested often one-on-one with mixed results. Marshall as a result got more safety help. No line stunts or twists though Townsend took an inside route to his sack. I could go on but you get the message…not a good defensive performance though the TOP battle was lost more by the offense than the defense. But when we absolutely have to have a stop we couldn’t get it done on defense combined with a poor punt and short field, a fourth quarter field goal and no response from the offense…boom 8-6 season and fortunate at that. I guess there is some solace in the fact that there was the small crowd (48,329), late kickoff time and lengthy preceding game few people witnessed this disappointing game.

So we have the players’ choice as HC and we are wishing Clay Helton well but these early signs are concerning in particular the breakdown in defensive fundamentals and the O-line’s sad performance coupled with running backs not blocking anybody. We haven’t finished the season with positive momentum but that just means we have to create it.