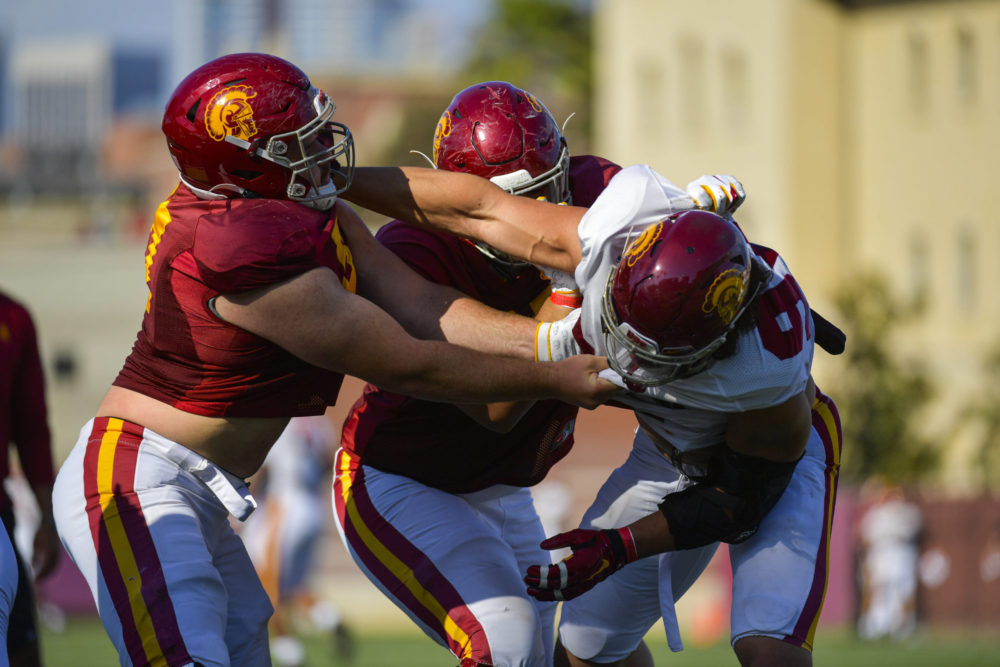 Five-star offensive tackle Josh Conerly Jr., the top offensive prospect in the West region, announced his top 12 schools on Tuesday and USC is still in the mix.

USC was listed along with Alabama, Arizona State, Auburn, Cal, Michigan, Oklahoma, Oregon, Stanford, Texas, UCLA and Washington in the first significant recruiting cut for the 6-foot-5, 275-pound offensive lineman from Seattle Rainier Beach High School. Conerly is the No. 15 overall recruit in the 2022 class, the No. 2 offensive tackle and the No. 2 player in the West region, behind USC commit, cornerback Domani Jackson (Santa Ana, Calif./Mater Dei).

There is clearly a Pac-12 feel to the recruitment, with more than half the finalists from that conference. But there are some recruiting heavyweights still involved and interested in getting Conerly away from the West Coast.

Conerly has been to the USC campus and the Trojans are recruiting him as an absolute priority in this class. USC is one of just two programs in the country that has produced first-round draft picks on the offensive line in the last two NFL drafts, which will definitely be a recruiting pitch to Conerly and other offensive linemen.

Conerly is the best of a terrific group of offensive linemen in the state of Washington in this 2022 class. Four-star guard Dave Iuli (Puyallup, Wash./Puyallup), four-star tackle Malik Agbo (Federal Way, Wash./Todd Beamer) and four-star guard Vega Ioane (Graham, Wash./Graham-Kapowsin) have all earned USC offers and interest from the Trojans in this recruiting cycle.

Washington is looking for success in keeping the top in-state players home, but there were a few slips last year. Defensive end J.T. Tuimoloau remains uncommitted as the top player in the state, but No. 2 prospect wide receiver Emeka Egbuka signed with Ohio State and No. 4 recruit linebacker Julien Simon is at USC.

Reeling in Conerly would be a massive recruiting win for USC and offensive line coach Clay McGuire. In each of the past three classes, USC’s highest-ranked offensive lineman checked in at No. 299 overall (Jason Rodriguez in the 2019 class), No. 356 overall (Jonah Monheim in 2020) and No. 386 overall (Mason Murphy in 2021). Conerly and four-star offensive guard Earnest Greene (Bellflower, Calif./St. John Bosco) are two of the top offensive line targets for USC in this 2022 class.