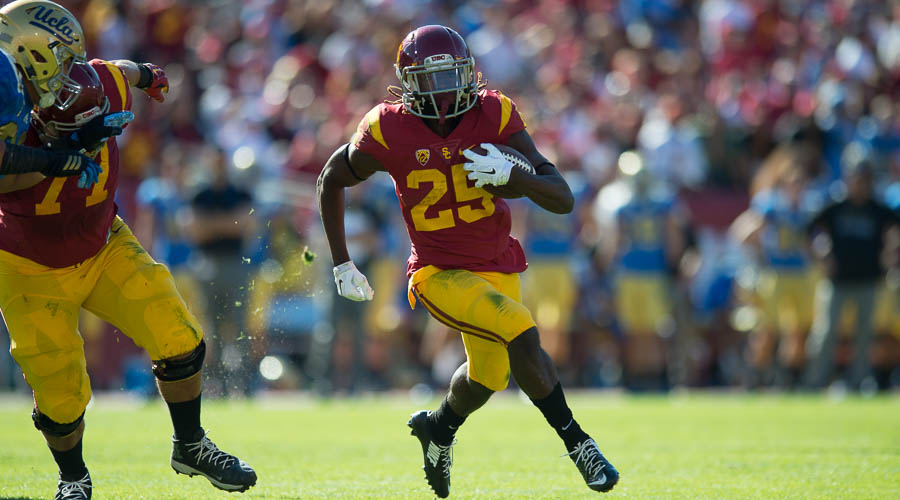 Here are five key offensive questions for the Trojans in the upcoming spring ball practice sessions:

What will be the identity of the offense?

Clay Helton has stated that he wants to have a physical identity in the trenches, and a big part of that will be a focus on establishing a power run game. That is music to the ears of many USC fans. This spring will be the first opportunity to show that in action as Helton and offensive coordinator Tee Martin begin installing the system they want to run, and the pieces are in place to warrant that kind of emphasis on the power run game with a pair of talented returning tailbacks, a veteran offensive line and a good group of blocking receivers. There will be other questions too, such as the tempo of the offense, will there be a fullback, how much shotgun will the Trojans use and will they huddle? The answers will start to come once the team hits the field.

Is this O-line ready for a lead role?

On paper, the answer to this question is a resounding yes. The Trojans will return starting talent across the board, with the majority of returnees being multi-year starters. It’s not too often in college football that you have this much experience coming back and the timing couldn’t be better for that group to take a step up and be the elite line that Helton will need to run his offense. A big key to how the line performs is new position coach Neil Callaway, a veteran guy who has been a head coach, spent a lot of time in the SEC and once played for Bear Bryant. As far was resumes go, that’s a pretty good one.

Who will be the quarterback?

OK, this was an obvious one but that’s because it’s such an important question. The Trojans return starters at every other offensive position so whoever wins the job will have the luxury of a lot of support. That means making the correct decisions and eliminating mistakes are likely to be two of the major factors in spring in terms of potentially naming a starter at the end of the 15 practice sessions. Max Browne is the veteran candidate, the one who has waited for this opportunity for three years and is as prepared as you would hope to be. Sam Darnold is the primary challenger, a guy with a lot of physical ability, and there will be plenty of attention paid to see how they go back-and-forth in spring.

How deep is this WR group?

If everyone is healthy it can be plenty deep. On the outside you have guys like JuJu Smith-Schuster, Darreus Rogers, Isaac Whitney and De’Quan Hampton, plus a couple early enrollee freshmen in Josh Imatorbhebhe and Michael Pittman. In the slot you have Steven Mitchell and Deontay Burnett along with the return of Ajene Harris, and the possibility of Dominic Davis as well. There will be no Jalen Greene, who will spend the spring at quarterback, and Adoree’ Jackson will not be available either as he focuses on the track and field season. With their position coach as the new offensive coordinator it means a lot of familiarity, and it will be interesting to see how they are used with an influence from new passing game coordinator Tyson Helton.

How good is the duo of Justin Davis and Ronald Jones, and will they have a fullback to block for them?

It’s not unreasonable to think that Davis and Jones could each rush for over 1,000 yards next year. Each of them is capable of being a lead back but they both understand there is plenty of work available in sharing the job, and that should pay off in a big way for the Trojans. Davis really came on strong at the end of last season and he has worked with new RB coach Tommie Robinson before, while Jones could be as dynamic as they come with an explosiveness that you just don’t see very often. Helton plans to use a hybrid-type role with one of the tight ends since the Trojans don’t have a pure fullback on the roster right now, and don’t be surprised if Daniel Imatorbhebhe gets a long look in that spot.