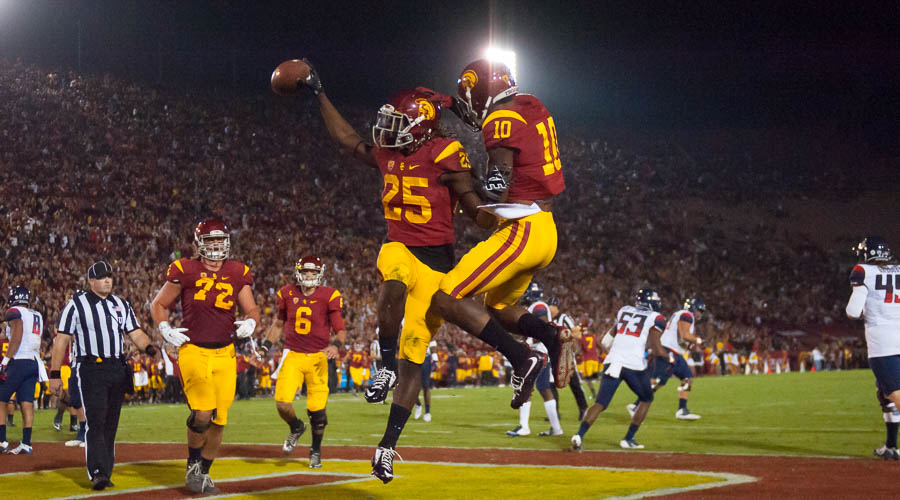 Years from now when you look at the 20 margin of defeat from last week, you must recall at some point how the Trojans battled back to within 10 points, and were moving the ball in the early fourth quarter and every single one of us were thinking the same thing: “This could be one of the greatest comebacks in history!”

Two plays later that was over, but not the season. Not by a long shot.

At game’s end I got to call the waning moments of the Ucla won at Utah that propelled us into the Southern Division championship game. When that ended, all of the administration party sitting in the booth over our right shoulders erupted in cheers, unmuted.

The Trojans are a good team. They are playing for a spot in the conference championship game, at home, and favored by more now than originally to beat another good team, one they’ve lost to for three long years.

And often the team that wants it most when the two teams are well matched, gets it.

And that will happen Saturday afternoon. Man, I hope so.

I stopped in for a chat with Coach Helton today, and while he is usually reserved in his comments when the microphone is hot, today there was more of a twinkle in his eye and voice.

The team seems very energetic about the matter at hand—a chance to become the stuff of legend.

Run the ball, but don’t forget Kessler is a really good thrower, too. Use Adoree more on offense. Pressure Rosen, but don’t let him leave the pocket—he can run. Keep Perkins under 100. Commit no more than 60 yards in penalties. Win the turnover battle by 2. Make Fairbairn kick field goals while we score touchdowns. For once, let’s just get ahead by a couple of scores and never let up. And the crowd will matter, so please leave it all in the stands—don’t hold anything back.

Our broadcast team is poised as well. It’s the penultimate conference game for us and we’ve prepared all season to be in this spot.

Men’s hoops 4-0, women’s hoops 5-0. Men’s water polo into the NCAA tournament next week. Women’s volleyball one of the pre-tournament favorites to win it all.

I spoke at the SoCal Sportscaster with Chris Roberts, who no longer does the Bruins games and their color man Matt Stevens. Then yesterday it was the Torrance Rotary lunch with John Papadakis and Kris Farris. The Band and the Horse and the Songirls were all there. They had a guy dressed in a bear suit and recorded music. Good omens, that they’re getting lazy.

Tomorrow, it’s the 8th annual Jenny and Peter Thanksgiving Pie giveaway on the Venice Boardwalk at the paddle tennis courts starting at 9:30 am. If you can and want to come down, everyone is invited to help hand out slices of pie, and just enjoy the day until about 1.

Time to finish up my pre-game prep.

Beat the bruins. And Fight ON!!