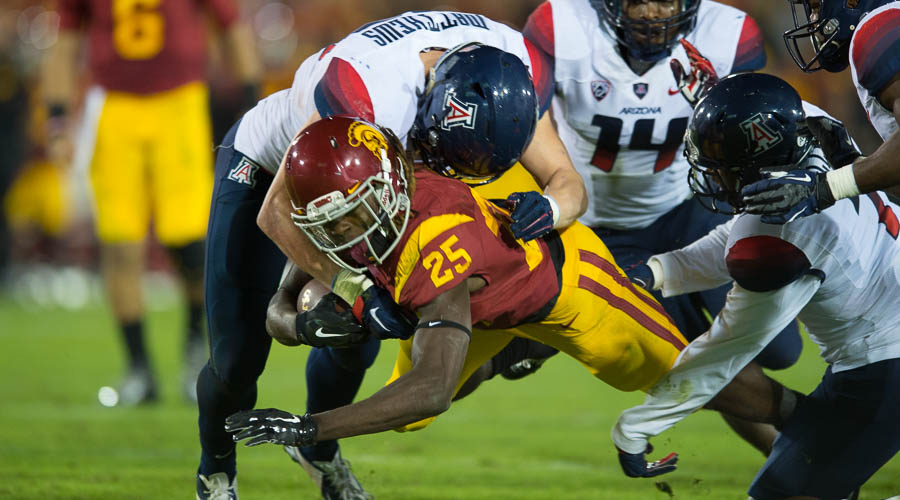 Those night games really make for a long, long day. But in the end, it all came out okay.

The first quarter went about as badly as you can imagine. But once the guys woke up, it was a matter of by just how much they’d win. The throw away TD for the U of A at the end made it seem closer than it was maybe, but I still feel like our team is performing really well only in spurts, and only in different positions at different times.

We can be so great looking for stretches and then totally vanish at other times. I realize fully the other team has a lot to do with that.

All that aside, the run game is coming along particularly when running right.

The defensive front guys are really getting better, although they seldom actually get to the QB, they sure are tough on the run, and force the QB into some bad decisions.

Our pass blocking leaves something to be desired.

And “The Breeze” is just as good as we were talking about when we first saw him run the first week with pads on at summer practice. We’ve been telling you and telling you this guy is special, SO special that years from now they’ll be comparing some other young runner to HIM!

I’ve been asked about the nickname we’ve given #25—it just came naturally, nothing we made up or thought about, I said it I think in the Utah game, when a Ute tackler tried to grab him going by and ended up hugging air and then himself…”all he got was a Cool Breeze going by”

And it has stuck. It’s sort of grown organically since then. The Breeze is all you feel when he runs past.

I just kind of hung out at home all day before the game, doing some work and peeking in on other games from time to time.

Afterwards, well sheesh it was 1 am when we got home.

This week sort of begins the pre-Ucla lunch, dinner and breakfast tour. Two of them this week on Tuesday at Lakeside and the Glendale QB Club at noon at the Elks Lodge on Colorado, two next week on Tuesday and Thursday—that one at Town and Gown., two the following week on Monday at Sportscasters and Tuesday at the big Rotary one in Torrance.

This is a short week of course, we leave on Thursday for a Friday game, so everything has to be done a day early. And Jenny is going to Colorado on our own dime (her first trip there) so we will see the sights on Friday including a drive to an old friends place—Carlos Macis owns and runs his own Tapas bar about an hour and a half from Denver so we’re going to go there for Friday lunch after having dinner with the traveling party Thursday night when we get in.

Carlos and I were best friends from 6th through 10th grade along with another buddy Steve Jenner who lives down in Oceanside. We had a great tie growing up together…surfing, music, girls…late 60’s.

All good then, other than the 38 degree weather at kickoff, dropping consistently throughout.

Congrats to the women’s soccer team that grabbed a #4 regional seed and host CS Fullerton on Friday afternoon…favored to win that and the next one and play Virginia in the regional semi final at worst.

Men’s water polo will be tough to beat in the home pool in the conference tournament next week, and of course the women’s volleyball team will win the Pac-12 and advance as a top four seed to the NCAA tournament, where they’ll host the first two rounds.

And the football team, which still has work to do, also has some good things waiting in front of it. Starting this week.