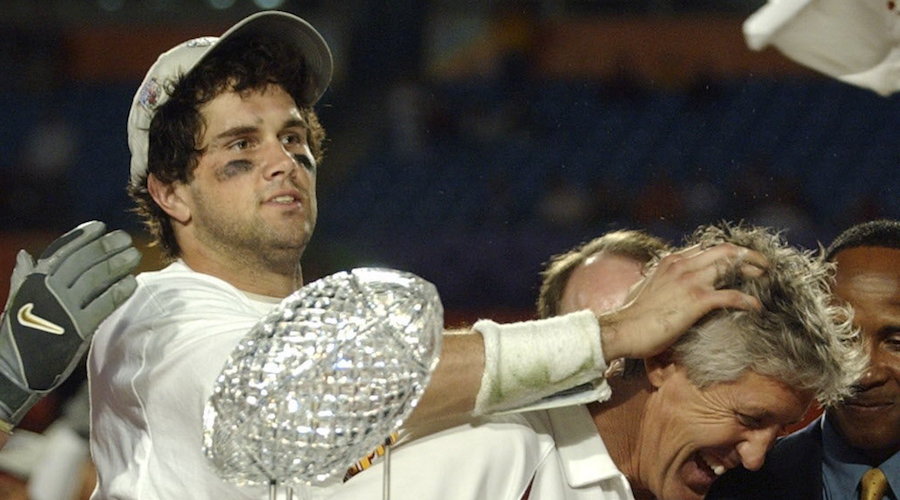 I had a chance last night to go to the screening for Trojan War, the ESPN 30 for 30 documentary that is coming out next week.

The first thing I would say is that the film is a walk down memory lane for USC fans who appreciate what was accomplished in the Pete Carroll era. The extensive amount of footage and interviews they got gives a look back at one of the most enjoyable runs any of us can ever remember.

The interesting part is the way they framed it. I think the expectations from USC fans about what this film would focus on have been all over the map, and it certainly isn’t going to satisfy anybody who was hoping for an in-depth look at how USC got overly punished by the NCAA.

Instead, the narrative is told from the point of view of how Pete Carroll “took advantage of the resources made available to him”, according to Keyshawn Johnson, who was involved in putting it together. That main resource discussed is the Hollywood factor, and the story is told about how Pete embraced the many Hollywood connections that are tied in with USC to help attract the bevy of talent that eventually built a dynasty.

You can’t deny that there is a connection between USC and Hollywood, there is too much proximity and too many ways the two are intertwined to say that it doesn’t exist. The film tells of how the USC Cinema School got started when USC president Rufus Von Kleinsmid would go to fence at the LA Athletic Club with Douglas Fairbanks, who at the time was the biggest movie star in the world and who wanted to set up a place for study of this new medium called film. There is mention of the fact that John Wayne himself played football for the Trojans, and about the different celebrity marriages including Curtis Conway/Laila Ali and Rodney Peete/Holly Robinson.

One of the primary interviewees in the film is Snoop Dogg, including footage of him rapping with the players in meetings (Eric Wright) and catching passes at practice. Snoop also has two of the funnier lines in the film, from showing his disgust at memories of the Texas loss (something that most everyone reading this will relate to), and what his response would be if he were Reggie Bush talking to the NCAA about the location of his Heisman.

The film also talks about how the USC players had access to the many trappings of Hollywood, from meeting celebrities to being VIP’s at various clubs and about how the hangers-on from that scene were bound to be around. As one interviewee said “if you want to find darkness, you can find it”.

It was this focus on the Hollywood aspect that left a few of the former players I talked with afterwards with mixed feelings about what they had watched. Obviously this was something they lived, and they are understandably proud of what they accomplished on the field. The film doesn’t gloss over what they did, it gives a very thorough account of the glory years and plenty of footage to enjoy, but the Hollywood focus is definitely a major part of the film.

The film basically starts with Reggie’s Heisman ceremony to mark that crowning moment, and then goes back to talk about Pete’s building of the program, which eventually gets back to the Heisman ceremony and the game against Texas. There are interviews with guys like Vince Young and Mack Brown, and having to relive scenes of that game were as painful as ever (like many of you, I’ve never watched the game again and never will). That game is basically identified as the beginning of the end of the Carroll dynasty, with plays such as the Reggie lateral used as an example of the arrogance that had come along with the excesses.

At the end of the day for me, the USC interviews and footage that help guide the film through this time period were particularly nice to watch, from Leinart to Pete to LenDale, Holmes, Hancock, Byrd, etc. There was a classic comment from Leinart right before the Bush Push when he said he looked to the sideline at Pete to get direction on what to do and Pete just shrugged. There was no Reggie present day interview, although Keyshawn said they tried multiple times, but there were plenty of past clips, including one after the Texas loss where he said “nobody can ever take the wins away from us”, to which one person in the crowd said out loud “the NCAA can”.

And that NCAA cloud is a factor that can’t be ignored. If a 30 for 30 about USC was going to be made, most Trojan fans would have wanted an in-depth look at how wrong the case was, but that’s not what you’re going to see here. Keyshawn said one of his goals was to show how little any wrongdoing was actually connected to USC, as opposed to infractions that were being committed on campus at schools like Penn State and Miami. The house issue for Reggie’s parents was discussed, including a clip of Reggie saying “when all is said and done you will see we did nothing wrong”. Unfortunately, that just wasn’t the case, and it provided the film with a cinematic ending of how the dynasty eventually came to an end.

Trojan War will debut on ESPN on Tuesday, October 13th at 6 p.m. PT