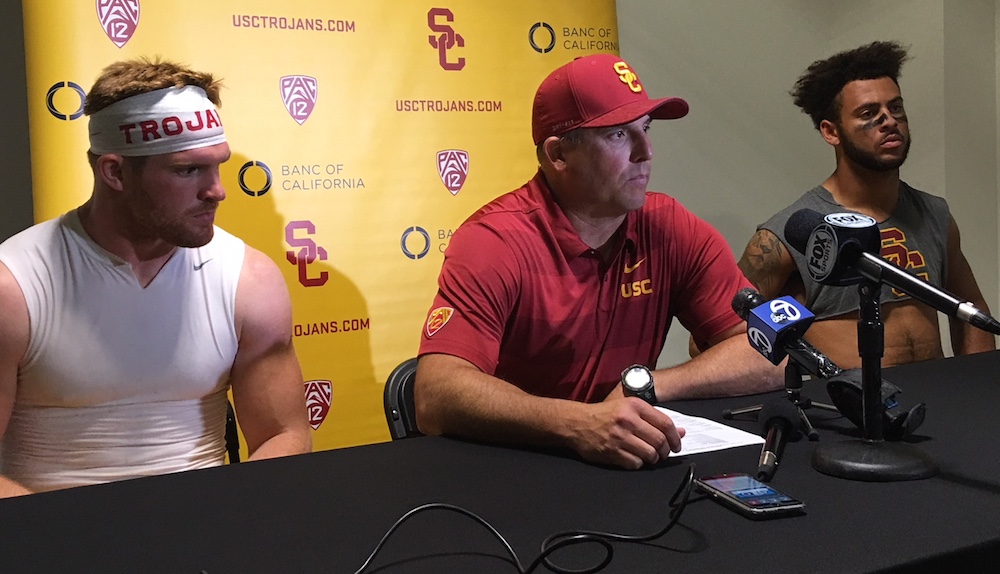 We had a rematch of the Pac-12 Championship game from last year today in Palo Alto. But unlike both of their matchups last year, Stanford was able to top the Trojans tonight 17-3 thanks to their Heisman hopeful Bryce Love. Right out of the gate, Stanford made their presence known as they wanted to get their Heisman hopeful back into the national conversation. On their first drive of the game, Love and that Stanford offensive line drove right down the field and put the ball in the end zone. Even when USC was able to shut Love down, Stanford put their trust in their quarterback K.J. Costello. He was able to play those mismatches beautifully as Stanford’s tight ends were able to basically box out the USC secondary. When USC got the ball, it just seemed as if they could never get in a offensive groove, as they were not able to even cross the 35 yard line until the second half.

When the second half started, USC looked better, but Stanford was just able to keep doing what they had been doing all game, which is take time off the clock, and give the ball to their star running back. The USC offense just seemed to not be able to make any sort of push except for a field goal that they scored in the 3rd quarter. With the Stanford victory over the Men of Troy, here are three takeaways from the game.

1. USC just could not get anything going

Even last week against a much weaker UNLV team, USC was not really able to make much noise until the fourth quarter when they were finally able to break away from the Rebels thanks to some deep passes from J.T. Daniels. Tonight, they just could not get anything going whatsoever. Sure, they were able to string together a few runs every now and then, but when they needed to put the ball into the end zone, they failed to do so. Daniels was constantly under duress all night, and that is not what a true freshmen needs. The offensive game plan tonight really did not seem to help as it really just looked like their plan switched constantly through the night. If USC wants to have a successful season, they really need to work on getting their offense into a groove, and to get them into the end zone!

2. Stanford just did what Stanford does

What has Stanford long been known for? Putting two to three tight ends on the field and just pounding the opposing defense with their running back until the defense could not stop it. If that doesn’t work, they just feed their big tight ends. Tonight, it was no different. Bryce Love bounced back after his dismal performance against San Diego State with 131 yards and a touchdown tonight. K.J Costello followed up his strong performance against the Aztecs with another solid one tonight against the Trojans, throwing for 183 yards and a touchdown. Stanford is not the team that is going to win with style points, but they really don’t care and why would they? If they are winning football games, who cares what the stats look like. The only one that matters is the W on the scoreboard, but that is the way Stanford wins games.

3. It does not get any easier from here on out for the Trojans

This early season slate for the Trojans is going to be a rough one. It does not get any easier from here. Next week, they travel to Austin to face the Texas Longhorns. After that, they go to Arizona to face a potential Heisman hopeful in Khalil Tate. With matchups against Utah and Notre Dame later on in the season, this potentially could be a long year for this Trojan offense, and the focus of the fans will be on Clay Helton and his coaching staff to get their players ready for the vaunted upcoming schedule.