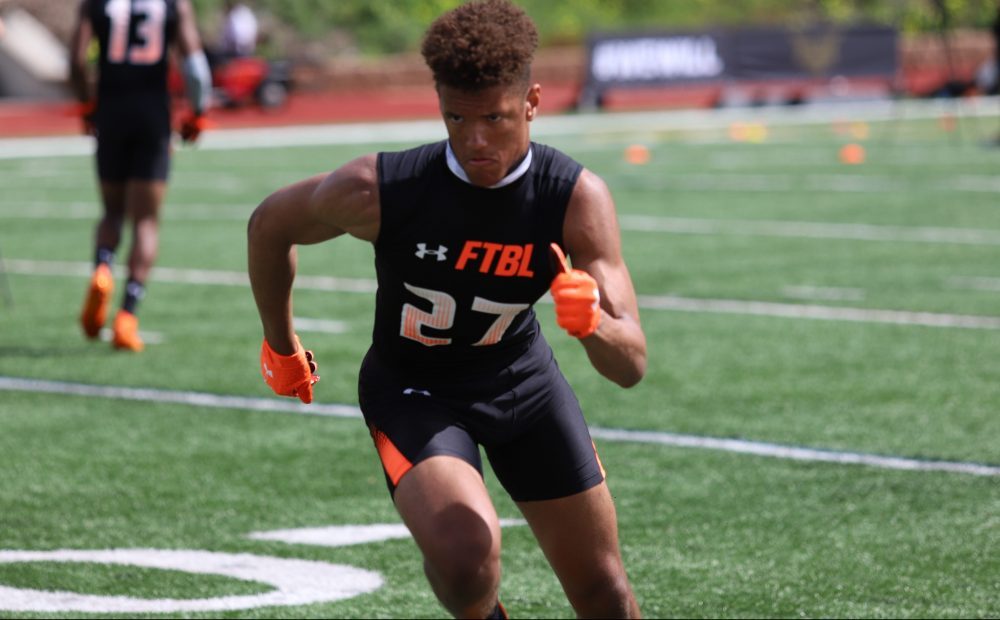 USC Trojans coaches haven’t been shy about throwing offers around this spring, getting in the mix for more than a few top national prospects. One of those recent offers went to 2022 linebacker Cyrus Moss (Las Vegas/Bishop Gorman), one of the more intriguing defensive athletes in the region for his class.

Moss, a 6-foot-5, 200-pound prospect has played the past few seasons at safety, but has moved closer to the line of scrimmage as his frame has filled out. Now, he looks like a perfect fit as an outside linebacker in a 3-4 defense, which is needed in Todd Orlando’s scheme.

“I combine speed, strength, explosiveness, and length,” Moss said of his strengths on the field. “Then, I combine that with things like football IQ and film study. I am still working on increasing all of those things, of course. So I am building up the best I can to play either as a 3-4 OLB or something similar, which I could see as a great fit in Orlando’s and other systems across the country.”

Moss said he’s visited USC a few times while he was in middle school, but his first interaction with the Trojans’ new defensive staff came on his phone call with Orlando, when the offer was extended.

“I’m excited about it because of the seemingly great fit into the scheme,” Moss said of the USC offer. “Coach [Orlando] pressed that I would be playing very similar to how I am now. He also pressed on the fact that he had multiple draft picks from my position each of the last years he has had it.”

Moss is heading into his junior season, so there is plenty of time left in his recruiting process, though he said he would like to make a commitment before his senior season begins. He holds offers from Arizona State, Boise State, Cal, Colorado, Nebraska, Notre Dame, Oklahoma, Texas A&M, Utah and others. The Trojans could ultimately be a player for Moss among that group.

“I think USC has great tradition,” Moss said. “They have sent a lot of guys to the NFL. I think they are taking great steps this year and I’m interested to see how it pans out. So far I am still taking every offer in equally.”

Moss has no set plans or timeframe to list his top schools, but said that will come “when the time feels right.” Since he’s been able to visit some schools close to home, he specifically said he’d like to visit Oregon and Washington and other schools farther away.

Trojans in top-6 for Brown

Running back is going to be a very important position for USC in this 2021 recruiting class, as the Trojans missed at the position in the 2020 class and will lose two senior co-starters in Stephen Carr and Vavae Malepeai at the end of this season. It would make sense for USC to go after multiple backs in this class, and to make sure they are capable of seeing the field early, as they could be called upon quickly in their USC careers.

The 5-foot-11, 180-pound speed back listed USC among some of the Trojans’ familiar recruiting foes, in Michigan, Nebraska, Notre Dame, Oklahoma and Oregon.

Brown rushed for 779 yards with a 12.2 yards per carry average in 2019, on his way to 11 touchdowns. He also caught 17 passes for 343 yards and five more scores. On defense, he had 17 tackles and intercepted three passes. He returned one of those interceptions for a touchdown and added another score in a kickoff return.

USC offensive coordinator Graham Harrell clearly wants running backs who can be weapons out of the backfield, and Brown fits that description.

Just in case you missed Greg Katz’ O/NSO column this week about USC’s rivalry with Oklahoma, the USC coaches apparently were making sure you were still covered, as the Trojans went into Oklahoma to offer three Sooner leans this week.

The Trojans offered 2021 safety Kendal Daniels (Beggs, Ok/Beggs), as well as 2022 athlete Gentry Williams (Tulsa, Ok/Booker T. Washington) and 2022 cornerback Maurion Horn (Broken Arrow, Ok/Broken Arrow). All three look as though they’ll be difficult to pull away from the in-state Sooners, but USC cornerbacks coach Donte Williams has said he won’t shy away from any recruiting battles for players he wants.

USC running backs coach is very familiar with Texas, having played high school and college football in the state, as well as coaching Texas high school football from 1996-2012 before joining the Texas Tech staff through 2015.

So he isn’t shy about heading into the Lone Star State looking for running back talent.

He has another target on his radar now, as USC offered Jaydon Blue (Houston/Klein Cain). The 5-foot-9, 192-pound back already holds offers from Georgia, LSU, Texas and others, so this will be a true battle if USC really wants to get involved.