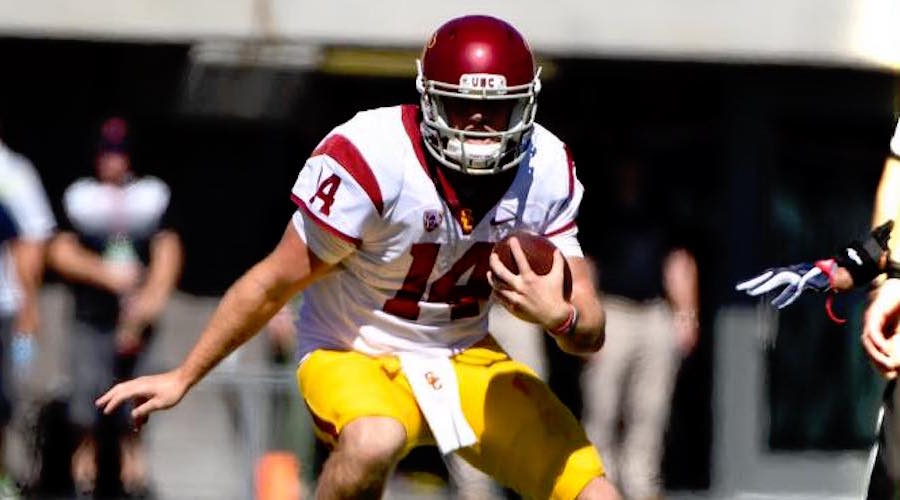 There are a lot of expectations for the 2017 Trojans coming off a dramatic Rose Bowl win and projections of a pre-season top 5 ranking and Heisman Trophy candidate at quarterback, but before any of that can happen there will be spring balls drills taking place this week and running through the middle of April.

This will be the second spring ball session of the Clay Helton tenure and it’s been quite a year for Helton and his program. The pendulum swung from one end in Dallas to the other in Pasadena, and in between we saw growth from both the players and coaches to the point where the Trojans were considered one of the top teams in the nation by the end of the year.

Now comes time for Helton to put some tweaks on a team that returns 14 starters, including a quarterback in Sam Darnold that will give him an opportunity get even more creative with his offense.

Darnold is back and let’s be honest, would you trade him for any other football player in the country? My answer is no, and I’m assuming many others reading this feel the same way. It will be such a comforting feeling to look out on the practice field this spring and watch #14 doing his thing, and it certainly has to be exciting for the coaches as well to see where things can go with Darnold in control for a second year. One of the more interesting position battles of spring could go on behind Darnold, with the presence of Matt Fink (who redshirted last year) and early enrollee Jack Sears (who won a state title at Darnold’s high school).

Ronald Jones returns as a 1,000-yard rusher who brings an explosive element to the Trojan run game. Aca’Cedric Ware has been limited during his first two years but when given a chance he has shown that he can add a physical dimension. Ware will get the opportunity this spring to be the complement to Jones and the speedy Dominic Davis is also available if they can find a way to get him the ball. It will also be interesting to see what Vavae Malepeai is able to do in spring because he was effective as a redshirt last fall once he returned from a shoulder injury. Reuben Peters is available as a fullback option.

There is a lot of opportunity this spring at the receiver spot as the departure of JuJu Smith-Schuster and Darreus Rogers means that both outside starting spots are available. You have to figure Michael Pittman is in line to get one spot based upon his solid contributions last fall as a true freshman, but two other players who redshirted last year will also be available in Josh Imatorbhebhe and Tyler Vaughns, and both of them are eager to show what they can do. Then there is Jalen Greene in a full-time receiver role, who can see time either outside or in the slot. Deontay Burnett returns in the slot and he tied for 2nd on the team in catches last fall in addition to his starring role in the Rose Bowl. Steven Mitchell is coming off an injury so it’s unclear how much he might be able to go in spring, while Trevon Sidney and Velus Jones are a pair of speedy slot guys who redshirted last year.

Don’t be surprised if Daniel Imatorbhebhe not only emerges as the starter at tight end but also as one of the leaders of the offense. It will be interesting to see what happens in the rotation because Tyler Petite is a veteran but he had dependability issues with pass catching while Cary Angeline was impressing onlookers and earning service team player of the year as a redshirt.

With the need to replace three starters this might be the position group under the biggest microscope in spring. There is also the fact that Toa Lobendahn, who figures to start somewhere along the line, will not be available for spring due to rehab from knee surgery. What we do know is that Viane Talamaivao is back for his fourth year as a starter, and Nico Falah will be back for his second year at center. Chuma Edoga is expected to get the first shot at left tackle and he has started on both the left and right side in his career. This is a huge opportunity for Chuma to solidify a spot heading into fall camp. Chris Brown battled with Damien Mama right up until the season opener at left guard and he will be the likely starter there. Right tackle could feature guys like Clayton Johnston, Roy Hemsley and Jordan Austin, or we could even see Brown get some time there. There have been rumblings about the possibility of E.J. Price returning to the team since he is enrolled at USC for the spring semester, but Price is not listed on the spring roster.

There is a lot of returning talent on the line but there is also once again a big hole to fill at nose tackle after the departure of Stevie Tu’ikolovatu, and that will be one of the more closely watched positions of spring. The options will include Kenny Bigelow as he comes off a second knee surgery, Josh Fatu showed well in limited action last season, Jacob Daniel, Malik Dorton and possibly even a look at early entry freshman Marlon Tuipulotu. Whoever ends up at nose he will have the talented Rasheem Green lining up next to him, along with reserves such as Christian Rector and Liam Jimmons.

Cameron Smith returns as the two-time leader in tackles for the Trojans, a dependable presence in the middle of the defense. There is a need to replace Michael Hutchings in the line-up next to him, and it will likely be a competition between Jordan Iosefa and John Houston, with early enrollee Tayler Katoa potentially in that mix as well. Iosefa is a hitter but I’m anxious to see where Houston is at now that he’s completely healthy. If you’re looking for a walk-on who could earn some time keep an eye on Grant Moore, he could fill in at either inside spot. At outside linebacker, Uchenna Nwosu and Porter Gustin return as the starters along with a group of reserves that includes Oluwole Betiku, Connor Murphy and Olajuwon Tucker.

Yes, the Trojans must replace a Thorpe Award winner in Adoree’ Jackson (along with Leon McQuay, who saved the biggest play of his USC career for his last) but there is a very good mix of veteran talent and newcomers ready to step in, to the point where the secondary should be a strength of the defense. Iman Marshall returns at one corner spot and he has developed into a very effective physical corner heading into his third year as a starter. It remains to be seen who will replace Jackson and who will be in the slot but the deep group of candidates include Ajene Harris, Jonathan Lockett and Jackie Jones along with Isaiah Langley and Keyshawn Young. Marvell Tell returns at one safety spot while Chris Hawkins will likely move into a full-time role, that’s a solid pair of veterans right there. Behind them will be John Plattenburg, Matt Lopes, Ykili Ross, C.J. Pollard and Jamel Cook, a talented hitter who redshirted last year with a foot injury and is finally healthy to show what he can do.

Chris Tilbey returns as the punter, with early enrollee Damon Johnson taking over long snapper duties. The kick return and punt return jobs are both open with the departure of Adoree’, some names we’ve seen work on return drills in the past include Jackie Jones, Deontay Burnett, Steven Mitchell, Michael Pittman, Dominic Davis, Ajene Harris, Trevon Sidney and Velus Jones. One name not on the spring roster due to a student conduct issue is placekicker Matt Boermeester, who made the game-winning field goal in the Rose Bowl as time expired. Michael Brown will handle placekicking duties in spring.

Clay Helton is riding a momentum wave as the Trojans enter spring ball and he does it with almost the entire staff returning from last year. The only departure was Tommie Robinson (who headed to LSU) and he was replaced with Deland McCullough, who put together an impressive stretch of production by the backs in his six years at Indiana, and who Helton described as “a teacher”. That style should fit in just fine with the rest of the staff. Tee Martin (also wide receivers) and Clancy Pendergast (also inside linebackers) are back as the coordinators, and John Baxter once again will head up special teams (and coach tight ends). Tyson Helton will handle quarterbacks and Neil Callaway is in charge of the offensive line. Kenechi Udeze (defensive line), Johnny Nansen (outside linebackers) and Ronnie Bradford (secondary) all return on the defensive side of the ball.