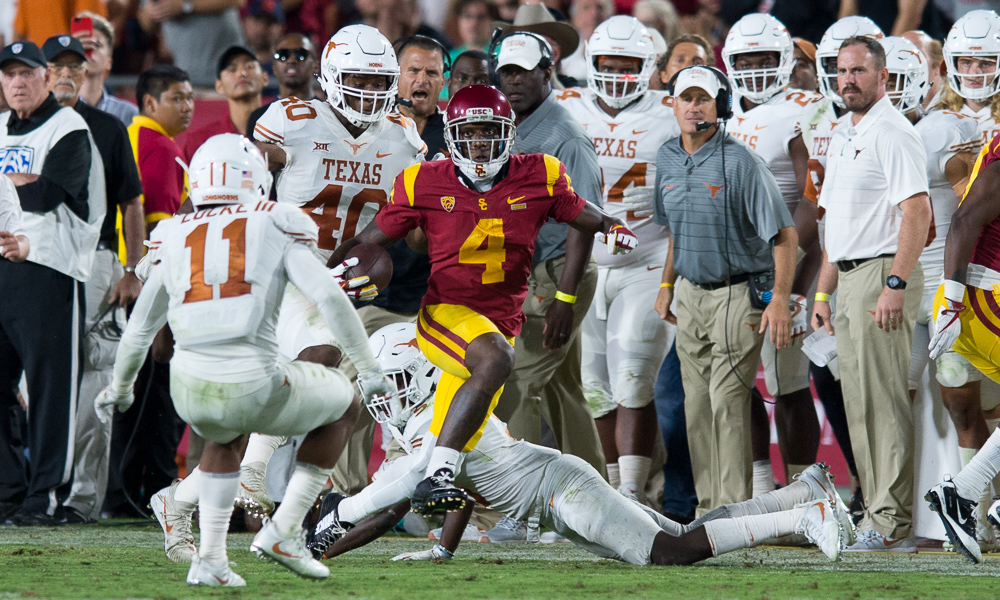 Garry, I sense that I am more optimistic than most on the board. I am thrilled that we are 3-0 and am still impressed by the last two wins. I believe Stanford will rebound to contend in the Pac 12 North, and I really think that Texas could win 8+ games in the Big 12 – it’s clear they are extremely talented. I also believe that a few of our glaring issues so far (e.g., WR play and excessive drops) should work themselves out over the course of the season. Barring extended injury absences for Gustin, Green, Edoga and Imatorbhebhe (all critical to our success), I really do think we’ll evolve into a Top 4 team and win the conference. Do you agree, or am I overly optimistic?

I do agree. I like a lot of what I see so far from a team that has found a way to be 3-0, and I’m very much looking forward to seeing how they develop even more as the season goes along. In hindsight, I look at the first three SC games as something that should prepare us well for the remainder of the year, moreso than expected.

Garry, Why does Tee stay back in the shotgun for third or fourth down and short yardage? I just think we are better served with the QB under center in those situations. What say you?

I think there are times when having the QB under center is a good thing, and there was a great example on 4th and 1 for the Trojans on the 2nd series against Texas to put 6-4 Sam Darnold under center and let him do a Bush Push type sneak. One caveat is that it’s not practiced much, and that’s a delicate time to do it if the center isn’t used to it, if the exchanged hasn’t been worked on, etc.

On one of the morning sports shows the host and guest made a point that SC does not have a deep threat that can help open up the middle of the field. Are they correct? If so is there any of the receivers that can fill that roll?

I think Velus Jones would offer that best option right now. He might be the fastest on the team behind Jackie Jones, and I think Velus could be finding a role as the kickoff returner. Joseph Lewis is another guy with surprising speed for a guy his size, and I still think Pittman and Vaughns have some skill in that area as well.

Why didn’t they try Jamal Cooks who’s 6’4″ cover texas 6’6″ we? Levi Jones looked fast when he blitzed when Cameron Smith went out with his injured finger, any chance they play them together at ilb?

I had that same thought too regarding Cook going up against Collin Johnson. So far there hasn’t been much rotation at the corner spot, Isaiah Langley is one who could get more time and I’m interested to see what happens when Cook does eventually play, I understand he is still transitioning to a new position as far as footwork is concerned but there are a lot of physical traits in his toolbox. As for Jones, I agree, I think he has a chance to be real good. He is lining up as the #2 WLB, which means if he got into the game at that position he would be lining up there next to Cam.


As previously stated it does not look like we have the type of wide receiver who can keep the safeties honest (who can take the lid off a defense). That being said I would like your opinions on our chances (Garry, Greg, Helix, and Johnny) of us getting Amon-Ra St. Brown and if you guys think he is that kind of a wide receiver with great speed? We know he has great ball skills. Also do you think he is a guy who could help us on our punt return unit as we need improvement here. Thanks for the great job Garry with WeAreSC! Fight On

I like our chances right now with Amon-Ra. The speed aspect of his game is good, and his ball skills as you mention, but the element that doesn’t get talked about much is how strong he is. His dad (a former Mr. Universe) has trained him well from a power perspective and Amon-Ra uses that strength well against opposing DB’s.

Our OL also had a tough time because Texas had a big, strong trio in the middle of their d-line, let’s give credit for that. But I agree that some misdirection and counters would have been a nice touch to help catch them off guard. At the end of the day, however, Coach Callaway didn’t think it was a matter of play calling, he thought his group needed to play a lot better, and he let them know that this week in practice.

Garry,
I think they are underutilizing Carr. He’s too good a pass catcher to only have a few balls thrown at him per game. I see him being used the way the Rams used Marshall Faulk. Sometimes the Rams would even line him up as a WR to get him the ball in space. Stanford did something similar with McCaffrey. Do you think Carr’s touches go up this week?

Yes I do. There is a chance he could end up with more carries if RoJo cannot go but there is also the possibility to utilize him more as a pass-catching option because he’s clearly earning the trust of the coaches to put the ball in his hands. I thought it spoke volumes on the final series in regulation against Texas on his big pass catch over the middle, that play originally had Velus Jones in that spot, but when Texas called a timeout we put Carr in place of Velus, and the ball was thrown his way. That’s huge faith to go to him in that situation.

So far, Cal looks like world beaters. Are they that good? How do we match up? I also see where they are a 2nd half team. And of course, we now consider ourselves a 2nd half team. So, something has to give. Which team will give?

I think we match up very well. I’ll give the Bears credit for being 3-0, especially since they are using players that were brought in for the Air Raid system from the Sonny Dykes era, but in the end I think the Trojans will have too much talent.

If a scholarship is available it can be given at any time, but it’s not clear what the status is. Based on what we know there are 84 scholarships currently being used, which would indicate an open spot, but Helton gave this quote about McGrath and a scholarship in an ESPN story, ““I need to find one. I can tell you that,” USC coach Clay Helton said.

Garry, Darnold appears to be a very humble quiet type person during his TV interviews. Is he different away from the camera. Thanks

No, he’s not different away from the camera, he’s about as good of a representative as you could hope to have as the face of the program. Jim Hardy was at practice yesterday and he made a comment about Sam, “he’s one of the guys”. There aren’t too many things you can say better about a high-profile quarterback, because not all of them are one of the guys.

I noticed we use Velus as decoy on some of the running plays. This would be more effective if he actually runs the reverse once in a while. Do they practice him running a reverse? Hopefully we see it soon in a game (maybe save it for ND).

One of the restrictions Helton puts on us is to not talk about plays that we see in practice but haven’t been used in a game. Hope you understand.

From my perspective, Steven Mitchell has been a fantastic surprise this year. I thought that Pittman and Vaughns would pass him by this year, but he looked downright explosive on some of his catches on Saturday and has contributed significantly every game. Would you say that physically he is fully recovered? Mentally, he’s playing so much stronger than ever—running clean routes, blocking incredibly well, not making the mistakes he used to make. What’s your take?

I’m so pleased for Steven has been able to come back at this level for what we’ve seen through the first three games. There was a point early in fall camp where it wasn’t looking good on his return from the knee injury to make it back as a starter but then things changed and he’s been playing well. I don’t know if he’s all the way back to what he was, he had a gear before the injuries that few players have, but he’s making up for any missing burst with the experience that comes with being a fifth-year senior.

Garry…..without trying to be offensive, does the cash donated to this site go to some corporate balance sheet somewhere or do the people responsible for providing this fine free content, like yourself , Johnny etc, benefit from it. I’am debating a contribution but only if the folks that actually provide the content benefit from at least some portion of the funds.

There are no corporate partners and no ESPN or recruiting network ties. When we left ESPN we were committed to having the site operated by Trojans, and for Trojans. We appreciate the support.

If you could pick one player — from each side of the ball — to see receive or earn more playing time, who would it be?

I’ll put Aca’Cedric Ware on offense. He’s good enough to play a much bigger role but right now the touches are limited due to the success of RoJo and Carr. If the opportunity arises where we should need Ware to play more I think he would do just fine. On defense, my answer last week would have been Christian Rector and we saw what happened when he was called upon, he really stepped up against the Horns. I’ve got no problem seeing Christian’s role increase because I don’t think it was a fluke.