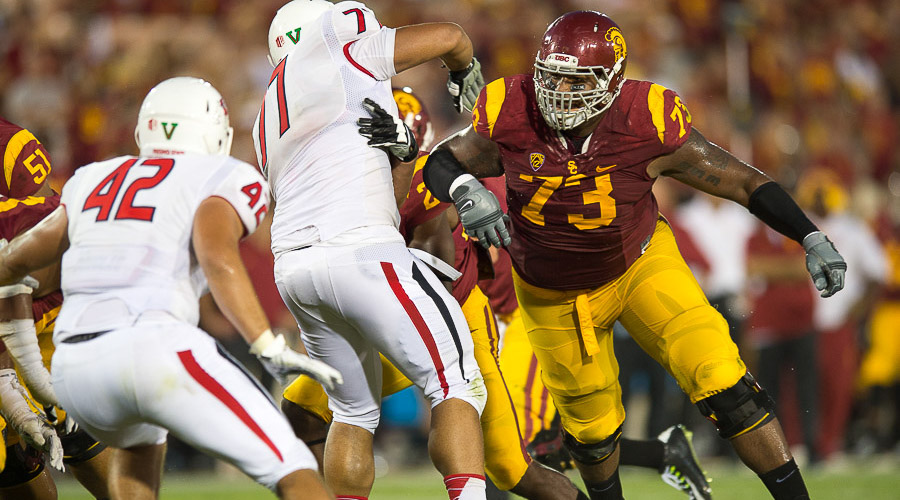 Zach, it was the opening game of the season Saturday, at home, how did it feel to be back in the Coliseum?

It felt good. I love playing in front of the fans. When I first committed four years ago I kept it on the DL. I gave my verbal here. When I first got into the Coliseum I told Coach Kiffin I was coming here. That Coliseum is a whole different thing. I came here ’cause of that shift.

You’re a junior now, you are a leader on the team. Does it feel any different now for you from that perspective of being a leader?

How did you like the rotating system on the O-Line, regularly subbing guys in and out? Do you think it helped the unit stay rested and play better?

Yeah I felt refreshed. You know, Coach Sark wants to do the platoon thing and I do whatever Coach wants to do. It’s a good system. We got to be ready, you now what I mean? If he doesn’t sub us out then we gotta be ready to go. We can’t be out of shape so that’s why we’re doing certain stuff during practice and going really hard on Tuesdays and Wednesdays.

You got a new offensive line coach earlier this year. How are you liking Coach Connelly?

He’s the best offensive line Coach I’ve ever had, and I mean that. I don’t just say that ’cause he’s my boss. I’ve had four offensive line coaches in the past four years and he is the best. Definitely. He is here to stay.

What makes Coach Connelly the “best” offensive line coach you have ever had?

Certain technical things, his want to dominate, and his want to finish. For us older guys he’s probably on our butts even more. Worse than the young guys ’cause he holds us to a standard just like I was telling you earlier. We got to set an example for the young guys and I really like that. He doesn’t settle.

Against Arkansas State the first half five sacks but you obviously turned it around, second half zero. What are you doing to make sure you continue to protect Cody Kessler as much as possible?

You know how when you’re a kid and you forget to take out the trash when you’re parents tell you? Or when you’re in school you forget to do your homework sometimes when your teacher tells you? People make mistakes. The second half, we came out and we fixed things. We didn’t let up once. We didn’t settle for that. We’re not okay with us giving up five sacks. We learn from our mistakes and we hope to learn from them.

You are 43 point favorites against Idaho.  What are you doing to make sure you don’t overlook them with Stanford looming the following week?

You know, the most unathletic people in the world set those 43 point standards, you know what I mean?  Right now I don’t even know who Stanford is, I only who Idaho is right now.