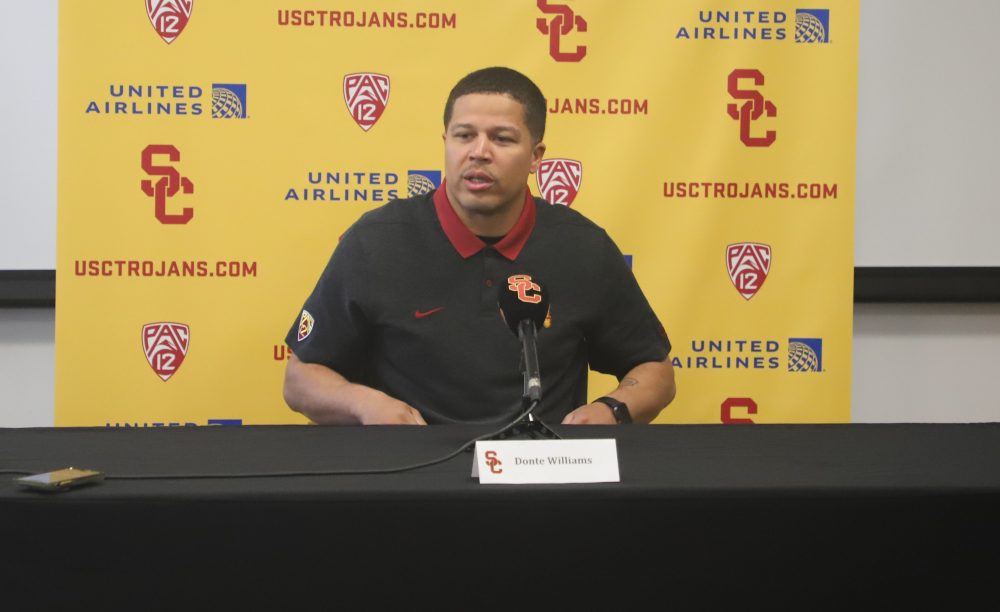 New USC cornerbacks coach Donte Williams probably won’t like the title of this story. He isn’t at USC to mimic anybody else and directly stated on Tuesday that USC is going to be the trendsetter in all aspects moving forward. But it feels appropriate, considering what’s transpired on social media since he’s arrived at USC and what we heard from Williams and the entire Trojans’ defensive staff during their introductory press conferences.

With regard to the title, you certainly may know it as a reference to Arizona State head coach Herman Edwards’ emphatic statement while he was head coach of the New York Jets: “You play. To win. The game.”

Now, the Arizona State staff and new-look USC staff have butted heads a bit on social media. Williams brought with him a “Take back the West” slogan, as USC has fallen behind Pac-12 programs such as Arizona State, Oregon and Washington on the recruiting trail and top California prospects are fleeing the state for national powers across the country. Arizona State jumped on that motto, proudly showcasing that they were considered the kings of California recruiting in this past cycle, signing more top players from the state than any other program.

Williams smiled on Tuesday, when asked about the back and forth with Arizona State coaches Chris Hawkins and Prentice Gill.

“I love those guys,” Williams said. “I see myself in them. That’s me, just 10 years ago. At the same time, old dog still has a few tricks up his sleeve.”

Williams smiled at the end of that, but recruiting is no laughing matter to the reigning Pac-12 recruiter of the year. And judging from Williams’ comments, as well as those from the rest of the defensive staff, things are about to get a whole lot more serious from USC on the recruiting trail.

All the coaches talked about recruiting as a group and making sure that prospects knew USC as a whole was coming after them–not that just one coach was recruiting them. But the entire charge is likely to be led by Williams, who knows this region extremely well after serving as a recruiting force for Washington, Arizona and Oregon in previous Pac-12 stops.

He then added, “But at the same time, we have a lot of great coaches here and we have a lot of great recruiters here, so that’s not just, ‘Can we impact USC recruiting?’ We’re going to impact it all together. We’re going to do everything as a team, as a group effort. So it’s not just me by myself. It’s us. It’s we. I think together, we’ll be able to accomplish great things.”

At premier programs, great things on the field often start with great recruiting results off of it. The Trojans had a small class in 2020, but finishing No. 10 in the Pac-12 and No. 55 nationally is outside the realm of what was thought possible at a place like USC.

Defensive coordinator Todd Orlando is known as a solid recruiter, but even he takes a backseat to the all-star staff that is Williams, safeties coach Craig Naivar and defensive line coach Vic So’oto.

Where in the past, USC seemed to turn the volume knob up and down throughout the year on just how much emphasis they put on recruiting, this staff appears to want to turn the knob all the way up and break it off.

As was the case when athletic director Mike Bohn held his introductory press conference and mentioned recruiting several times as an extremely important component of what he’s looking for during his time at USC, every member of this defensive staff spoke at length about the importance of recruiting.

“You take this area right now and draw a ring around an hour radius, maybe two-hour radius, and you keep the best players and get them to come here, you’re going to be in great shape,” Orlando said. “That was really, really important to us that we put that together [a staff at the] top of their field, but more importantly, recruiters, and then alpha dogs too.”

Naivar perhaps summed it up best when he said, “Recruiting is like shaving. If you don’t do it daily, you look like crap.

“It is an ongoing, daily deal,” he continued. “You can’t just rely on the brand to go out and recruit. You’ve got to build relationships and it takes a village. It’s their families, coaches, associations. Who’s the champion for that young man in the home, outside the home? All that stuff. Establishing that. And, recruiting as a staff. It’s not just one guy recruiting a certain player. It’s four to five to six guys in constant communication with that young man and his family to where he feels like USC is recruiting me, not just a particular guy. So in previous places we’ve been, we’ve attacked it that way and had success with it.”

So’oto doesn’t have the established reputation of Williams, especially out in this region, but he worked wonders in a few short years at Virginia, turning the Cavaliers’ defensive line into the strength of the team, and getting Virginia involved with some of the top defensive linemen in the country.

“My whole thought process with recruiting is to be honest and be up front, and develop relationships, then get after it,” So’oto said. “Tell them, ‘You’re going to be pushed harder than you’ve ever been pushed. I’m going to be honest with you. But at the end of the day, you’re going to know my kids’ names, they’re going to wear your jerseys. We’re going to be family and this thing will go on past playing.'”

Williams laid out his recruiting plan as a three-pronged attack, pushing USC’s education, then athletics, then social life, with USC’s vast and connected alumni base. But he also said recruiting comes down to two things.

What will be important to watch is where USC goes from here. The Trojans have immediately jumped into the mix for a number of big-time prospects since this staff was hired, and it’s clear from Williams and the staff that they aren’t going to get outworked for any recruit. But Williams also offered a glimpse into the future, and how USC is setting itself up to stick with the premiere recruiting programs, such as Alabama, Georgia and Clemson.

Williams said the new administration has been fully supportive, sinking the necessary resources into recruiting with the game’s best, “but at the same time,” he said, “recruiting is just like everything else in life. Everybody is trying to keep up with the Joneses. So you can do everything possible to think you’ve caught up with everybody today, but tomorrow there’s five schools that did something new and added to their budget. So it’s a revolving door. It never stops. So just because you’re willing to do everything to keep up with somebody today, next week it completely changes.”

Williams echoed several of the other coaches’ thoughts about the importance of recruiting as a complete staff, and how much that benefits the operation in making a recruit feel wanted and have a full understanding of how he fits into the team, the defense and the entire program. And while Williams was likely speaking about the product he planned to help put on the field while at USC, there was plenty about one of his thoughts that could be carried over to the recruiting battleground as well.

“I didn’t really come here to be liked,” Williams said. “I came here to make sure that we’re respected and we’re feared.”