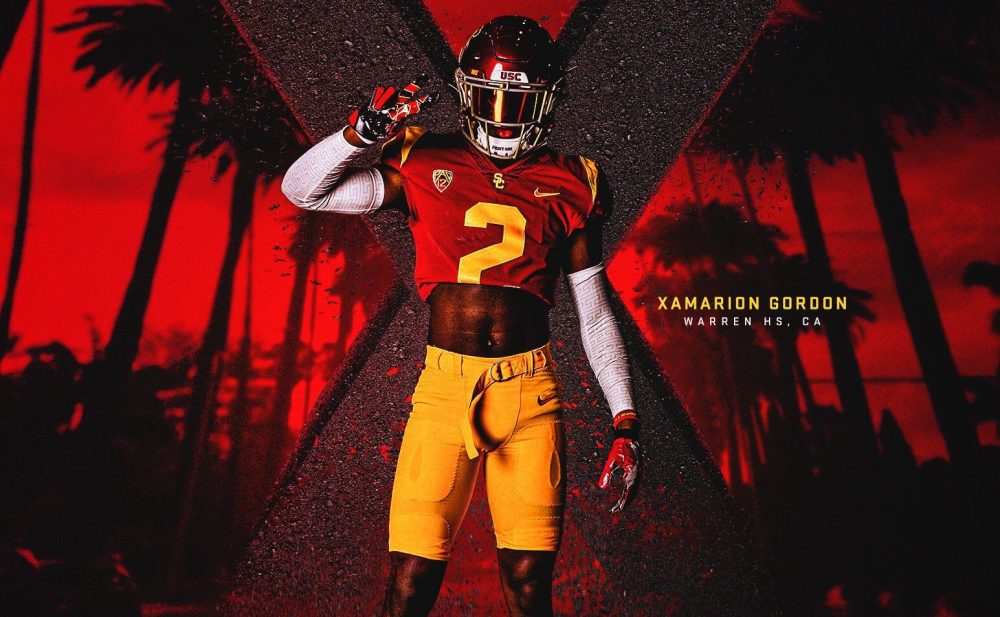 As a result of Monday’s announcement by the California Interscholastic Federation to postpone high school sports in the state until December, USC fans might have seen the last of the high school careers of several Trojan commitments in the 2021 class.

One of those looks to be four-star safety Xamarion Gordon (Downey, Calif./Warren), who took to Twitter on Monday to announce that he’ll be enrolling early at USC rather than taking part in his senior season, which would kick off with practices in mid-December and games in early January.

Gordon won’t be the only 2021 prospect to make this decision, and he likely won’t be the only USC commit to do it. Fellow four-star safety Anthony Beavers (Harbor City, Calif./Narbonne) made a comment shortly after the CIF announcement that implies he could take the same path.

USC quarterback commitment Miller Moss (Santa Ana, Calif./Mater Dei) made the decision to transfer from Mission Hills (Calif.) Alemany to Mater Dei this offseason, in large part with the hope of preparing himself the best he could for the next level. Instead, he’s unlikely to get that opportunity and could miss out on a year’s worth of valuable reps.

Moss is an early enrollee and actually had discussed at one point reclassifying to the 2020 class and heading to USC this fall. So, the idea of sticking around in high school through the spring and enrolling in the summer would seem unlikely for Moss, who let his feelings be known following the decision to delay the season.

Gordon will be a major addition in 2021 to a USC secondary that could lose Talanoa Hufanga early to the NFL Draft and lacks experienced depth at both safety positions. While the Trojans loaded up on defensive backs in the 2019 class, both Jayden Williams and Dorian Hewett–regarded as safety prospects in high school–have moved out to cornerback, leading Briton Allen and Kaulana Makaula as the only safeties from a group that also included cornerbacks Chris Steele, Adonis Otey and Max Williams. And Makaula played nickelback as a true freshman.

Without football on the schedule this fall, it will be interesting to see what these high school seniors do to prepare themselves for enrolling early at USC. It should also make things interesting for those first few games in January. If the recruiting calendar remains unchanged, signing day would hit at the beginning of the season, giving schools just a few opportunities to find any late bloomers or make calls on players they wanted to see develop in their senior seasons.

This won’t affect the players high on USC’s recruiting board or already committed to the Trojans, as they’ve proven enough over their first three seasons and off-seasons to warrant multiple offers. But every year there are a number of recruits who blossom between their junior and senior seasons and become major Pac-12 targets. They could have more opportunities to make an impact if those four and five-star early enrollees are already on college campuses, but will there be enough time for college coaches to properly evaluate and make decisions on extending scholarships?

And of course, this all depends on the college football calendar remaining on schedule.

As of now, the Pac-12 is set to play a conference-only schedule that could begin in late-September. But clearly options remain open to move it more if needed. The Southwestern Athletic Conference provided a bit of a blueprint on Monday if that becomes the call for other conferences, as the SWAC announced it will begin football in January with an eight-week training period followed by six conference games and a potential non-conference game.

Going that route would likely have a major impact on the recruiting calendar, as the NCAA or the Pac-12 conference would need to find solutions regarding signing day, early enrollees, spring ball and anything else that might be impacted.