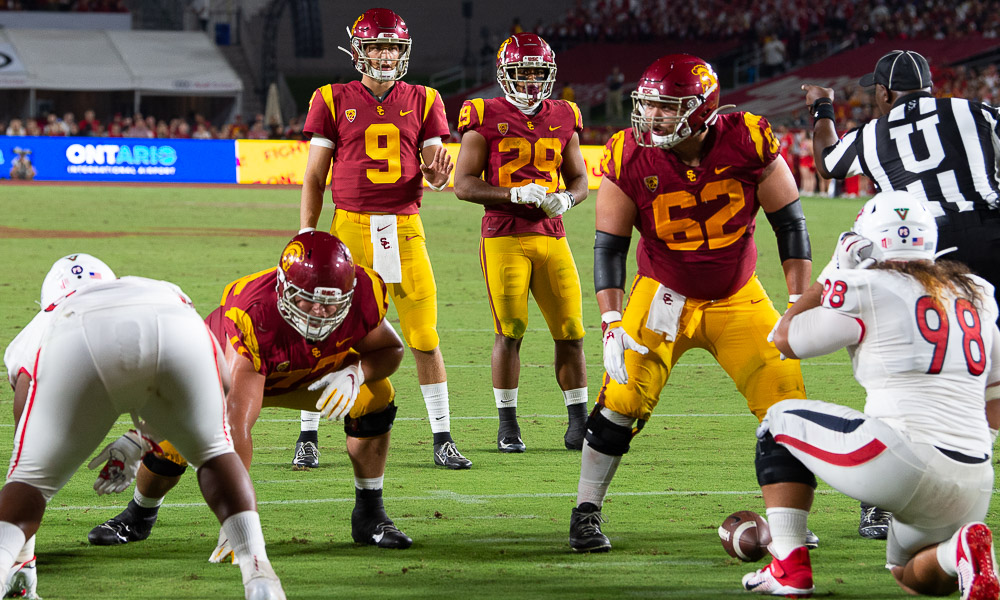 The atypical offseason continues, but there was plenty of news this past week relating to college football and the USC Trojans. We’ll run through it all here.

The week kicked off with the Pac-12 Player Unity Group announcing demands of the conference related to health and safety protocols, protecting all sports, addressing racial injustice and economic matters.

The group initially did not have a player from USC represented among the named leaders, though defensive back Chase Williams added his name during the week.

The group earned a meeting with Pac-12 commissioner Larry Scott, which–according to Jon Wilner of The Mercury News–focused primarily on the health and safety issues raised by the group.

The initial demands came with the threat of a boycott from players and it will be interesting to see if it comes to that as long as the two sides are continuing their discussion. Several Pac-12 players have voiced their support for the movement, but have said specifically that they will not sit out the season.

Since the Pac-12 players stepped forward, both the Big Ten and Mountain West conferences have delivered similar statements, though both focused solely on issues around Covid-19 testing and safety, and the fallout of a player choosing to sit out this season due to those concerns.

We’ve seen instances where a player will sit out a season following a very early injury, as the decision becomes about taking the recovery period slowly and preparing for the following spring’s NFL Draft, rather than rushing a return to the field.

This season, we’re seeing players opt out entirely, as concerns over coronavirus and the safety of playing a fall football season have led to decisions to sit out the season. Those decisions have come from young role players all the way up to some of the biggest names in the sport.

Purdue’s Rondale Moore, Virginia Tech’s Caleb Farley, Miami’s Greg Rousseau, Minnesota’s Rashod Bateman and Penn State’s Micah Parsons are all likely first-round picks in next year’s draft who won’t be playing this fall. Maryland will be without at least three players, including its starting quarterback. And North Carolina will be without at least three members of its defensive secondary.

To this point, no USC players have announced a decision to sit out the fall season.

With an eye on that fall season, MaxPreps this week took a look around the country at some of the top players and coaches.

In its list of best players in each state, California’s choice was unsurprisingly defensive end Korey Foreman (Corona, Calif./Centennial), the nation’s No. 1 prospect in the 2021 class. He is the top target on the defensive side of the ball for USC in this class.

Of the 2021 prospects named, USC is likely in the mix for just one other, as offensive tackle Kingsley Suamataia (Orem, Utah/Orem) took top honors in Utah. Defensive tackles Maason Smith (Houma, La./Terrebonne) and Tywone Malone (Oradell, NJ/Bergen Catholic) are longshots, but the Trojans have been chasing them.

Several of USC targets in the 2022 class were named, as linebacker Cyrus Moss (Las Vegas/Nevada) and athletes Gavin Sawchuk (Highlands Ranch, Colo./Valor Christian) and Dasan McCullough (Overland Park, Kan./Blue Valley North) will be two of the top prospects in their class. McCullough is the son of former USC running backs coach Deland McCullough, now with the Kansas City Chiefs.

And MaxPreps also looked at its top 50 offensive and top 50 defensive players to watch this fall from the Class of 2021. Though, they limited it to players who will be playing in the fall, which eliminated a dozen states–including California–that have moved the high school football season back to January.

No USC commits made the defensive list–defensive lineman Colin Mobley (Hyattsville, Md./DeMatha Catholic) was the only one eligible–while three USC commits, including two of USC’s three Texas commits, were named on the offensive side.

Running back Brandon Campbell (Katy, Tex./Katy) has a lot of people wondering what kind of senior season he can turn in for what should be a loaded program at Katy. He checked in at No. 36.

Wide receiver Quay Davis (Dallas/Skyline) is a big play waiting to happen and was listed at No. 34.

And all eyes will be on quarterback Jake Garcia (Valdosta, Ga./Valdosta) as he makes his way across the country to play his senior season in the south. He finished as the No. 7 quarterback and No. 21 player on the list.

Suamataia made another appearance here, as the No. 25 offensive prospect.

Former USC wide receiver JuJu Smith-Schuster has carried his larger than life personality with him into the NFL, as he has a constant presence outside of football. This week, he showed up alongside Suamataia, thanks to a Tik Tok duet video.

Oregon is going to be very difficult to beat for Suamataia, but USC will likely take any kind of help it can get in this recruiting race.

Trojans in the Top 25

The Coaches Poll was released this week and USC checked in at No. 17.

Oregon was the highest Pac-12 team at No. 9. The top five was Clemson, Ohio State, Alabama, Georgia and LSU. Notre Dame was No. 10. For the Pac-12, Utah was No. 20, while Arizona State, Washington, Washington State, Cal and Stanford all received votes.

USC reached as high as No. 23 in the Coaches Poll last season.

This week also offered a chance to see some familiar faces in new places, and new faces in familiar places.

And back at USC, the Trojans offensive line was on display this week.

Those linemen are, clockwise from the top left, Liam Douglass (and his mustache), Brett Neilon and incoming freshmen Jonah Monheim and Courtland Ford.

USC signed six offensive linemen in the 2020 recruiting class as the Trojans looked to build depth along the line. None should be needed this season, but if two are called upon, there is a good chance it could be these two, as Monheim was the lone four-star signee along the line, and Ford looks to be in terrific shape after pushing hard all offseason to be ready to come in and compete for playing time right away.