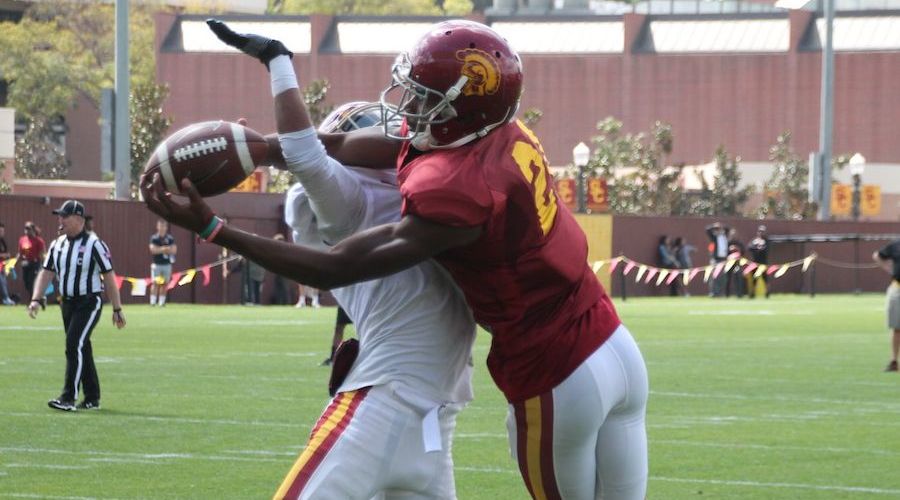 Early in USC football spring drills Clay Helton made a statement that the offense will go as far as the young receivers go, his point being that the Trojans needed to replace a lot of production at the position in order for the offense to function at a high level. All of the other skill players on the USC offense had experience returning from quarterback to tailback and tight end, even the slot receiver role, but in terms of the outside receiver spot there was simply a huge 126-catch hole with the departures of the #1 and #2 reception leaders from last year.

Fortunately, there were some pretty qualified candidates looking to step in. Michael Pittman was the only one of the freshman class last year who saw game action, while Tyler Vaughns (photo above) and Josh Imatorbhebhe were both redshirted and ready to show what they could do. On top of that you had a veteran in Jalen Greene who was finally settling in to a full-time role at receiver after coming to USC as a quarterback.

As spring drills come to a close it looks like the position is in good hands. Greene is certainly a dependable veteran option, and Imatorbhebhe flashed some good things in his limited time due to a sickness, but it was the performances from Pittman and Vaughns that really stood out. In fact, I could make the argument that they are the co-MVP’s of spring.

The thing that jumped out to me about the two of them all spring was how many plays they made. They were consistently productive, both of them, and that was a major point of emphasis from offensive coordinator Tee Martin.

“I really challenged them coming into spring about making us feel comfortable about putting the ball in the air and them making plays. Tyler and Mike, they’ve been phenomenal in that regard,” said Martin.

They both have really good size, Pittman is 6-4, 215 and more powerful, Vaughns is a lean 6-2, 185 but with long arms that really extend his catch radius. The surprising thing about Pittman is his speed, he is much faster than you think he’s going to be. With Vaughns, you just can’t help but notice that he catches everything. USC radio analyst John Jackson, who covered Vaughns in HS for the Fox game of the week, always said that Tyler thinks every ball in the air is his, and we’ve definitely seen that this spring.

“With Tyler, his situational awareness is pretty special,” said Martin. “I haven’t seen anyone with that ability to transition and move within routes without changing speed since Marqise Lee. And Michael, he’s one of the more physical, big, fast wideouts that we’ve had here in a while. To be his size, to run as fast he does, to play fast, it’s really unique.”

Pittman found a variety of ways to contribute last year as a true freshman not only on offense but on special teams as well. While appearing in all 13 games he had 6 catches for 82 yards (13.7 avg) on offense and had 2 punt returns for 63 yards (31.5 avg), 4 kickoff returns for 31 yards (7.8 avg), 7 tackles, a blocked punt and a forced fumble on special teams.

As a redshirt was sat out last season, Vaughns brought a noticeable attitude to spring drills, according to Martin.

“Tyler is hungry. He’s the guy that when no one else is around he’s still catching balls, watching film. He sent me a text the other day and he was by himself, working, asking me what he could do to get better. I like that. A guy who was one of the top, if not the top, wideout in the country and he was redshirted. If you’re a competitor you don’t like that and he came out with a chip on his shoulder this spring.”