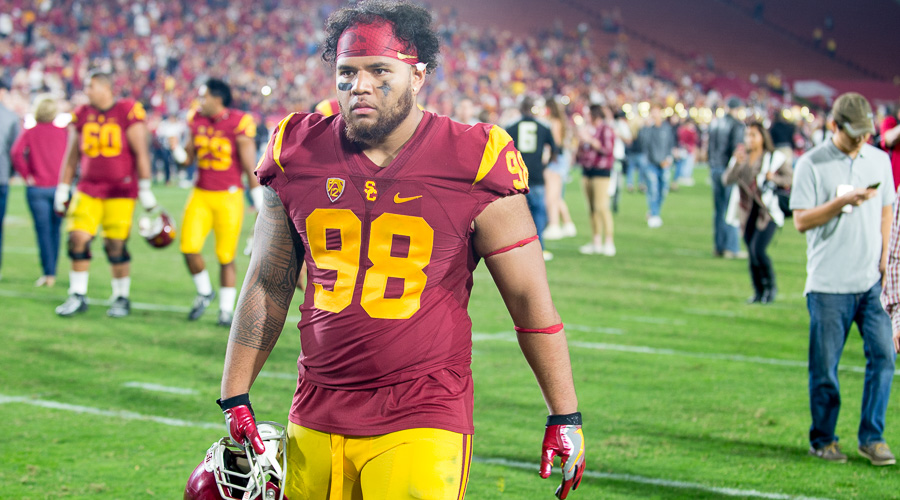 The news that Noah Jefferson will be transferring from USC does not, unfortunately, come as a surprise but it does present a finality that the talented defensive lineman will no longer be a part of the future Trojan d-line plans.

This is not a small issue as there was a point not too long ago where Jefferson was considered one of the linchpins of an interior group that he would lead along with Kenny Bigelow and Rasheem Green. Jefferson was uniquely athletic for a man with a 6-6, 315 frame and he entered spring ball last year as the projected starter at nose tackle after having 23 tackles as a true freshman. His spring was limited by back issues, he returned in time for the spring game but then suffered a hyperextended elbow and was forced to leave the game early.

The back problems extended into fall camp and he wasn’t able to do much, but he did make it back onto the field for the Alabama game and started at defensive end while notching 3 tackles. That was the last we saw of Noah in a USC uniform. There was a sprained shoulder, a trip home to Las Vegas with rumors of homesickness, and finally an announcement that he would be held out of team activities as Clay Helton said he would be focusing on academics.

The details of exactly why Jefferson was being held out, or when he would return, were pretty vague and there were was a lot of speculation about the possibility that he wouldn’t return. Jefferson wasn’t spotted at any recent USC practices or games, although he did put out this Twitter update on Saturday after the Trojan victory over Notre Dame.

Then came word this week that Jefferson would be transferring from USC. The reasons for the transfer haven’t been made clear yet but it does give another reminder that the transition to being a student-athlete at a university like USC is not always an easy one. We wish Noah well wherever he goes.

So what does this mean for the USC defensive line? Well, it didn’t catch the coaches off-guard, that’s for sure. They have been playing without Jefferson since September and they’ve adjusted to making do without him. Don’t get me wrong, it would have been nice to get him back because the Trojans need a run stuffer in the middle of the line to replace Stevie Tu’ikolovatu but the coaches knew the reality of Noah’s situation and they knew the possibility that he wouldn’t be back.

The good news is that we’ve seen a lot of development with the d-line under Kenechi Udeze and there are some clear options.

The first two players to get looks will likely be Josh Fatu (photo above) and Jacob Daniel. Fatu got some steady game action through the year (21 tackles) and even started against Arizona, he could offer an experienced senior presence. Daniel got increased time in the practice rotation toward the end of the year and he could be worth watching with continued teaching from Udeze.

Then there is the possibility of Kenny Bigelow. There’s no doubt about Kenny and his potential but with two knee surgeries in recent years you just don’t know how he will come back. If he comes back strong you could have a former 5-star recruit who is chomping at the bit to finally deliver on his promise, or it could be a case where the injuries just don’t allow him to return at that level. Kenny has been a fixture at practices while going through his rehab this fall and you can sense a real maturity about him these days, it would be such a bonus to get him back playing well.

Other who could be in the mix included Malik Dorton, Liam Jimmons, Christian Rector or Kevin Scott. Or we could always see the addition of a recruit (high school or JC) or a grad transfer, it certainly worked this past year with Stevie T.