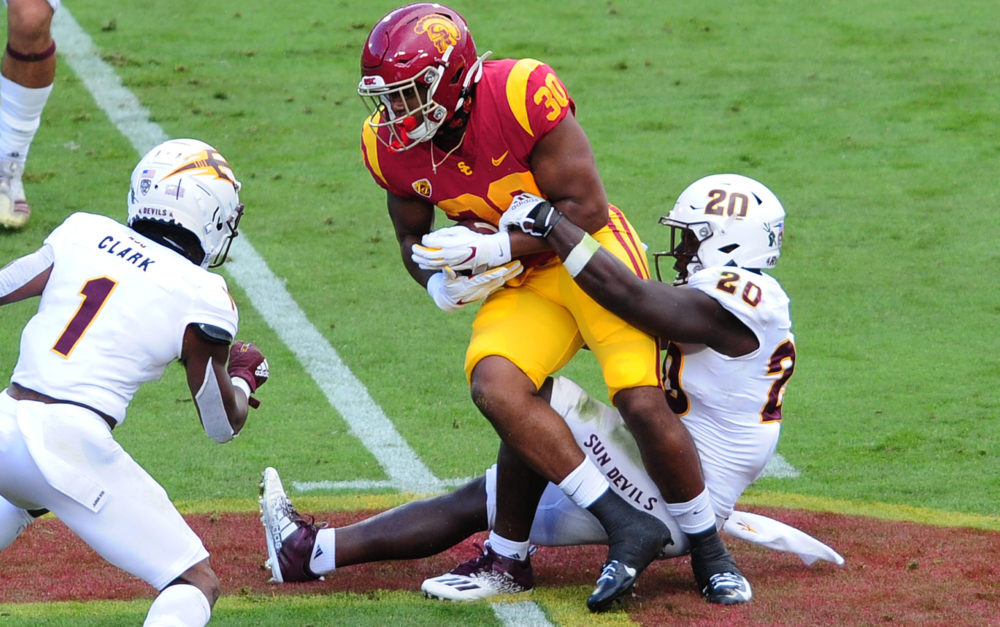 USC had an opportunity to ultimately celebrate a win against Arizona State this past weekend, but it’s clear that the same performance for the first 56 minutes of that game won’t result in many wins moving forward. USC head coach Clay Helton and offensive coordinator Graham Harrell said Tuesday morning that the Trojans could take a few positives from that game into this week and beyond, but the game against Arizona State also highlighted a few areas where improvement is quickly needed.

Because it was the offense’s day with the media on Tuesday, there wasn’t a lot of discussion about the defensive performance against Arizona State, but Helton was clear that there are some alarm bells going off over there with Arizona up next on the schedule.

“The biggest thing that we’re going to face this week, and we got hit for a big play in the Arizona State game, is making sure we control the perimeter,” Helton said.

Helton was referring to a play with five minutes remaining in the second quarter, where ASU quarterback Jayden Daniels sent running back Rachaad white in motion out of the backfield to the right, then faked a handoff to running back Chip Trayanum. Daniels then quickly turned and got the ball out to White, who caught the ball five yards behind the line of scrimmage and was squared up by safety Talanoa Hufanga a yard or so behind the line.

Cornerbacks coach Donte Williams spoke this fall about teaching tackling to his defensive backs and said if they’re going to miss a tackle, he wants them to miss it toward their leverage, making the ball carrier move back toward the defensive pursuit. In this case, Hufanga — one of the better tacklers in the USC defense — had Isaiah Pola-Mao and Palaie Gaoteote helping with pursuit from the inside, but allowed White to escape outside and down the sideline. Pola-Mao couldn’t get him down when they met along the sideline and White outran the rest of the USC defense to the endzone.

“One of our safeties was in perfect position and jumped in at the last second,” Helton said. “The ball got outside and it created an explosive play. It’s being real disciplined in our assignments, being able to force that ball back in, because this is a huge RPO team (Arizona) and as good as you’ll see in our league.”

Helton said the Wildcats will also stress the USC defense with pace, as the USC head coach said this will be “the fastest-paced team that we face all year.”

On the offensive side, there are a couple clear areas where USC needs to improve in a hurry. The Trojans weren’t able to finish drives as well as they needed to against Arizona State. That includes four turnovers — three of which happened in the red zone — and two additional turnovers on downs — one of which was deep inside the redzone. USC also needs to find a way to convert short-yardage opportunities, as the Trojans missed on a few third or fourt-and-short conversions.

After taking a 14-10 lead with 6:10 left in the first half, USC’s next six possessions resulted in a punt, interception, punt, fumble, downs and fumble. So with 4:28 remaining, USC’s got the ball, down 27-13. Offensive coordinator Graham Harrell was asked about the frustration level and what was causing it at that point.

“More than anything, just turning the football over,” Harrell said. “We gotta take care of the football…The thing I was most proud about what I don’t think there was any panic.

“I think that everyone at times was frustrated the other night, but there’s a difference between being frustrated and acting frustrated,” Harrell said. “To win a game like that — everyone knows we could have played a heck of a lot better. To still find a way to win I think one, that’s what good football teams do is find ways to win games that maybe you shouldn’t win. But the other thing is it motivates you that hey, we’ve got to get a lot better this week in practice.”

Harrell said it was the turnovers and the inability to convert short-yardage plays that the coaching staff stressed to the players as things that need to improve for this weekend’s game. But Harrell took some of the blame for the inability to pick up first downs on a couple of situations.

On the fourth-and-short in the redzone, Harrell said he didn’t give Jude Wolfe enough of a chance to get across the formation to cut off the Arizona State defender, who had come all the way up on the line of scrimmage and ultimately made the tackle in the backfield. On another possession, Kedon Slovis lofted a ball deep down the sideline on third-and-one, and the Trojans couldn’t pick up the one yard needed with a fourth-down run. Harrell said he made a bad call with Wolfe’s positioning and he didn’t think Slovis realized it was third-and-one when he made that decision rather than handing the ball off. Harrell said he has to put “those guys in a better position to do their job.”

But of those situations moving forward, Harrell said USC has to see more success.

“We have to be better in short-yardage situations,” Harrell said. “I think it’s a mentality at times.”

For USC, getting an opportunity to work on those things this week coming off a win brings a much different feeling than if it was following a loss. Both Helton and Harrell have said they don’t know if last year’s team would have found a way to win that game.

“You should draw confidence that although we made a ton of mistakes that would normally beat you in a football game, we still found a way to win,” Harrell said. “That’s how good of a football team we have the opportunity to be. Moving forward, our goal has to be — we have to clean a lot of thing sup, we have to be a lot better, but as far as a team goes, we have a chance to be a special team when we can overcome all those mistakes.”