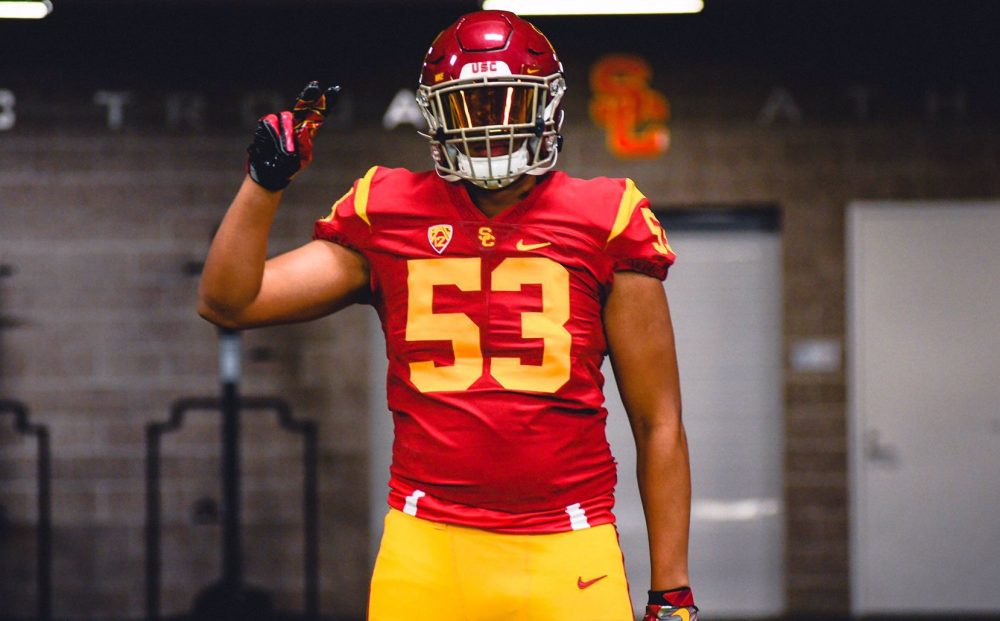 With the sporting world virtually shut down due to COVID-19, recruiting is the one thing still going strong in the college football world. USC is one of several programs that were lucky enough to host a couple of significant junior days before on and off-campus recruiting were shut down for the foreseeable future. And one player the coaches were able to spend some time with was defensive end Derek Wilkins.

Wilkins, a four-star defensive end from Santa Margarita High School, traveled to USC after participating in a Rivals Camp in late February, and walked off campus with an offer from the Trojans. The 6-foot-4, 250-pound prospect held offers from a number of Pac-12 schools, but his only real contact with USC had been head coach Clay Helton visiting his school in December to watch him work out.

He knew from that visit that he was on USC’s radar, and then some communication from Trojans defensive line coach Vic So’oto the week before the offer came. On campus, Wilkins was able to speak with both of them.

“He seems like a great guy,” Wilkins said of So’oto, who has made a quick impression with recruits during his previous stint at Virginia and now with USC. “I’ve been talking with coach Vic a lot. You can tell the way he talks that he knows what he’s talking about. He understands what he’s doing.”

The new defensive staff at USC has done a lot of the heavy lifting when it comes to promoting a strong recruiting presence for the Trojans. And one thing that group talked about was recruiting as a unit, with multiple coaches–especially defensive coordinator Todd Orlando–involved with every prospect.

Wilkins said USC sees him moving around on the defensive line based on his weight when he gets into college. So’oto has spoken about wanting to get his defensive linemen to a point where they can transition easily between positions in a three-man and a four-man front. Wilkins said the goal would be to play either 3 or 5-technique in a four-man front, and a 4-technique in a three-man front.

The new coaches also said they would attack the Southern California area, making it a priority and not letting any recruit they want leave the region. Wilkins said that is definitely a pitch he heard from USC.

“I’ve lived in Southern California my whole life, so I’m used to it,” Wilkins said. “USC being home helps. I know the climate, and going somewhere else is a little bit of a wild card.”

Wilkins did add that he isn’t opposed to heading elsewhere, and he’s looking at taking a few trips, including one to Boston College that he will now need to reschedule.

While recruits across the country will need rescheduled thousands of visits that were set to take place this spring, Wilkins isn’t yet stressing on timing to get those done in order to make a commitment. The NCAA has announced a dead period until April 15, which means no visits to campuses by recruits can take place until then at the earliest.

“Right now it’s just kind of go with the flow,” he said. “Obviously this is something we’ve never seen before and still don’t know the effects. We’ll see if everything is clear on the 15th [of April]. Right now I’m not really thinking about visits. I want to brave the storm and see if everything is back to normal, then I’ll sit down and go from there.”

Wilkins said the USC staff has been in touch a little more after the new restrictions were put in place, as they check in to make sure everyone is doing well with their health.

“I feel like they’re texting more to make sure we’re okay,” Wilkins said. “Obviously we have to get through this. They’re kind of in the same boat I am. They understand what’s happening but don’t know how the schedule will work. They don’t want to tell me something that gets contradicted later. So they’re making sure everyone is healthy and there are no major problems. Maybe closer to that day on April 15, we’ll talk about how we’ll handle it.”

Wilkins holds interest in all four in-state Pac-12 schools, so he isn’t worried about getting to those once the recruiting restrictions are lifted. He’d like to go into finance, accounting or something in the business world, and academics are very important to him as he looks for his college fit. That makes Stanford a strong contender for the defensive end, and ultimately a spot where academic acceptance could go a long way in determining his choice.

There are a couple of interesting schools in there for the 5-foot-10, 165-pound corner. After the back and forth between Arizona State and USC coaches–as well as former USC safety Chris Hawkins now coaching defensive backs for the Sun Devils–every recruiting battle that features those two programs is going to be one to watch. USC cornerbacks coach Donte Williams was recruiting Harvey at Oregon and will now chase him for the Trojans, but the Ducks are still included. Virginia Tech is also a school that could start to pop up on a few top lists for local prospects, as Harvey’s Premium 7-on-7 program visited the Hokies.

It would be a pretty big upset for 2022 cornerback Jaheim Singletary (Jacksonville, Fla./Robert E. Lee) to leave the Southeast, and a major one for him to head all the way to the West Coast to sign with the Trojans. But USC is in the mix for the nation’s No. 15 overall prospect in the 2022 class, and that’s what having Williams and a new recruiting approach can do.

Singletary included Florida, Florida State, Georgia, LSU, Oklahoma and USC as his top six schools at this point, and while the Trojans might be facing an uphill battle to sign him, these aren’t the kinds of top lists USC wasn’t included in the past couple of years.

And it was telling that Arizona State extended an offer a short time after Singletary released his list.

USC also went back into Texas for a defensive back, as safeties coach Craig Naivar and Orlando are very comfortable in that state, having coached previously at Texas and Houston. This offer went to 2022 safety Chace Biddle (Garland, Texas/Garland) and it was an interesting one, as the 6-foot, 170-pound Biddle held offers from just Kansas and SMU, but Texas and USC offered on the same day.

USC misses on a couple of standouts

Provided recruiting returns to normalcy and football gets going again, this is going to be a good class for the Trojans. But USC is also going to swing and miss at some big-time national prospects and that was the case recently.

USC was among the top six finalists for No. 59 overall prospect, cornerback Jakailin Johnson (St. Louis/DeSmet), but he became part of a massive recent recruiting run for Ohio State when he announced his commitment to the Buckeyes.