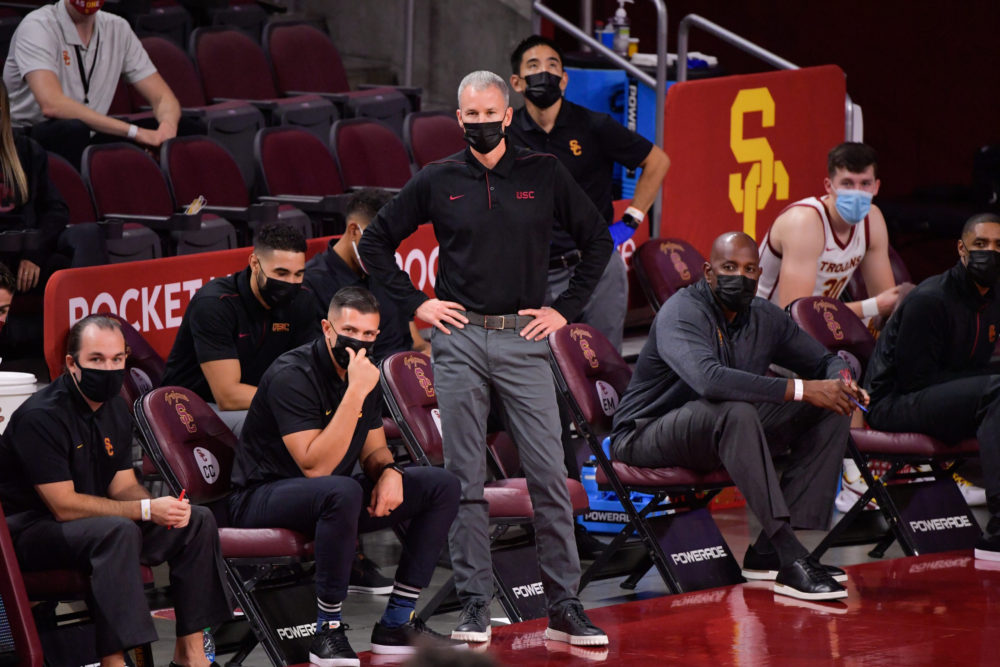 Under Mike Bohn, the USC Athletic Department has made a number of investments and personnel changes.

Mark Trakh “resigned” a week ago from the top job as the Women of Troy head basketball coach. Much of the football coaching staff has turned over (with one major exception); contract buyouts have been paid and several replacements are getting more money than their predecessors. Plus it’s impossible to keep track of what seems to be the non-stop addition of non coaching football staff additions. So what about basketball?

Stanford doesn’t publish information on basketball salaries or contracts, but Enfield has the fewest amount of years left on his contract of any of the other head coaches. He signed an extension for two additional years after the 2017 season in which the Trojans set a program record with 26 wins and finished fifth in the conference with a 10-8 conference record.

Enfield is reported to have been paid $3.1 million for this past season, which is less than Mick Cronin’s $4 million and Dana Altman’s $3.65 million. New Arizona head coach Tommy Lloyd will be paid $3.1 million as will the besieged Washington coach Mike Hopkins, so Enfield ‘s salary appears to be reasonably fair. Wayne Tinkle’s new extended contract pays $2.9 million at OSU, Bobby Hurley at ASU is at $2.6 million and new Utah head man Greg Smith will be paid $2.1 million, after replacing long time coach Larry Krystkowiak who was paid over $3.5 million.

In the bottom rung of the conference, Tad Boyle is paid $1.8 million at CU (which is surprisingly low), Mark Fox $1.7 million at Cal, and Kyle Smith $1.4 million at WSU.

Boyle and Altman are the only conference head coaches on the job longer than Enfield’s eight years.

UCLA added two years to Cronin’s contract after the great tournament run and he now has six years on his contract. OSU did the same for Tinkle after their amazing post season success and he also has six years remaining on his deal. New Utah head man Smith signed a six year contract.

Altman has five years left at Oregon as does Boyle at CU and Zona’s new coach Lloyd. Hopkins at UW and Smith at WSU both have four years left, and Hurley at ASU has three years and so does Fox at Cal..

Enfield’s contract expires in two years. Bohn was quoted as saying in March that he hadn’t addressed Enfield’s contract and instead was enjoying the great Trojan post season, which was reasonable at the time, but we are now in the last week of April.

Perhaps Bohn had the pending NCAA investigation in mind when he made that comment but that’s now in the rear view mirror. There was no finding by the NCAA of Enfield being personally involved in any wrong doing, the university fired lead assistant Tony Brand as soon as the allegations became public and there are no penalties imposed on USC basketball.

Maybe the OJ Mayo team had as much fan interest, but that’s not the way I remember it. Or perhaps Bibby’s Elite 8 team. But if Enfield isn’t extended there is a good chance he will view this as a message and quietly begin to look elsewhere. Bohn can’t let this happen.

If next season’s team receives a lot of attention thru specially designed media and fan outreach the interest level can become permanent and not just a one season phenomena. In some very early polls the Trojans make the preseason Top 25, and it’s hard to see anyone other than UCLA having a significantly better roster than the Trojans next year. Assuming Isaiah Mobley returns, and I do, he will likely be a preseason all conference selection.

The momentum of the past six seasons appears sustainable and now is the chance, perhaps the one chance for years to come, to take advantage of the new found interest in Trojan basketball.

Enfield Has The Best Record Of Sustained Success Ever At USC

Any way the key numbers are crunched Enfield has been a great success, and that’s before considering that since 2000 USC has fired two head coaches in mid season because of their toxic personalities and treatment of players. Player complaints led to Henry Bibby and disastrous Kevin O’Neill getting mid season pink slips.

To put those numbers in perspective, over the same six years the two leading programs n the conference were Oregon (68.3%) in conference games and Arizona (64.5%).

In five of the last six years the Trojans have had 20+ wins, including the school record 26 in 2017 and 25 this past season even though the season was shortened by four games.

USC has had 21 twenty-win seasons in its 115 seasons of basketball, and Enfield has five in his eight (or six) years. Tim Floyd had three 20 win seasons but didn’t get far in the NCAA Tournament, though he won USC’s only conference tournament title. Henry Bibby had two 20 win seasons and made one Elite 8. George Raveling had one twenty win team. Bob Boyd had three 20 win seasons, though in fairness it needs to be pointed out that during his tenure the regular season was expanded from 26 to 28 games and because of a much smaller NCAA Tournament field his teams played in only one NIT. The season was expanded again from 28 to 31 games in 1984.

One more point on wins and losses. In the last six years Enfield never had a 9-16 season like Kentucky.

Here are some other numbers. In USC history the Trojans have won the conference regular season once other than getting jobbed by the conference this year. One team putting their record on the line 20 times and finishing 15-5 is more worthy than another winning 14-18. When there is an uneven number of games played thru no fault of any team and the top two are within percentage points of one another, the Trojans held the trump card with their 14 point win over the Ducks in February, and for good measure USC beat them again by 14 in Indy. I’m one person who considers the Trojans the regular season champion.

In Trojan history they have finished second ten times, third twelve times and fourth five times. For many years USC played in conferences with less teams; the Pacific Coast Conference, the Pac 8 and for a long time in the Pac 10 (the PAC 10 would have been nice this year, getting rid of the CU Trojan killers). It was easier to finish higher in the standings with fewer teams.

The Trojans are in the midst of recruiting the 2022 class and it will be much more difficult for Enfield to tell recruits that they are assured of playing for him for only one season.

Enfield has been a great talent evaluator, sometimes picking up productive players overlooked by bigger name basketball schools. Nick Rakocevic was not high on the radar screen and he became a key player for four years. None of the transfers in the last two seasons were highly coveted. Last year’s group included key contributor Daniel Utomi, three point shooter Noah Baumann (who has since left for a big time school, Georgia, because the Trojans are adding four guards this summer and Noah realized minutes would be hard for him to find) and Quinton Adlesh who didn’t contribute much on the court but was elected a team captain by his young teammates and played a big leadership role.

This past year brought five more transfers. Tahj Eaddy, who was the Trojans’ second best player, although he didn’t start for Santa Clara most of the prior season. Drew Peterson was a key player and grad transfers Chevez Goodwin and Isaiah White have decided to stay an extra year. Josh Morgan is still somewhat of an unknown, but even If he is a complete bust (which I definitely don’t expect) four of five good transfers overlooked by most teams is pretty darn good.

Enfield’s Players Have Had Success

Evan Mobley is one of only four Trojans to be conference POY, one of three to be defensive POY, and one of two to be conference FOY. Chimezie Metu was named conference most improved player after his sophomore season. Enfield has had seven players named first team All Pac 12.

In the era of one and done, seven of his players have scored over 1000 points at USC: Jordan McLaughlin, Bennie Boatwright, Jonah Mathews, Nick Rakocevic, Elijah Stewart, Chimezie Meto and Nikola Jovanovic. He recruited and coached the player who is second on the career rebound list (Nick) and the top two players in the career made three point shots (Elijah and Jonah).

The Trojans have had four five star players in the last three recruiting cycles. Some will say that the Mobley brothers don’t count as much as other recruits, and perhaps that’s true. On the other hand, Onyeka Okongwu was always coming to USC and although Kevin Porter was injured a good part of his one season and wasn’t the most conscientious player, Enfield and staff found him before he exploded up the recruiting rankings and he has had some outstanding games in the NBA.

Next season’s freshman class is ranked twelfth in the country and first in the conference. Reese Waters, a top 50 player, got valuable practice time with the Trojans in the Spring. He is a big guard built like D’Anthony Melton and a very talented scoring threat from anywhere. Malik Thomas has shot up the recruiting rankings and is now approximately number eighty nationally. He is a very good scorer with over 2000 points in high school and handles the ball well. He had a remarkable run in the AAU circuit last summer and fall.

Six foot ten Harrison Hornery is a late bloomer who the Trojans were on early. He is averaging just over 20 points and has high rebound and assist numbers as well. He is an intriguing player on a Mater Dei team which plays the best high school competition. It will be interesting to see if he can break into the Trojan’s rotation this season with four bigs already on the roster along with three wings. Kobe Johnson comes from a loaded Wisconsin high school team and the Trojans are also after his point guard teammate who is a year younger. Kobe will get the opportunity in the fall to determine if he fits in this season’s plans.

Boogie Ellis is the highest rated transfer Enfield has recruited. He was a top 40 player in high school and is expected to replace Tahj Eaddy in the starting lineup.

There Is Reason For Optimism For This Season

The new players join a big group of contributing players from last season. Ethan Anderson, Drew Peterson, Isaiah White, Max Agbonkpolo, Boubacar Coulibaly (who I think will be a star, though perhaps not yet this year), Chevez Goodwin, and (hopefully) Isaiah Mobley.

This team will be very deep in the backcourt, at the wings and in the front court. Unlike any Trojan team I can remember this roster doesn’t appear to include any player who will not contribute over their Trojan careers.

Mike Bohn has said how much college basketball means to him. Now is the time for him to act to help secure the future and build on the recent success especially over the last two seasons.