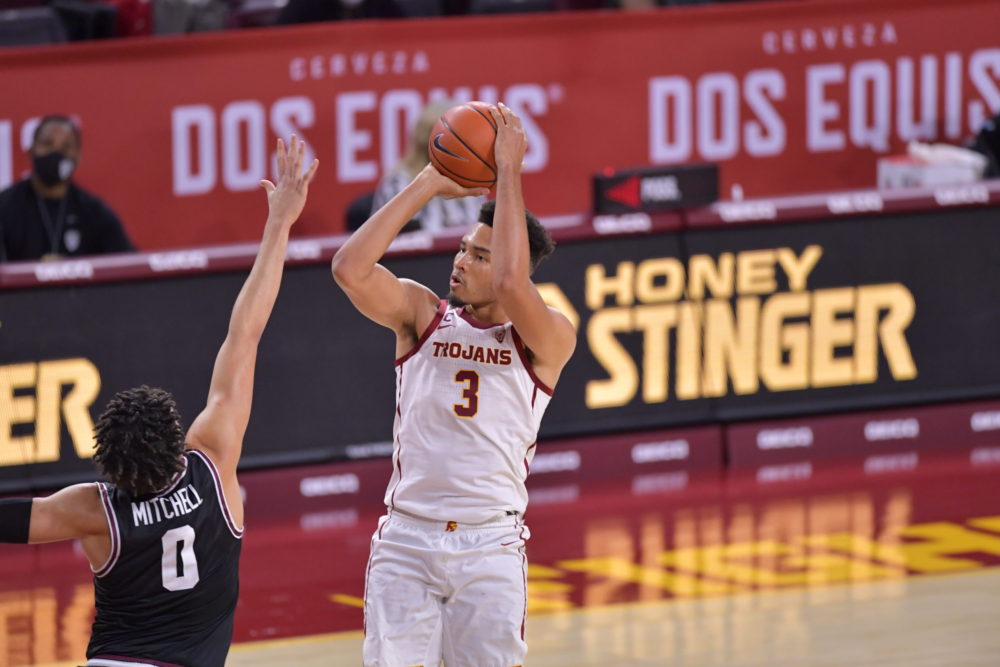 Unlike the first game back after the forced quarantine, the Trojans have now been playing and practicing for over two weeks. Of course there hasn’t been and won’t be an official statement on why this game was added just a few days after it was announced.

Three possible reasons come to mind. First, the Trojans might expect Ethan Anderson back for the next game and they want to have him play a game before getting back into the conference schedule.

Second, Coach Enfield may want a game in which it it likely Reese Waters, Boubacar Coulibaly, and Josh Morgan can get game experience in order that they will be more ready if needed as the season progresses.

Third, the staff may think another game will provide an opportunity for another win to improve their win total when post season selections are made in March. This explanation appears weak; a win over UC Riverside won’t measurably impact the Trojans’ NET ranking or how the selection committee views the Trojans and a loss to UCR  would be very bad.

There are likely other potential motivations or the actual reason may combine more than one of these explanations.

A Preview Of UCR

The Highlanders are 4-2 and are 1-1 in Big West play after splitting a pair of games with Hawaii this week. They were not scheduled to play again until Friday. UCR beat a struggling Washington team 57-42 on December 1; the Trojans host the Huskies on Thursday. UCR was picked to finish fifth in the preseason media poll in the conference in which UC Irvine was picked to finish on top. The Trojans ran over UCI on December 8 by 35 points.

USC is 6-0 all time against the Highlanders. The last time these teams met was 2013; the Trojans manhandled the Highlanders 70-26. The other games have been more competitive but all ended in Trojan double figure wins. UCR has an interim head coach, Mike Magpayo, who is the first Division 1 head coach of Asian descent. He took over this summer when the prior coach left to become the Associate Head Coach at Arkansas.

Magpayo has been on the UCR staff the past few years. He was primarily responsible for the defense which ranked very high nationally in almost all defensive metrics last season. The Highlanders were 17-15 last year, the most wins by UCR since they reclassified to Division 1, and 7-9 in conference games.

UCR is 52nd in defensive efficiency so far this season and 107th in offensive efficiency. The Trojans are 31st and 57th respectively. The Highlanders have made 47% of their shots, almost 39% from three and 67% from the line. Ten players are averaging over 10 minutes per game.

The Highlanders Have Some Talented Players And Size

UCR has looked west, very far west, for a number of players. Five players are from Australia and two more from New Zealand. The top player is Aninze Chidon, a 6’9” red shirt senior who had a stop at Washington State before settling in at Riverside. Chidon was honorable mention All Big West last year and was voted onto the five player All Big West preseason team this fall.

The two lead guards also have good size. The point guard is junior Flynn Cameron from New Zealand. He is 6’5” and weighs 210 pounds and is averaging 9 points, almost 6 boards and over 2 assists. Cameron has made 46% of his shots, 48% from three and 50% from the line. Sophomore guard Zyon Pullin is 6’4” and shoots the ball very well, making 56% from the field, 59% from three and 81% from the free throw line.

Today’s Pomeroy Ratings, a statistical formula based rating system, ranks the Trojans 17th, the highest rated PAC 12 team. These ratings are somewhat suspect since Oregon is 19th and Colorado is 20th and the Buffs have beaten both the Trojans and Ducks.

After many games this season Enfield has been asked why they can’t get more shots for Evan Mobley. Enfield has consistently said that Evan is usually double teamed and that Evan has been making the right basketball play on almost every possession. Last year the Trojans appeared to more easily get the ball inside to Big O and last year the Trojans didn’t have as many other scorers as they do this year to take some of the defense focus. They don’t run pick and rolls with Evan or have one big at the free throw line and one inside for an entry pass or lob, both staples in last season’s offense with Onyeka and Nick.

Evan is having a great freshman season on both ends. Still it feels like he can do more if he gets more touches inside. He usually isn’t doubled until he receives the ball and then the double team comes quickly. If he can receive the ball deeper he should have more opportunities to immediately go up for a shot. With his size and leaping ability he won’t get his shots blocked.

It will be interesting to see how USC’s bigs match up against UCR’s bulkier front court. So far the Trojans have done a good job of adjusting the defense to each team they play and have been very good on the defensive end in every game since the opener. The Trojans are very athletic and against ASU they blocked shots everywhere from at the rim to beyond the three point arc. It’s very unlikely the Highlanders have seen a defense like USC’s.

UCR is one of the teams that fly under the radar in Southern California. The team offensive numbers are pretty good though playing the Trojans is a big step up in competition. Enfield and his staff have done a good job of keeping the Trojans focused on each opponent and don’t expect USC to overlook the Highlanders. This game looks like a comfortable win and some court time for players at the end of the rotation.