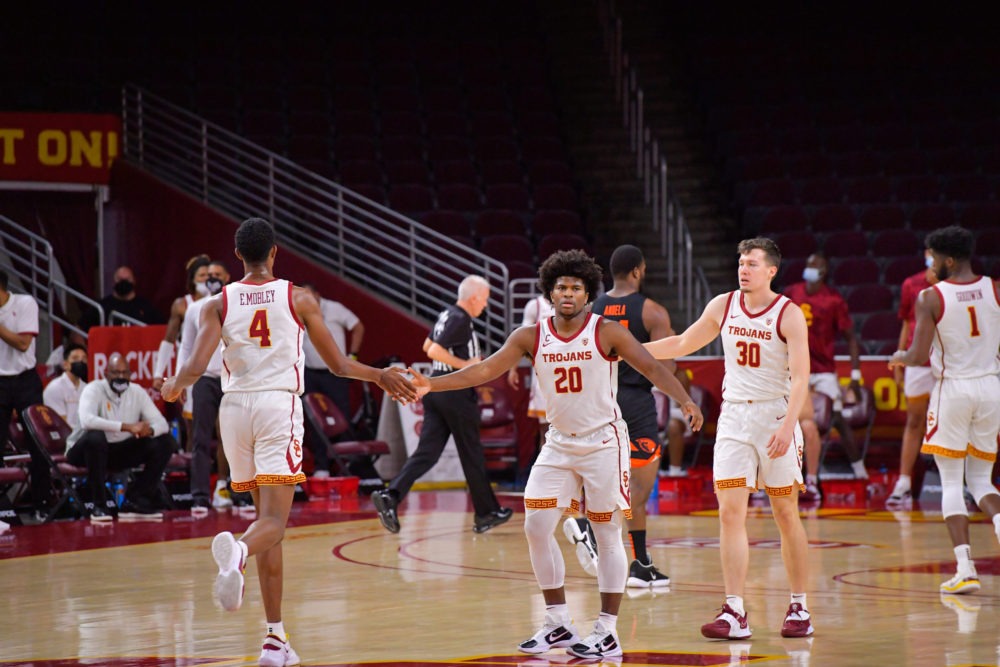 The Pac-12 conference regular season title has become a battle between three teams. USC, UCLA and Oregon each have three conference losses going into the last two weeks of the season. Thanks to the Pac-12 office the Trojans have a much tougher path to the title.

The Pac-12 Has Changed The Schedule To USC’s Detriment

The Trojans’ schedule was changed a few times to squeeze in two games missed due to Covid problems. Until recently Monday was a makeup game against Stanford but is now the makeup game against Oregon and the Trojans and Cardinal will play sometime the next week. The result is that USC plays three games this week; hosting Oregon, at Colorado and at Utah. With games against Stanford and UCLA the next week, USC will play the full twenty game conference schedule.

The original schedule of twenty conference games had each team play two other teams once and play the other nine teams twice. The Trojans were always scheduled to play Oregon once. On the other hand, UCLA and Oregon were scheduled to play twice; both of their games were postponed due to Covid issues in the Ducks Program and have not been rescheduled.

Instead of having UCLA play Oregon on Monday so that USC and UCLA would each play nineteen conference games, the Pac-12 has left USC with five games over a 12 day period and the other two contenders playing three games. The conference could still add a game between the Bruins and Ducks next week, since both teams now only play on Saturday; even then, the Trojans will have played twenty games and the Bruins nineteen.

The most equitable schedule would have Oregon play two games next week. The fewer games the Ducks play the better chance they have to finish with the conference’s best winning percentage. The Pac-12 has not announced how the regular season title or tournament seeding will be decided between teams which play a different number of conference games. Some conferences have announced that winning percentage will be the deciding factor. The Trojans will have a more difficult path to the best winning percentage due to playing more games. Under no circumstances should USC play more than nineteen games; UCLA and Oregon should play once over the next two weeks which would result in UCLA also playing nineteen games.

Playing more games means the Trojans will have a higher winning percentage than other teams with the same number of losses. However, playing more games also provides more opportunities to suffer another loss. Thank you Pac-12!

After the loss to Arizona the Trojan’s NET ranking slipped from 14 to 19. The current highest NET ranked team the Trojans have beaten is BYU at 29. Number 20 Colorado beat the Trojans but USC gets a second chance later this week. Oregon is number 40 in the NET and have won five straight.

Oregon head coach Dana Altman is the best in the conference. He was the national coach of the year in 2013 and the conference coach of the year in 2013, 2015 and 2016. His Oregon teams have won 20 or more games in ten straight seasons and he has 23 consecutive seasons with a winning record at Oregon and Creighton. His Oregon teams have made three Sweet 16’s, two Elite 8’s and one final four. He is almost a magician at finding players to add to the roster each season including good players from major conferences.

The Ducks have not been a good rebounding team this year but they recently added a 6’ 11” freshman who finished high school early and adds an inside presence. Oregon had been counting on N’Faly Dante for this role but he tore an ACL early in the season. The Ducks make 46% of their shots from the floor, 35% from three, and 70% from the line.

The Ducks are not big. Recent freshman addition Franck Kepnang looks a bit like former Ohio State star Greg Oden as a freshman; in other words, he looks closer to 30 than 18. He is an immediate inside defensive force for the Ducks though his offensive game is still developing. He is averaging only 3.3 points and 1.8 boards. He has made 67% of his shots and 60% from the free throw line but his minutes have been increasing lately.

The two leading scorers are Eugene Omoruyi and Chris Duarte. Omoruyi is a 6’6”, 235 pound red shirt senior forward. He transferred from Rutgers where he was honorable mention All Big 10. He averages 17.2 points, 5.4 rebounds, 2.2 assists and 2.8 turnovers. Omoruyi makes 47% of his shots, 38% from three and 76% from the line.

This game presents an obvious contrast in styles. The Trojans are much bigger inside and need to take advantage of their size and score and rebound inside. Isaiah Mobley and Chevez Goodwin need to provide help to Evan and the bigs need to challenge Kepnang and draw fouls. Both teams have talk guards and wings but the Oregon group are better and more consistent scorers; four average 38% or better from three. The Trojans must run the Ducks off the three point line and limit open threes. USC has been a good perimeter defensive team this season but have fallen off a bit recently. The team which slows down the other’s strength will likely win.

The Trojans need supporting players like Isaiah Mobley, Isaiah White, Drew Peterson, Chevez Goodwin and Ethan Anderson to score and play well on defense. Except for Chevez this group struggled against Arizona.

Saturday’s game raised questions about the Trojans. The lack of aggressive play and effort in the first half has happened in several games. I think the Ducks have too many scorers and will likely win but if the Trojan supporting cast plays well on both ends the Trojans can win this game. This game will have a significant impact on the conference race.