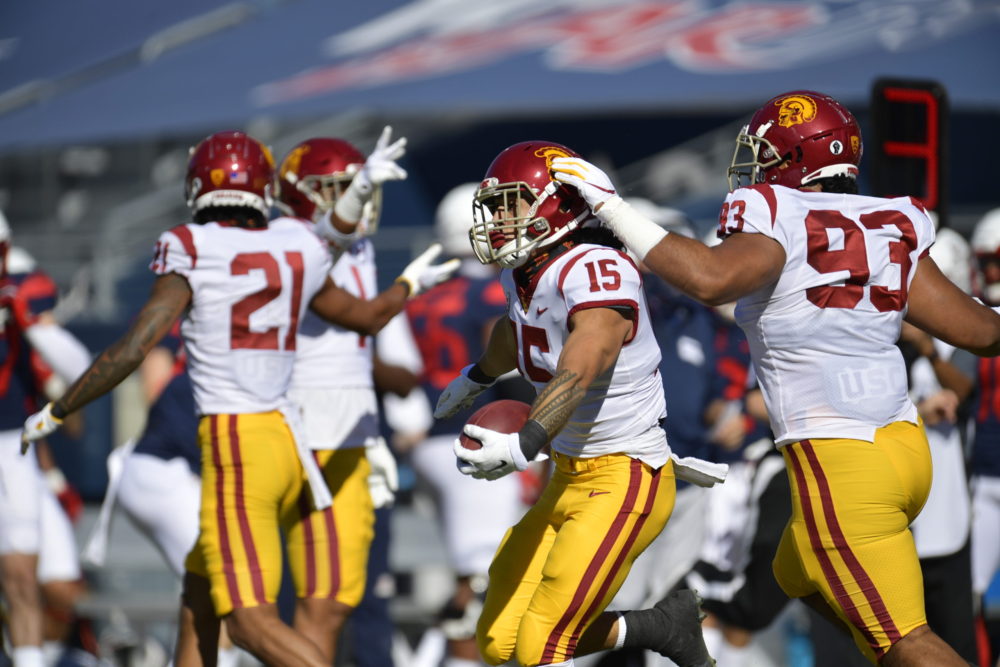 There is still plenty of offseason left for moves to be made regarding the USC 2021 roster, in terms of players, coaches and personnel, but to this point, here is a look at some of the changes made on the various levels of the roster.

Tim Drevno was let go and multiple reports have surfaced stating that USC will hire Texas State offensive line coach Clay McGuire to the same role with the Trojans. McGuire has experience coaching running backs and special teams in addition to the offensive line. His playing experience as for four years as an H-back in Mike Leach’s offense at Texas Tech. McGuire would bring a complete understanding of offensive coordinator Graham Harrell’s Air Raid and should put all the offensive coaches on the same page as far as moving that offense forward.

After two years as the head USC strength and conditioning coach, Aaron Ausmus was not retained for this year. USC grabbed Notre Dame assistant strength coach Robert Stiner and installed him as the Director of Football Sports Performance. Stiner spent the 2017 season at Cincinnati before moving to Notre Dame for the 2018 and 2019 seasons.

USC continues to take positive steps forward with its recruiting department as the Trojans were able to hire Marshall Cherrington away from Cal. Cherrington is very familiar with the USC football program, having attended USC and serving as a football operations manager for the Trojans. He is known as an excellent recruiter and will be another asset for the Trojans in that regard.

Defensive tackle Jay Tufele opted out of the 2020 season and has made himself eligible for the 2021 NFL Draft.

Defensive tackle Marlon Tuipulotu announced he will forgo his remaining eligibility and make himself eligible for the 2021 NFL Draft.

All-American safety Talanoa Hufanga has completed his three-year USC career and announced his declaration for the NFL Draft.

Offensive tackle Alijah Vera-Tucker initially opted out of the 2020 season, but then returned to the team when the season went forward. He’s now announced that he will make himself eligible for the 2021 NFL Draft.

Redshirt senior Tyler Vaughns would have been eligible to return for the 2021 season as the NCAA gave all student-athletes an extra year of eligibility. But Vaughns announced that he will make himself available in the 2021 NFL Draft.

Running back Markese Stepp entered the transfer portal and announced his commitment to Nebraska.

Connor Murphy has entered the transfer portal and continues to look for a transfer destination.

Linebacker Palaie Gaoteote entered the transfer portal during the season and is still looking for a potential landing spot.

Players on track to return

The deadline for underclassmen to declare for the NFL Draft was on Monday, so safety Isaiah Pola-Mao is set to return to USC for the 2021 class. There had been thoughts that he could be one of the underclassmen to watch as far as declarations for the draft.

There has been no official word from the senior running backs, though there doesn’t need to be in order for players to take advantage of the extra year afforded to them by the NCAA. Head coach Clay Helton has reportedly said both running backs are on track to return for the 2021 season, which would give the tailback room a huge lift in terms of experience and needed bodies.

McKenzie was eligible to return for the 2021 season but he put out a statement saying that he would return. Liam Jimmons was a redshirt senior this past season and has given no indication that he won’t take advantage of the extra season. Jimmons is a perfect example of someone who could really benefit from the extra year, as he continues to get more offensive line experience and could take a big step forward as a sixth-year senior.

The former Alabama defensive tackle will transfer to USC and was announced by the Trojans as part of the early signing day class. Sopsher will likely get the first shot at replacing the departed defensive tackles and his performance this year could go a long way toward shaping the overall production of the defensive line.

The former Texas safety has announced his intentions to transfer to USC. Alford played a hybrid safety/cornerback position for the Longhorns and should have a chance at significant playing time for the Trojans. While he didn’t play for defensive coordinator Todd Orlando or safeties coach Craig Naivar at Texas, both recruited them and are very much aware of his abilities.