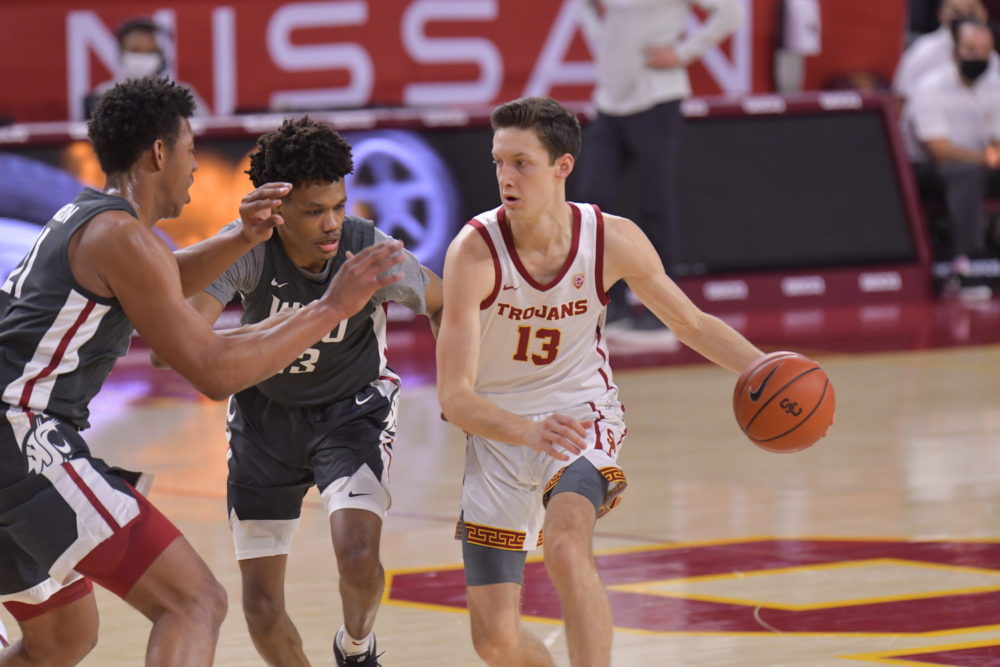 We all know that Evan Mobley is the MVP on this season’s Trojan team by a wide margin, but it is not easy to select the Trojans’ runner up. When the season began it appeared there would be four legitimate candidates for the second spot but to this point there are only two Trojans in contention.

Evan Mobley leads the Trojans in points, rebounds, offensive rebounds, defensive rebounds, shooting percentage, two point shooting percentage, and blocks per game. He is second in steals, 1/10 of an assist per game behind Isaiah White. After the Cal game Evan is now making 70.5% of his free throws, good for fourth best on the team, and he also leads the Trojans’ front court players in assists. His only negative stat is that he has the most turnovers on the team. At the beginning of the season no one would have been surprised at Evan’s stats after 15 games.

There Were Four Pre-season Contenders

Picking the Trojans second most valuable player is much more difficult. In the fall it seemed likely that Isaiah Mobley might have the second best season for the Trojans. With Evan commanding so much attention inside things have opened up for Isaiah, though in fall practice it appeared that Ethan Anderson, Drew Peterson and Tahj Eaddy could also turn out to be the second best Trojan on this season’s team.

Ethan was injured and has played in only 7 games. His minutes per game are lower than expected while he plays himself back into shape. He could still have a tremendous run through the remaining conference games, the PAC 12 Tournament and the NCAA Tournament, but to this point his limited production leaves him out of the discussion. He is averaging 5.6 points, 1.7 rebounds and 2.6 assists. The offense runs better when he is on the floor and his numbers will improve as the season continues.

Isaiah Mobley is much improved over last season on both ends of the court. He is stronger inside on offense and defense and is a much more confident scorer. He has been a solid contributor in almost every game, though he sometimes takes bad shots. Isaiah has not yet lived up to his five star rating but some players simply take longer to develop.

Isaiah averages 9.7 points (fourth on the team) and 7.5 rebounds (second). He led the team in rebounding for most of the season until falling off a bit lately and Evan having a couple of big rebounding games. Isaiah averages 1.8 assists and 1.4 turnovers. Before the season it was expected that Isaiah would get most of his shots inside and make a higher percentage from the floor than his current 46% and unfortunately he has not improved from the free throw line where he also has made only 46%.

Tahj and Drew have both played well this season and it is hard to select one over the other as the second best player on the team. Before the recent two game road trip it would have been an easier decision, but Drew struggled in both games. Against OSU Drew made 3-9 shots including 2-5 from three for 10 points. He had 3 rebounds and 2 assists, but he uncharacteristically turned the ball over 5 times. He also struggled on the final possession after Coach Enfield designed a play which put the ball in his hands, winding up taking a wild shot with a few seconds left before he had his feet set.

The difference was more pronounced at Cal. Drew made 1-8 shots, missed his only three, and made 1-2 free throws. He added 3 rebounds and 2 assists.

Tahj had a big game in Berkeley. He scored 18 points on only 8 shots, sinking 3-4 of his three point attempts and 5-6 from the line. He also added 3 rebounds and an assist.

A decision based only on this trip would greatly favor Tahj.

Drew averages almost an assist per game more and has 51 on the season compared to Tahj’s 39. The turnovers are close; Drew 27 and Tahj 23.

They both have been efficient on offense. Tahj’s shooting line is 45% from the floor, 38% from three and a team leading 79% from the line. Drew’s splits are very similar: 44%, 40% (second only to Ethan who has only a handful of three point attempts), and 71%.

And The Winner Is:

To date I believe Drew has been the Trojans’ second best player. They have both made some big shots in close games but Drew has done more things to help USC win. He’s played with the ball more than Tahj, has blocked a few shots and creates more problems for the defense. When he drives into the lane his skill set gives him four: he can take it to the rim, stop 8-10 feet and shoot a fade away, look for Evan or Isaiah rolling inside after a screen, or pass the ball outside to an open shooter. The coaches demonstrated their confidence in Drew when they put the ball in his hands for the final possession in the OSU game. Ethan was not in the game for the last possession, and whether Enfield would go to Ethan instead of Drew in a similar situation after Ethan is fully back from injury is an open question.

Tahj has been very good in the lane and on the perimeter. He has the ability to come to a jump stop in the lane and convert a jumper from ten feet. He also drives well to the basket if he gets an opening and has been very successful using his body to shield against bigger defenders and make a one handed scoop shot. Other than Evan he may be the best Trojan in creating his own shot.

The bottom line is that the Trojans would not have 12 wins without Drew, Tahj and Isaiah. After the win over Cal Enfield said they might not have won that game without Ethan. Isaiah White, Chevez Goodwin and Max Agbonkpolo have all made important contributions to the Trojans success, but at this point in the season my vote goes to Drew Peterson as the runner up in the MVP category.