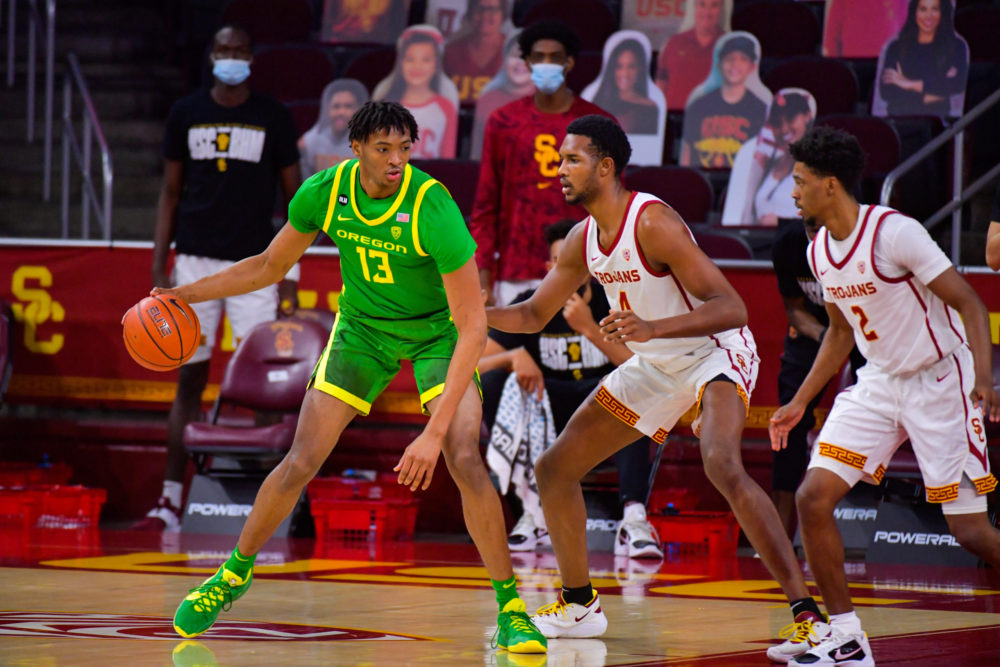 The Sweet 16 matchup between Pac-12 rivals may be decided by which team can force the other to change how they play. The Ducks get big minutes from their starters and do not get many points from the bench. Four of the starters are 6’6” and the other is 6’5” and they are all very athletic. Oregon plays a pressing defense, looking to trap the ball, jump passing lanes and create turnovers. All five starters shoot 37% or higher from three point range.

The Ducks move the ball quickly on offense and try to force bigger defenders to leave the post and defend the perimeter against the quicker Ducks. They look for back door cuts to the basket or lobs to the rim when they draw the opponent’s bigs away from the basket.

The Trojans play a completely different style. They rely heavily on Evan and Isaiah Mobley to score inside and occasionally from the perimeter. Along with Chevez Goodwin off the bench they are 7’0”, 6’10” and 6’9” inside. In the last few weeks Isaiah has been making shots from beyond the arc which opens up more room inside for Evan.

Most teams double team Evan when he gets the ball inside. If the double is late Evan will dominate any of the Ducks. USC will occasionally move Evan out to the free throw line and beyond in order that he can have the ball against a single defender and drive, shoot from 10-15 feet, or find an open teammate. The Trojans are inconsistent from beyond the arc. Until Isaiah began to routinely make three point shots Tahj was the most reliable perimeter scorer, though Isaiah White, Drew Peterson and Ethan Anderson can make threes.

Evan is the key defender inside. He has tremendous timing and leaping ability and alters shots he doesn’t block. USC uses its great length to force bad or contested shots.

These teams create matchup problems for the other, and one or both could play a lot zone to compensate for, in USC’s case, the inability of the front court players to defend against smaller, quicker Ducks outside; and in Oregon’s case, to try to reduce the number possessions where the Trojans get the ball inside against a smaller defender and to jump passing lanes andcreate turnovers.

This game may be decided by whether one team is forced to go away from its strengths to try to stop the other team. Can the Trojans force the Ducks to play their taller reserves more than usual to defend the Mobleys and Chevez inside? Or can the Ducks force USC to play only one big with four wings/ guards? If either team can dictate how the other plays it could be the decisive factor in the game.

The Ken Pom Rankings Of The 16 Teams

The Ken Pom statistical model provides the best evaluation of teams across the country.

Here are the current rankings for the remaining Tournament teams:

Comparative Stats Between The Two Teams

As of Friday morning the Trojans are a two point favorite and both teams are healthy. The winner will play the winner of the Gonzaga – Creighton game in the Elite 8 on Tuesday.

The Ducks have very balanced scoring from their five starters, all of whom average double figures and they all make a high percentage of their shots and threes. The starters account for 68 of the team’s 74 points per game. These numbers reflect one reason the Trojans want to force the Ducks to play a big off the bench or get into the bench due to foul trouble.

Like Omoruyi, 6’6” senior guard LJ Figueroa is a grad transfer. He averages 12.6 points, 6.2 rebounds and 1.6 steals. Figueroa makes 48% of his shots, 39% from three and 66% from the line. In several games this season he made crucial shots late in the game and also carried the Ducks for stretches with his scoring.

The other starter is 6’6” junior forward Eric Williams. Although he is the least publicized starter he has had a good season. Williams averages 10.3 points, 6 boards, 1.7 assists and 1.3 turnovers, and makes 45% of his shots, 41% from three and 73% from the line.

The two front court players coach Dana Altman could turn to on his bench are 6’8” sophomore forward Chandler Lawson and 6’11” freshman center Franck Kepnang. Lawson averages 18 minutes per game but only scores 4.5 points and grabs 3 boards. Kepnang joined the Ducks mid season from high school, like Trojan Reese Waters. Kepnang is a big physical presence who reminds me of Greg Oden, the former Ohio State star, because they both look closer to 30 than 18 in their freshman seasons. Kepnang averages 8 minutes per game and only 2.3 points and 3 rebounds.

The Trojan win over Oregon was their only win in a a four game stretch in mid February. They were 2-2 after that game in the regular season, beat Utah but lost to Colorado in the Pac 12 tournament and have two good wins in the March Madness.

Oregon was in the middle of winning 9-10 when the teams played, the only loss at Galen, and they won five in a row to close out the regular season. They lost to Oregon State in their second game in the Pac 12 Tournament and after a bye because VCU failed Covid testing they beat Iowa in the round of 32 in Indy.

In their prior meeting USC beat Oregon 72-58. The Ducks struggled early and fell into a 15-0 hole. The Trojans led 43-22 at the half and though the Ducks made a second half run the lead never shrunk below ten. Isaiah Mobley did not play in that game.

Drew Peterson had a big game scoring 15 points and making half of his 12 shots and half of his four threes. He also grabbed 11 rebounds and dished out 4 assists.

Evan took only 7 shots and finished with 11 points.

The Trojans out rebounded Oregon 15-9 on the offensive end and committed 16 turnovers.

Figueroa and Williams led the Ducks with 14 points each. Figueroa made 4-6 threes and Williams made 6-13 of his shots. Duarte was limited to 11 points and Omoruyi made only 3-9 shots and totaled 9 points.

Both Teams Have Played Well In The Tournament

This year’s version of the NCAA Tournament has brought more chaos than usual. The seeds of the remaining 16 teams add up to 94, the highest number ever. Second seed Iowa was a five point favorite over Oregon but the Ducks outplayed the Hawkeyes throughout the game. They led by 10 at the half and coasted to a big win.

Oregon made 56% of its shots and 44% from three against Iowa. The five starters all had good games. Duarte scored 23 points and added 7 assists. Figueroa had 19 points and 6 boards. Richardson scored 19, grabbed 6 rebounds and had 7 assists. Omoruyi scored 17 points, had 6 boards and dished out 5 assists, and Williams scored 9 points. The Oregon bench only contributed 6 points and 5 rebounds.

The Ducks had a great defensive game plan. They did not focus on All American big Luka Garza who was a big match up problem, but tried to shut down his teammates. Garza scored 36 points and fellow starter Joe Wieskamp added 17. The other three Iowa starters didn’t score and though they received good contributions from their bench, three starters with zero points was their undoing.

In the Trojans two Tournament games they held both Drake and Kansas to 29% from the floor. USC really clamped down on Drake in the second half limiting the Bulldogs to 7-37 (19%) and 2-14 (14%) from three. The Trojans also gave the ball away only 9 times.

Every USC basketball fan and even the occasional Trojan follower will remember the 34 point massacre of Kansas in the second round. The defense was great, Isaiah Mobley continued his run of tremendous shooting from three (4-5) and the Trojans made 57% of their shots and 61% of their 18 threes and out rebounded the Jayhawks by 16. This team can not play any better. If they can duplicate that performance they have a chance to beat any of the remaining teams in the Tournament.

The Trojans Will Beat Oregon

Of the teams remaining only Gonzaga, Alabama, Loyola, and Houston have more wins this season than the Trojans. That number is misleading to a degree because not every team played the full 27 game regular season schedule but it does reflect how much success this Trojan team has had.

USC is playing its best basketball in Indy, especially on the defensive end, and it is defense where the Trojans have their biggest advantage against the Ducks.

I come back to the question posed at the outset; which team can force the other to change its style of play. Of course it might be a very close game and both coaches may choose to stay with the lineups which have brought them to the Sweet 16. The Trojans have more room for error. They bring Drew, Ethan, Chevez and Max off the bench and they usually all contribute. If a starter other than Evan or Tahj is in foul trouble they have players to fill the void and the two offensive leaders have not had to play with foul issues many times this year.

If one or more of the Ducks gets called for several fouls they will really suffer. Evan has the ability to cause problems for Omoruyi and if they bring in one of the two front court bench players to defend Evan one of their scorers is on the bench.

The Trojans can’t expect Oregon to struggle to score early in the game as they did in their first meeting. Altman is a very good coach and he will have developed a few new wrinkles to throw at USC. Two things have changed dramatically for the Trojans in the last month. Foremost is Evan is playing much more aggressively at the offensive end. He won’t be limited to seven shots this time around. And his increased assertiveness may cause foul trouble for Oregon.

Second, Isaiah Mobley has found his outside shot over the last month. If he continues to make threes USC is much harder to defend. No one on Oregon has the size to stop his perimeter shot.

Expect both teams to switch defenses at times to try to neutralize the other’s offense. The Trojans need to handle the Oregon pressure defense and avoid turnovers. Given everything, I’m going with the hot Mobleys over the hot Ducks.