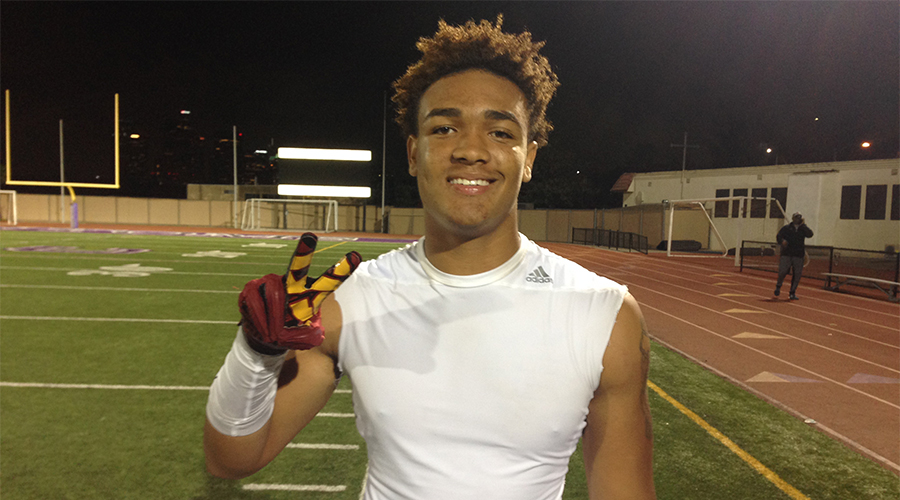 USC has been on a tear on the field throughout the last two months, and as a direct result the Trojans have gained some real momentum on the recruiting trail, with an extremely impressive list of official visitors on campus this past weekend serving as proof.

As such, it seems a forgone conclusion that the coaching staff will almost certainly look to fill every available slot in the upcoming recruiting class. That exact number still hasn’t officially been determined, but with some attrition on the current roster already, as well as the expected departure of Max Browne following this season, not to mention a couple more players potentially announcing for the NFL draft in the future, it wouldn’t be a surprise if the Trojans are able to take the full maximum at their disposal of 23. They could, however, also add some more recruits under the blueshirt tag, in which case those scholarships would count toward the following class – just as was the case with Stevie Tu’ikolovatu and Michael Brown prior to this season.

Holding a total of 16 verbal pledges at this time, that would appear to indicate that the Trojans have a maximum of seven slots left. But as is always the case, there is a possibility that some of those recruits currently committed to USC will ultimately wind up elsewhere, so that number is extremely fluid.

Here’s a complete position-by-position glance at where USC stands today when it comes to the Class of 2017.

The Trojans coaching staff has always wanted to take one quarterback in this class, and that desire became somewhat of a necessity when it became clear that Browne would depart from the program following this season. Fortunately for USC head coach Clay Helton and Co., they scored a major coup in Sears, who made the decision to flip from Duke to USC earlier this month. Always a prospect at the top of their wish list, they continued to maintain contact with him following his pledge to the Blue Devils this past August, and their hard work obviously paid off. Honolulu (Hawaii) St. Louis star and Alabama-commit Tua Tagovailoa was another quarterback being pursued by USC, but it seems unlikely that will continue to be the case.

The first commit for the Trojans in the Class of 2017, Carr is a fantastic talent with big-play ability and a strong all-around skill-set. Having taken unofficial visits to Michigan and Miami (Fla.) this past summer, he’s long maintained that he would take all five of his official visits, but it remains to be seen if he’ll actually follow through with those plans. He was originally slated to take one of those officials to UCLA for their crosstown clash with USC, but that was changed to an unofficial. Assuming he sticks, he could be the only running back in the Trojans’ class, but the possibility does exist that they will add one more. Harris, an Alabama commit, took an unofficial visit to USC this past summer, and he’s said that he could return for an official, but it would be somewhat of a surprise if both he and Carr wind up at the same school. Habibi-Likio is a newer name who took an unofficial to USC earlier this month, and he plans to return for an official in January. Oregon, Cal, Boise State and Utah are some other schools that he is looking at.

USC already has a pair of outstanding wide receivers in the fold in Grimes and Williams, and there’s always a chance that Juwan Burgess could wind up here as well. Having taken five wide outs in the previous class, the Trojans staff could call it a day at the position, but if one of the big names left on the board wants to come, they’ll certainly make room. Lewis, one of the most prized receiver prospects in the nation, certainly qualifies, and USC has made up some ground as of late. In fact, the Trojans coaches are scheduled to be in-home with the Hawkins star on Monday night. They still have quite a battle on their hands, however, with Nebraska, Oregon, Alabama, Oklahoma, Washington and Arizona among those also in the mix. Brown, from the JUCO ranks, just received an offer from USC recently, and he’s another player to keep close tabs on.

It looks like the Trojans coaching staff would like to bring in a total of two tight ends in this class, and they already have a pledge from a solid all-around prospect in Krommenhoek. Falo is a prized talent who has expressed interest in taking an official visit to USC, but he’s still wide open at this point. One tight end who took an official visit to USC this past weekend was Patton, a current Arkansas commit.

This is a position group that should be extremely interesting to watch in the coming months. The Trojans already have a solid foundation here with verbal commits from Neilon, Vera-Tucker and Vorhees, but they’re still in on some real game-changers that could elevate this group from the very good one that it currently is, into one of the absolute best in the nation. Two of those big-time performers, Jackson and Sarell, just took an official visit to USC this past weekend. The Trojans look to have a particularly good shot at Jackson, although Arizona State, Arizona, Nebraska, Michigan, Oregon, Washington and Texas A&M are still in the running as well. Sarell and the Trojans staff didn’t have much of a relationship as recently as just a few weeks ago, so the fact that he came for a visit certainly says something, but Nebraska, Notre Dame, Stanford and Washington got a big head start in this race. USC also isn’t giving up on Davis, while Ashley, Donaldson, Filiaga and Leatherwood are among those who have brought up the possibility of taking an official visit to USC.

The Trojans have a pair of interior defensive linemen committed in Lichtenstein and Lynch, but they’re likely to take at least two more. Lang and Andrus are two local players that USC is doing well with. Lang, in particular, has been to a number of USC games this year, and standing 6-foot-6, 260 pounds, he would bring a unique combination of size and athleticism to the fold. From out-of-state, Jackson, Pili and Tagovailoa-Amosa visited USC this past weekend, and the Trojans look to be doing well with the latter two, in particular. Ford, Tufele, Vimahi and Wilson are some other prospects who will potentially visit in the weeks ahead.

Moving to the outside, the Trojans have verbal pledges from a pair of players who project here in Echols and Falaniko. Johnson, a Miami commit, is another player who has shown renewed interest in USC as of late, and he was among those who took an official visit to USC this past weekend. The Trojans are still also going hard after Phillips. With family ties to UCLA, where he committed last spring, it seems unlikely that he will part ways with the Bruins, but the USC staff is still trying.

There aren’t a ton of names out there at inside linebacker, but in addition to Green, who committed this past May, USC is still very much involved with both Jones and Katoa. The staff is thought to be doing particularly well with Jones, who is also capable of lining up on the outside. He is likely to visit USC sometime in January, with programs like Florida, Florida State, Oklahoma, Ole Miss, Texas A&M, and UCLA also vying for his services, and it will be interesting to see if the coaching hires at LSU and Texas have an impact on him. Katoa, meanwhile, just recently received an offer from the Trojans, and it obviously made a big impact because he immediately scheduled an official visit for this past weekend. He’s also looking at Boise State, Utah, Utah State and Washington.

Both Miller and Burgess are outstanding athletes, with both players possessing the ability to line up at multiple spots for the Trojans. That gives the staff some flexibility here, so they will likely take at least one more player at the position. Jarrell is certainly a possibility, and he currently has a top 3 of ASU, Cal and USC. He’s already unofficially visited the Trojans campus twice, and he should be back soon on an official. Bolden is another name to watch. Having decommitted from USC this past July, there are murmurs that the Trojans are, once again, a strong contender in the race for his signature along with Ohio State, Colorado, UCLA and Arizona State. Pola-Mao is another prospect whom the staff has made progress with as of late, and he will likely take an official visit to USC.

Expect the Trojans to potentially add up to two more cornerbacks in this class. There is a ton of talent at the position, but it’s hard to tell who USC has the best shot at here. The biggest name that the Trojans are still in the mix with is probably Holmes. USC was an afterthought in his recruitment at one point, and while the staff still has ground to make up, they definitely have his attention now, and he’s tentatively scheduled to come in on an official visit on Dec. 2. Sheffield, formerly of Alabama, has now taken two official visits to USC, so it’s safe to say that the Trojans at least have a chance. USC also appears to have a shot at flipping Je’Quari Godfrey, a Cal commit who will visit on the weekend of Dec. 9, as well as Blades, a Florida commit who will likely visit later that month. Arizona-commit Greg Johnson and Oregon-commit Deommodore Lenoir are also among those still being pursued.