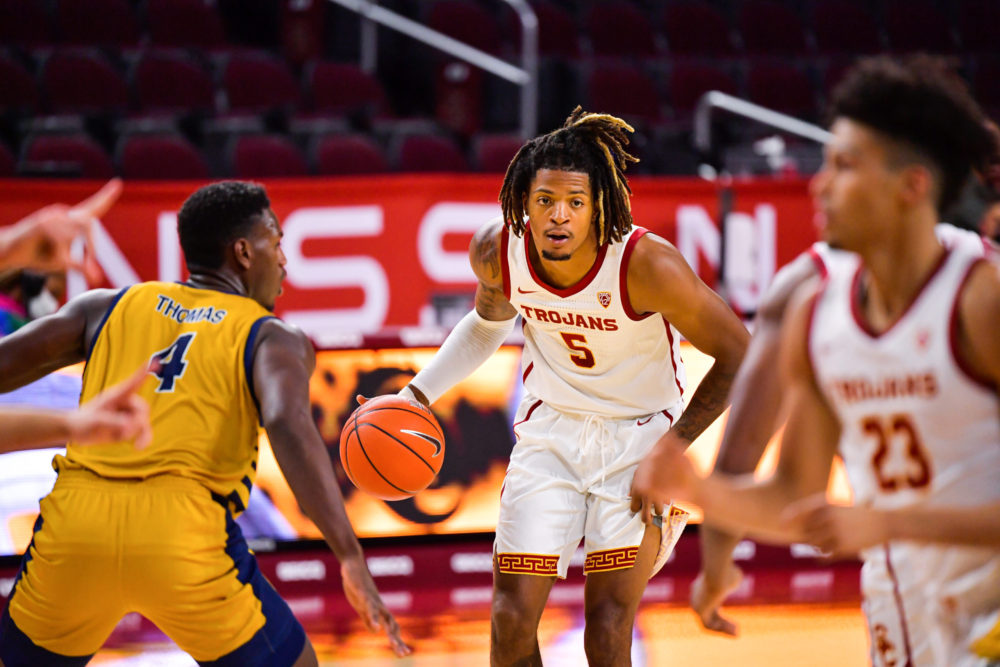 Isaiah Mobley has declared for the NBA draft but is reserving the ability to return, though that decision is likely months away. Isaiah will try to get a read on his draft prospects at the combine, which has been pushed back this year due to the delayed start of the NBA season. The final day of the combine is June 27 and a player can withdraw from the draft as late as July 19.

The Trojans currently have 12 scholarship players for the 2021-2022 season without counting Isaiah M, though Isaiah White and Chevez do not count against the scholarship limit of 13. Even if Isaiah Mobley returns the Trojans can add two more players.

The recent de-commitment by JC forward KJ Allen to Texas Tech and the uncertainty over Isaiah M’s return raise the question of whether the Trojans need help from the portal in the front court. Even if Isaiah returns, the Trojans may look to replace Allen with a forward who can score.

The Trojans don’t have a true point guard, though they have at least four players who can handle and distribute the ball. USC may continue look to to the portal to fill that void.

The Transfer portal approached 1,500 players at its height before recent commitments, which averages out to four players per Division I school. Even though many high profile players have found new homes the great majority of players are still in the portal. Let’s break down the USC roster and see if there are needs, keeping in mind that it will be hard to find minutes for all of the 12 (or 13) current players and the Trojans could lose players who don’t see the court; Noah Baumann transferred for that reason and found a new home at a major program with the Georgia Bulldogs.

The Trojans do not have a true point guard but have three combo guards and one or possibly two point forwards. The big new addition is Rejean “Boogie” Ellis from Memphis. A very quick player, he improved in most areas this past season over his freshman year, but averaged only 1.5 assist against 1.1 turnovers this past season. The Trojan staff may try to convert him into a true point guard, but he is a natural scorer and likely the best scoring threat at guard for this coming season. Top point guards can do both like McKinley Wright and Remy Martin.

Ethan Anderson’s minutes decreased last season though his shooting percentages remained constant. He averaged 4.2 assists as a freshman and 2.7 last season. Andy Enfield said several times during Ethan’s freshman season that he was the biggest surprise on the team. Many question whether he has true point guard skills, though no one questions his toughness.

Freshman Malik Thomas is 6’3” and rose during the past year in the recruiting rankings to wind up at 83. He scored over 2000 points in his high school career and had some very big games on the AAU circuit. Malik is definitely more of a scorer than a distributor. Though considered a combo guard he had an assist to turnover ratio of approximately 1:1.

Drew Peterson was called a point forward this past season for the Trojans. He averaged 2.7 assists and can distribute the ball but he isn’t a primary ball handler. Freshman big Harrison Hornery is averaging 7+ assists in his final high school season and if he gets significant minutes this year can help distribute the ball.

The Trojans are deep at the two position but most of the depth is provided by freshmen. Both Ellis and Thomas likely more naturally fit here.

Reese Waters saw very limited action for the Trojans in the second half of the season after graduating from high school a year early. He is the highest ranked Trojan freshman at number 50 and is 6’5” and 210 pounds. Reese averaged 17 points, 10 rebounds and over 3 assists as a high school junior and is able to score at all three levels.

Kobe Johnson is a freshman from Wisconsin. At 6’3” and 170 pounds he was ranked in the mid 200’s but played better than his ranking and had a great senior season. He averaged over 26 points, 10 boards, 4 assists and 2 steals. He is projected as a shooting guard though he could get a look at the point.

The Trojans return all of their core of wings in Drew, Isaiah White and Max Agbonkpolo. Max has the most natural talent but has been very sporadic shooting the ball and needs to improve his consistency. He is the most athletic, the quickest defender and the tallest of the group. Drew and Isaiah have very different games but both can score and rebound. Isaiah gets his rebounds on the offensive end and Drew mostly on defense.

This group will have the biggest fall off from last season. Even if the Trojans can get the same number of points from the front court, which is doubtful, Evan’s defensive presence can’t be replaced. If Isaiah Mobley returns he will start, likely along with Chevez. Isaiah would appear to be a player who can make significant improvement on the offensive end, which he started to do in the final month of last season. If he doesn’t return to SC the drop off in production will be significant.

Josh is 6’11” and averaged 8 points, 7 rebounds and 2.5 blocks in his one season at Long Beach State and was the Big West Conference Defensive Player of the Year. He makes a high percentage of his shots but doesn’t leave the paint on offense. He can be considered a taller and less polished Chevez and needs work on his offensive game, but is a good post defender.

Boubacar is a tremendous athlete and may become a star. At 6’10” and 200 pounds he is built like a smaller Evan. He averaged 25 points and 17 rebounds as a high school senior but was largely overlooked in the recruiting process, having played basketball only a few years. After he signed with the Trojans a lot of analysts said he may have been the most underrated and fast rising prospect in his class. He has very long arms, and a good jump shot from 12-15 feet and is very quick off his feet. He may earn significant minutes this season.

Harrison Hornery is a 6’10”, 230 pound freshman forward from Mater Dei. In limited games so far this season his production has soared. In one recent game he scored 29 points and added 7 rebounds and 6 assists. In limited games he is averaging 19 points, 8 boards and 7 assists. Harrison is known as a good three point shooter and plays on the perimeter a lot on offense though he has stepped up his game inside this year.

USC will have a number of young and talented players on the roster this coming season plus a good compliment of veterans. If the Trojans bring in a veteran point guard it may improve the team this year but reduce the playing time of the three freshmen and in today’s world lead to player transfers. Likewise in the front court. If Isaiah returns the Trojans will have a front court leader who hopefully can expand his offense but Enfield will need to find minutes for the young bigs to develop.

I’m guessing that Enfield has a good idea whether Isaiah will return. With his father on the coaching staff it seems safe to assume they have both been very candid with the head coach. A recent draft projection listed Isaiah as the 92nd best prospect, which means there are 31 players ahead of him who won’t be drafted and 61 who won’t get a guaranteed contract. Isaiah played much better in the final month and could possibly wow the scouts but even players drafted in the second round do not get guaranteed contracts. I expect Isaiah to return and continue to improve and look to the 2022 draft.

I expect the Trojans will continue to look for a bona fide point guard who they are confident can help them this season. Signing a prospect who needs development wouldn’t make sense with the young guards on the roster.

One final note. The Trojans do not yet have any commits for 2022. Chavez and likely Isaiah will be gone from the front court so USC will need at least one young big to add next year. Isaiah White is the only wing or guard who will definitely be gone after next season. Unless the staff believes they will suffer defections they should be very selective on who they sign. At this point only a few top 100 high school players have publicly said they are considering USC, but Enfield and staff have been very good at finding under the radar players who contribute. None of the five transfers signed last Spring were considered high prospects.

It will be interesting to watch what happens over the next several weeks.