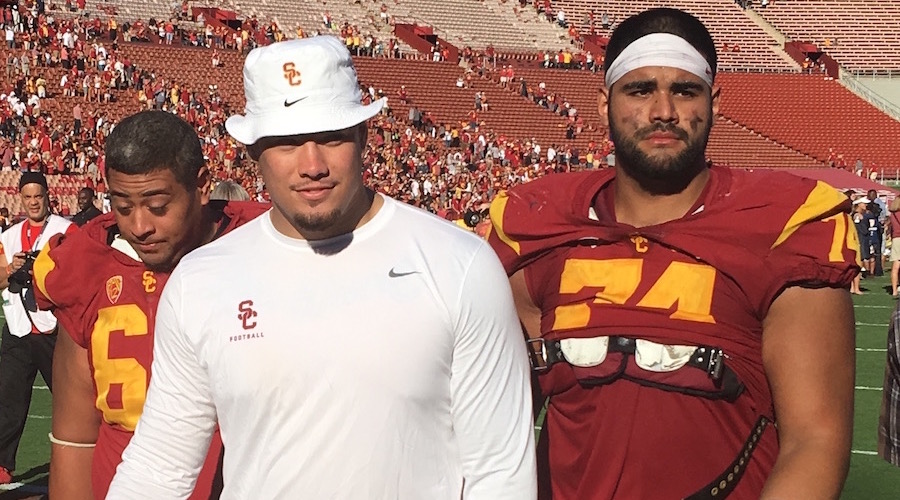 Much has been made this off-season about the moving parts along the Trojan offensive line being a key component to come together for the 2017 season, primarily because of the need to replace three starters who have moved on to the NFL.

While I certainly agree that this is the biggest USC issue heading into fall camp, there was an interesting article today from Phil Steele that indicates the Trojans actually fall into the middle of the pack when it comes to returning offensive line experience. Steele is a respected college football writer who specializes in pre-season breakdowns and analysis, and today he looked at career starts along the projected 2017 offensive line with the Trojans ranked at #46 in the nation (6th in conference) with 73 career starts. Washington is the most experienced line in the conference with 91, followed by Arizona (89), UCLA (85), Colorado (83) and Oregon (77). For what it’s worth, San Jose State is the most experienced in the country with 125 returning starts.

The starts for the Trojans break down as follows (per the usctrojans.com website):

That total comes to 72, so there is a one-game discrepancy with Steele’s numbers, but the overall breakdown is still relatively the same. One of the issues for the Trojans is that they are top-heavy with experience for three players in Talamaivao, Lobendahn and Falah, and all three of those players missed time in spring ball due to injury. The forecast is optimistic for all three to be back for fall camp but it will certainly be a situation worth watching when so much of your veteran core is represented in those three guys.

Viane is the most established guy in terms of starts by a wide margin and you can’t understate how important that is to have someone with that kind of experience coming back. He had bicep surgery in spring and is expected back right around the start of camp.

Toa has also started a lot, especially when you consider how much time he’s missed due to knee injuries. And as much as anyone on the line Toa is viewed as the leader of the group, it will be nice to have him back in the line-up. During the first PRP of the summer last week we saw Toa lining up at right tackle which, ironically, is the only spot along the line where he hasn’t started a game yet for the Trojans.

Even though Nico has basically only been the starter for one year I look at him as an established veteran because he’s been so solid. It also says something that Nico was playing well enough that the coaches (at least so far) are looking at moving Toa to another spot. Toa opened the 2016 season as the starting center and many thought that would ultimately be his best spot. The nagging injury issue for Nico is with his back but he was able to go at the end of spring.

Chuma Edoga takes over at the all-important left tackle spot with four starts under his belt, two each at left and right tackle. This seems like a natural time for Chuma to assume a full-time starting role after paying his dues, especially with the reports coming from inside the program about his dedication and maturity.

The final spot will likely come down to Chris Brown or Roy Hemsley, with Brown lining up as the left guard starter last week in the PRP. Brown does bring one edge when it comes to a couple games experience as a starter.